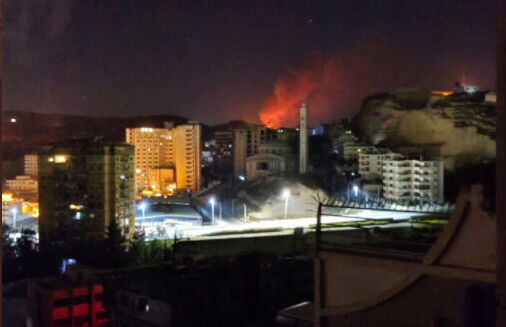 Israel conducted its second round of airstrikes in Syria this week on Thursday morning, according to official Syrian media.

The strikes targeted the Al-Qusayr region in Homs Province and caused material damage but no casualties, the Syrian Arab News Agency (SANA) reported, citing a Syrian military source. They were launched from Lebanese airspace, according to the report.

According to the U.K.-based Syrian Observatory for Human Rights (SOHR), a war monitor group with activists on the ground in Syria, the attacks destroyed arms and ammunition depots belonging to Hezbollah in the Al-Dabaa/Al-Qusayr region southwest of Homs city, and did cause casualties.

On Monday, SANA reported that Israel had struck targets in the As-Safira region to the southeast of Aleppo. According to SOHR, the strikes targeted “Syrian regime defense factories,” as well as an Iranian base and weapons warehouses used by Iran-backed militias. No casualties were reported in Monday’s strike.