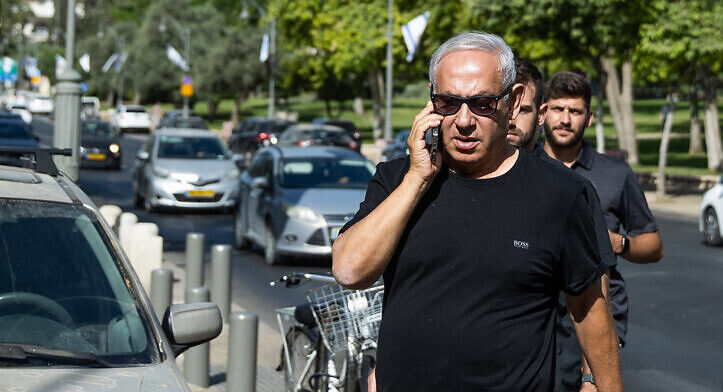 Israel’s government is marking its one-year anniversary. But there is little internal celebration and less, if any, external fanfare. Indeed, the coalition is hanging on by the proverbial thread. It may not survive the month. Then again, it might. Israeli politics, full of twists and turns and inherent instability, at its finest.

The talk of the town is currently concentrated on possible elections—and, in what was nearly unimaginable just months ago, the prospect of opposition leader Benjamin Netanyahu emerging as Israel’s next prime minister.

How we got here

The coalescence in mid-2020 of Israel’s most ideologically diverse coalition ever—which includes eight parties spanning the political spectrum from, ostensibly, the far left to the hard right, with a sprinkle of Islamism mixed in for good measure—was welcomed with a collective sigh of relief by a public exhausted by four elections in the previous two years. The political gridlock and turmoil that had gripped the country for what seemed like an eternity had been broken.

The 12-years-plus tenure of Netanyahu—whose trial on three separate cases of corruption was in full swing—had ended. Most Israelis, even those adamantly against the new coalition, appeared ready to refocus their energies from stasis in Jerusalem to tackling acute and potentially mortal dangers, such as Iran’s push to become a nuclear power and the coronavirus pandemic.

To reach this point required political machinations the likes of which have defined Netanyahu’s career (an irony that was apparently lost on his critics). Backroom dealings, ideological compromise and, ultimately, elevating Naftali Bennett to the premiership via a rotation agreement with centrist Yesh Atid chief Yair Lapid. This despite Bennet’s right-wing Yamina Party winning just seven seats in the 120-member legislature in the preceding election. Under the terms of the agreement, Lapid would serve as foreign minister until assuming the mantle of leadership in August 2023.

The Islamist Ra’am Party; left-wing Meretz and Labor; center-left Blue and White; and center-right Yisrael Beiteinu and New Hope would hop on the bandwaggon to form Israel’s 36th government.

That their lone unifying principle was a burning desire to dethrone “King Bibi,” as Time magazine famously dubbed Netanyahu in a play on his nickname, portended a bumpy road ahead.

“The primary reason for the coalition’s ongoing struggles is its composition—it is very unnatural … hard to think of stranger bedfellows,” Danny Ayalon, a former Israeli deputy foreign minister and ambassador to the United States, told JNS. “There is no real policy interest that binds them together other than political survival, because none of the parties want elections at this point.

“That said, the government since its inception has managed to do many good things, including streamlining processes and making reforms in the defense, education, health care and transportation establishments. They came to work, which was a breath of fresh air,” Ayalon added.

Given this pragmatic attitude among the coalition parties, Ayalon said that the government could be less fragile than it appeared.

“I am not certain that the coalition’s fall is imminent. It looks very fragile, but it’s not over until it’s over. When push comes to shove, they may find compromises or steer clear of controversial issues,” he said.

There have, in fact, been successes along the way, including the passage in November of a national budget for the first time in over three years, and, last month, sweeping legislation officially defining the rights of people suffering from a range of disabilities and which came with a $599 million financial development package.

But none of these accomplishments managed to temper the choppiness of the uncharted political waters.

Consistent disagreement has defined this coalition (as it has nearly all Israeli coalitions. Issues of contention have included the Palestinian issue, the associated diplomatic process of which was essentially placed on the backburner from the get-go; illegal construction in Bedouin communities; settlements; the Temple Mount; and on and on.

Until, in April, the coalition lost its one-seat parliamentary majority when a member of Bennett’s own party bolted. Then, on Monday, the government failed to renew a bill extending Israeli criminal and various elements of civil law to citizens living in communities in Judea and Samaria, that had essentially been rubber-stamped by the Knesset every five years since the aftermath of the 1967 Six-Day War.

The bill was voted down 58-52, with two members of the coalition, Meretz’s Ghaida Rinawie Zoabi and Raam’s Mazen Ghnaim casting their ballot against it.

Observers have warned of total chaos unless the renewal bill is passed before the related legislation expires at the end of June.

All the while, reports surface almost daily of more and more MKs readying to jump ship.

In fact, Justice Minister Gideon Sa’ar, who formally advanced the bill to extend the Emergency Regulations–Judea and Samaria, Jurisdiction and Legal Aid Law earlier this week stated on Tuesday that his New Hope party’s partnership with Ra’am “may have exhausted itself.”

Perhaps not coincidentally, rumors have been swirling that Sa’ar, who has repeatedly vowed not to sit in a Netanyahu-led government, is deep in negotiations with members of the former longstanding premier’s Likud Party. If a deal is actualized, Netanyahu could potentially oust Bennett by forming a new coalition of 61-plus parliamentarians. This would circumvent the need to hold elections.

Amid the jockeying, the Israel Democracy Institute (IDI) on Tuesday released a study confirming widespread public displeasure with the government’s handling of key issues. The study also paints a less-than-rosy picture of the future political prospects of the ruling factions.

The survey found that among Israelis who voted for parties in the coalition, only 46%, 41.5% and 35.5% believe that over the past year there has been an improvement in the critical spheres of foreign policy, the economy and defense, respectively. Notably, 48% of these respondents said that tensions between sectors of Israeli society had worsened over the past 12 months; a mere 28% said circumstances had improved.

Meanwhile, a least 70% of those who voted for parties in the opposition said the situation had deteriorated across all of these domains.

One of the raison d’etres of the Bennett-Lapid “change” government was to “get the country back on course” and to “heal” what they claimed was an ailing society reeling from a decade-plus of divisive policies spearheaded by Netanyahu.

The public’s verdict is in.

“The biggest takeaway is that the voters of parties in the opposition are unanimous in their thinking that everything went wrong with this government in all walks of life,” professor Tamar Hermann, a Senior Research Fellow at IDI and co-author of the study, told JNS.

“While they are of one opinion—on the negative side,” she continued, “the voters of the parties in the coalition are divided and it is very difficult to mobilize a [fractured] political camp. There seems to be no sense of common purpose that goes beyond individual or party interest.”

And these competing interests continue to manifest in roadblocks, a reality that Hermann concludes “may result in the downfall of the government but not necessarily lead to elections.

“The political system in Israel provides for the possibility of a minority coalition,” she explained, adding, “or any member of the Knesset can form a 61-seat majority at any time—and it seems like Netanyahu is quite close” to being able to do so.

Netanyahu is, by all accounts, waiting not-so-patiently in the wings, his Likud having recently released this concise statement: “Bennett—go home. It’s over. It’s time to return Israel to the right.”

Even Netanyahu’s trial could be tilting in his favor, and there is a growing sentiment that the most serious charge against him—that of bribery, which comes with a mandatory seven-year exclusion from the political arena—might not stick.

“There will be nothing because there is nothing” is the mantra Netanyahu long ago adopted in relation to his legal issues. He repeatedly chanted it even when some of his most ardent supporters were writing him off.

So, too, did political enemies, many of whom now find themselves navigating a maze of a coalition that is perpetually on its last legs but cannot yet be counted out.

It would nevertheless be quite the development—and an increasingly plausible one at that—should Netanyahu’s slogan morph into, “”There will be something because there is nothing.””

With that something being a 6th term as Israel’s prime minister.