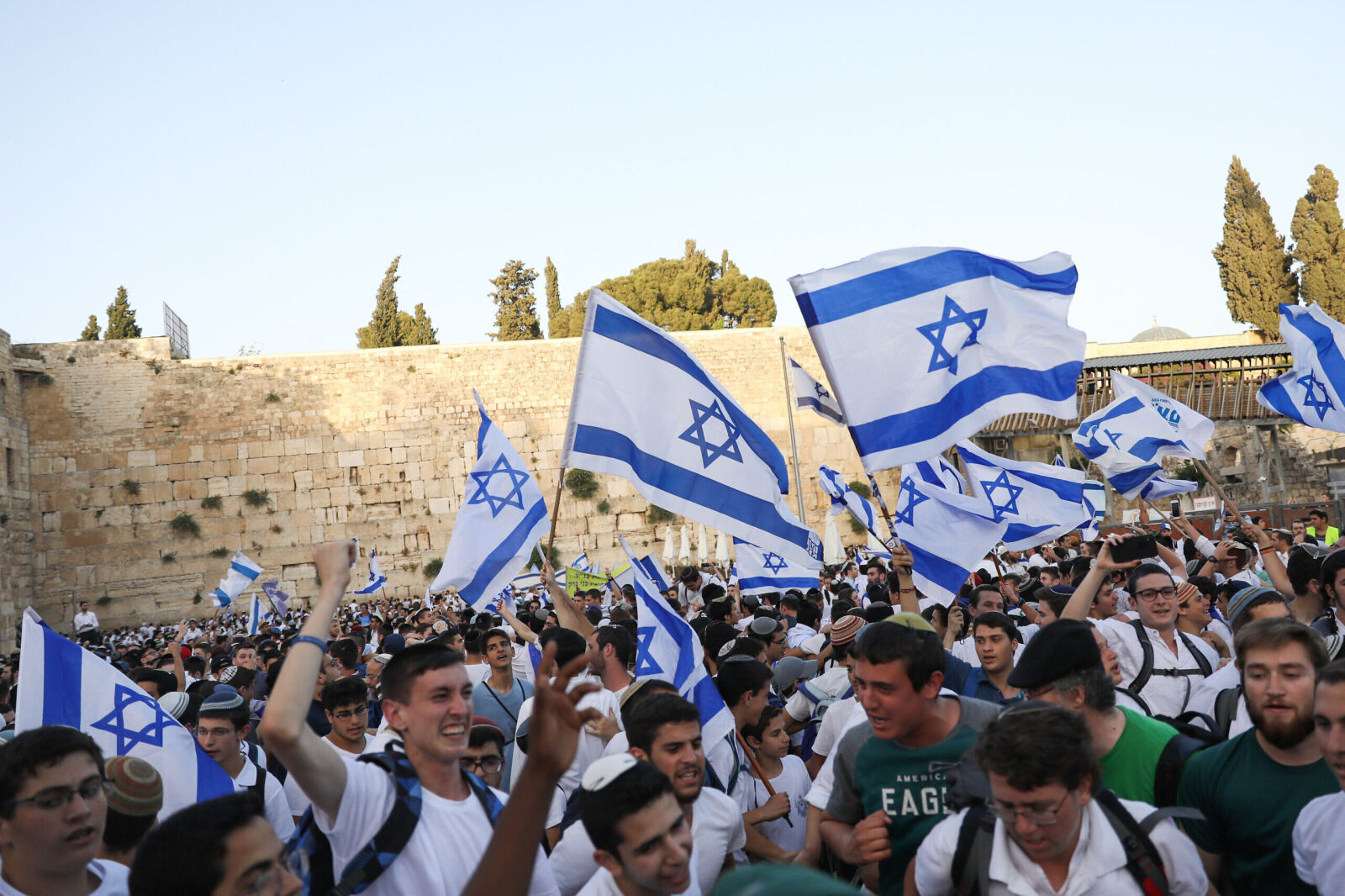 On Jerusalem Day, which begins this year on Sunday evening, the Jewish prayer of thanks is chanted to express our profound gratitude and joy at having our capital restored and united once again.

The bond between the city of Jerusalem and the Jewish people is profound. This love runs deep and has been expressed in a myriad of ways throughout the 4,000 years of Jewish history.

The Temple Mount in the holy city of Jerusalem is Judaism’s holiest site, and to this day, every Jew turns towards it to pray.

We temper our happiest moment—of celebrating with a bride and groom—with memories of the tragic destruction of our ancient Temple when we say under the chuppah (wedding canopy), Im eshkahech yerushalayim, tishkach yemini: “If I forget thee, O Jerusalem, may my right hand forget its cunning …” (Psalms 137:5).

And we join our profound personal sadness at a funeral with that of the mourners of our destroyed Jerusalem, Zion, when we say, Hamakom yinahem etchem b’toch sha’ar avelei tzion v’yerushalayim: “May God comfort you together with all the other mourners of Zion and Jerusalem.”

Some of our earliest experiences as a nation involve Jerusalem. From biblical times, we learn of King David dancing with joy as he brought the Ark of God to Jerusalem, to the City of David. While the city of Hebron was the first capital of Israel, it was David who subsequently established Jerusalem as the capital of the entire nation.

King Solomon built and dedicated the First Temple in Jerusalem with great pageantry. The nation would make pilgrimage and ascend to Jerusalem for holy festivals.

Then the unthinkable happened: the Babylonians destroyed our precious Temple: “By the waters of Babylon, there we sat and wept as we remembered Zion … May my tongue cleave to its palate if I do not think of you, if I put not Jerusalem above my highest joy.” (Psalms 137:1,6).

Almost 50 years later was the celebrated return to our beloved city: “So said Cyrus, the King of Persia … Any one of you of all His people, let him go up to Jerusalem that is in Yehudah and build the House of the Lord, God of Israel.” (Ezra 1:2-3).

The Jewish people lived and worshiped as a free and sovereign nation in the land of Israel, from the time Joshua reentered the land with the Israelites until the Babylonians destroyed the holy Temple in Jerusalem in 586 BCE. Seventy years later, the Jews rebuilt the Temple, which then stood for centuries, until the Romans destroyed it in the year 70 C.E.

To this day, Tisha B’Av on the Hebrew calendar, which marks the destruction of both the First and Second Temples in Jerusalem, is a day of national mourning for the Jewish people. We observe this as a fast day. We do not wear leather shoes; we sit on the floor as the Book of Lamentations is chanted.

Through every banishment and forced exile, the Jewish people prayed to return to their land, included the mention of Israel and Jerusalem in daily prayers and imbued each life-cycle occasion and festival celebration with the yearning for shivat tzion, a return to Zion, a return to the land of their ancestors. There they would rejoin the she’arit yisrael, the remnant of the people of Israel who had remained in the land from ancient times unto today.

From Spain in the 12th century, Yehuda Halevi cried, Libi b’mizrach, va’ani b’sof ma’arav: “My heart is in the East, though I am at the ends of the West.”

Jews have spoken of and longed for Jerusalem throughout the centuries.

As noted in the 1800’s by the physician and author William R. Wilde, “It doesn’t matter what a Jew’s status and rank may be, or how remote the land in which he lives. He still lives with the hope that one day he will ascend to Zion … When he approaches the city … he dons his most festive garments and falls prostrate on the ground, weeping and praying now that he has reached the longed-for goal of his pilgrimage … No son returning home after a long absence feels more ardent yearning and greater love … This is the authentic love of one’s homeland.”

By the mid-1800’s, Jews were living as a majority in Jerusalem. But Jordan, together with the armies of Egypt, Lebanon, Syria and Iraq, after waging a war of annihilation against the newly reestablished Jewish state in 1948, illegally occupied Jerusalem from 1948 to 1967. The Jews were then barred from those areas that were within the walls of the Old City, where the holiest Jewish sites are found, and where Jews had been living since those walls were built.

The Jews who had been living as a majority in Jerusalem since the middle of the previous century were expelled from their Jerusalem homes by the Jordanians, and the city of Jerusalem was divided in two for the first time in history. Synagogues were destroyed and Jewish cemeteries were desecrated.

Then, in 1967, besieged once again by hostile Arab armies, Israel liberated, recovered and reunited its ancient Jewish capital.

Yom Yerushalayim, Jerusalem Day, will be observed this year from Sunday evening, May 9 to Monday night, May 10. It is marked as a day of jubilant celebration when Hallel, the Jewish prayer of thanks, is chanted in order to express our profound gratitude and joy at having Jerusalem, our capital, restored, united once again.

The Jewish people’s love for Jerusalem has been expressed throughout the ages, from the poetry of biblical psalms to the verses of modern-day songs, such as “Jerusalem of Gold” by Naomi Shemer, a song whose evocative images of a people coming home to their beloved city has earned it the informal title of Israel’s second anthem. This is the song that the Israeli paratroopers joyously sang in 1967 upon reaching and liberating the Old City, the Western Wall and the Temple Mount, restoring Jewish access to and sovereignty in Judaism’s holiest place.

“We have returned to the cisterns

“A ram’s horn calls out on the Temple Mount

“In the Old City…

“Behold I am a lyre for all your songs.”

On Passover, Jews say L’shana haba’ah b’yerushalayim: “Next year in Jerusalem.” When building a home, Jews leave an unfinished corner to remember the destruction of Jerusalem. The ancient sages taught that 10 measures of beauty were given to the world; of these, Jerusalem was given nine.

These threads of love and longing traverse the layers of our history and bind together this ancient, modern, eternal city of Jerusalem, capital of the Jewish people, of Israel, for more than 3,000 years, with the generations of Jews who have come from lands the world over, to the Jewish homeland.

From the Jews of Yemen to the waves of East European Jews, to Iraqi Jews, Russian Jews, Jews from Morocco, Jews from North America and South America, to the Ethiopian Jews of Beta Israel, to the Bnei Menashe Jews of India; Jews of every color, who speak every language, who comprise the mosaic tapestry of modern Israel. This diverse, vibrant people joins together in our shared lashon hakodesh, our holy language of Hebrew, and professes in one united voice an eternal love for our city, our capital, for Jerusalem.

Yonina Pritzker served as the spiritual leader of Boston-area congregations for over two decades. With an emphasis on Israel education, she has worked at The David Project developing curricula related to Israel, was a research analyst at CAMERA (Committee for Accuracy in Middle East Reporting in America) and was a co-founder of Rabbis and Ministers for Israel.