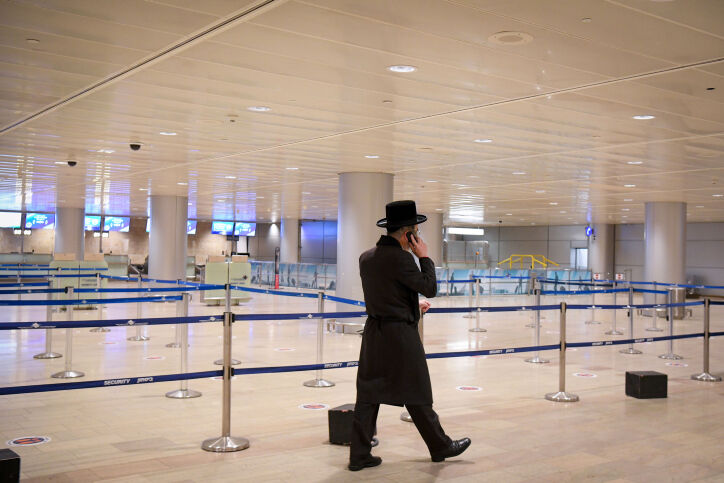 The unprecedented move is intended to keep out dangerous variants of the virus and buy time for the country's vaccination drive.

The Israeli government on Monday approved a Cabinet decision to close Israel’s skies to all arrivals for a week, with the aim of keeping out dangerous mutations of the COVID-19 virus and safeguarding the country’s vaccination drive. The shutdown is set to begin at midnight on Monday and remain in effect until Jan. 31, according to a government statement.

Under the shutdown, all foreign aircraft will be barred from entering Israeli airspace or landing at Ben-Gurion International Airport, though exceptions will be made for cargo planes, emergency aircraft and planes traversing Israeli airspace without landing. Departing flights will be limited to passengers traveling abroad for medical treatment, essential work, legal proceedings or family funerals, though the Health Ministry may grant exceptions for humanitarian or other reasons.

“We are hermetically closing the skies, apart from very rare exceptions, to prevent the entry of mutated viruses and in order to ensure that our ‘Back to Life’ vaccination campaign proceeds swiftly, enabling us to vaccinate more Israelis within a short time,” said Netanyahu at the start of Sunday’s Cabinet meeting. The Israeli premier emphasized that “no country” has yet introduced such a comprehensive shutdown.

During the week that Israel’s skies are closed, one million additional people will be vaccinated, said Netanyahu.

“We are thereby ensuring that the damage from the mutation, if it enters, and from additional variants, if they enter, will be much smaller,” he said, adding, “and of course, we will be able to open our economy.”

Israeli Health Minister Yuli Edelstein announced on Monday that more than a million people in the country have so far received the second dose of Pfizer’s BioNTech vaccine, with nearly 2.6 million having received the first dose. There were some 200,000 vaccines administered on Sunday alone, he said, adding, “This is the way to beat the virus!”

The day before, however, Edelstein noted that despite its impressive vaccination drive and the fact that the country is in the midst of its third national lockdown, the virus’s morbidity rate was decreasing very slowly. While failure to adhere to lockdown regulations no doubt played a role, he said, the slow decrease was most likely due to the spread of new, highly contagious variants of the virus.

During a meeting on Monday of the Knesset’s Constitution, Law and Justice Committee, Dr. Sharon Elroi Preiss, head of health services at the Health Ministry, called to extend the flight ban for a month. This, she said, was the only way to combat the so-called U.K. strain of the COVID-19 virus.

“We are in a problematic situation; the numbers are starting to go down, but we [the health system] are still very busy,” she said. “We are seeing a very rapid spread, at least 50 percent of the positive tests are the U.K. variant.”

Elroi Preiss called for the airport closure to be extended to one month to ensure that 3 million Israelis were vaccinated before the skies are reopened​. “We must buy time … I guess we will need a few weeks to allow the vaccination campaign to progress at a rapid pace so the majority of the population is vaccinated,” she told the committee.

She went on to explain that there are indications that the highly contagious U.K. variant leads to more serious complications than previous strains, particularly when it comes to pregnant women and children.

“Some 40 percent of the infections at the moment are among children, and when we came out of the second lockdown [in Oct. 2020], they [the children] were 29 percent of the infected population. We are seeing an increase in the percentage of infected students in first and fourth grades and we are concerned about that,” she said.

Meanwhile on Sunday, Israel’s Channel 12 reported that an individual who tested positive for COVID-19 upon his return from Dubai had infected 180 people, among the largest known chains of infection in the country to date.

Following an epidemiological investigation, the Israel Defense Force’s Homefront Command was able to contact everyone the individual had come into contact with, not only in Israel but also in Dubai, according to the report.

Caption: A lone traveler at the almost empty Ben-Gurion International Airport on January 24, 2021.
Photo by Flash90.

Will a US-Saudi rift affect Israel?

The solution to de-legitimatization begins in Israel