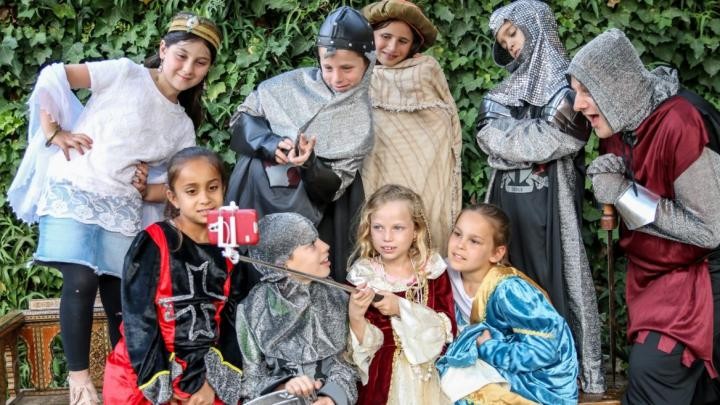 Israel is said to have one of the highest museums-per-capita ratios in the world. If you’re visiting, it is impossible to visit every museum on one visit, so you have to prioritize.

There are must-see museums, peculiar museums  and museums for the whole family.

ISRAEL21c highly recommends putting the following 11 museums on your family itinerary in Israel:

Nahum Gutman was a painter, illustrator, sculptor and children’s author whose family donated his works to the Nahum Gutman Museum of Art. Exhibits have an interactive element and are geared to younger visitors. This museum is in the picturesque Neve Tzedek neighborhood on a little street called Shimon Rokach (not to be confused with Rokach Road, a main thoroughfare that is also in Tel Aviv). 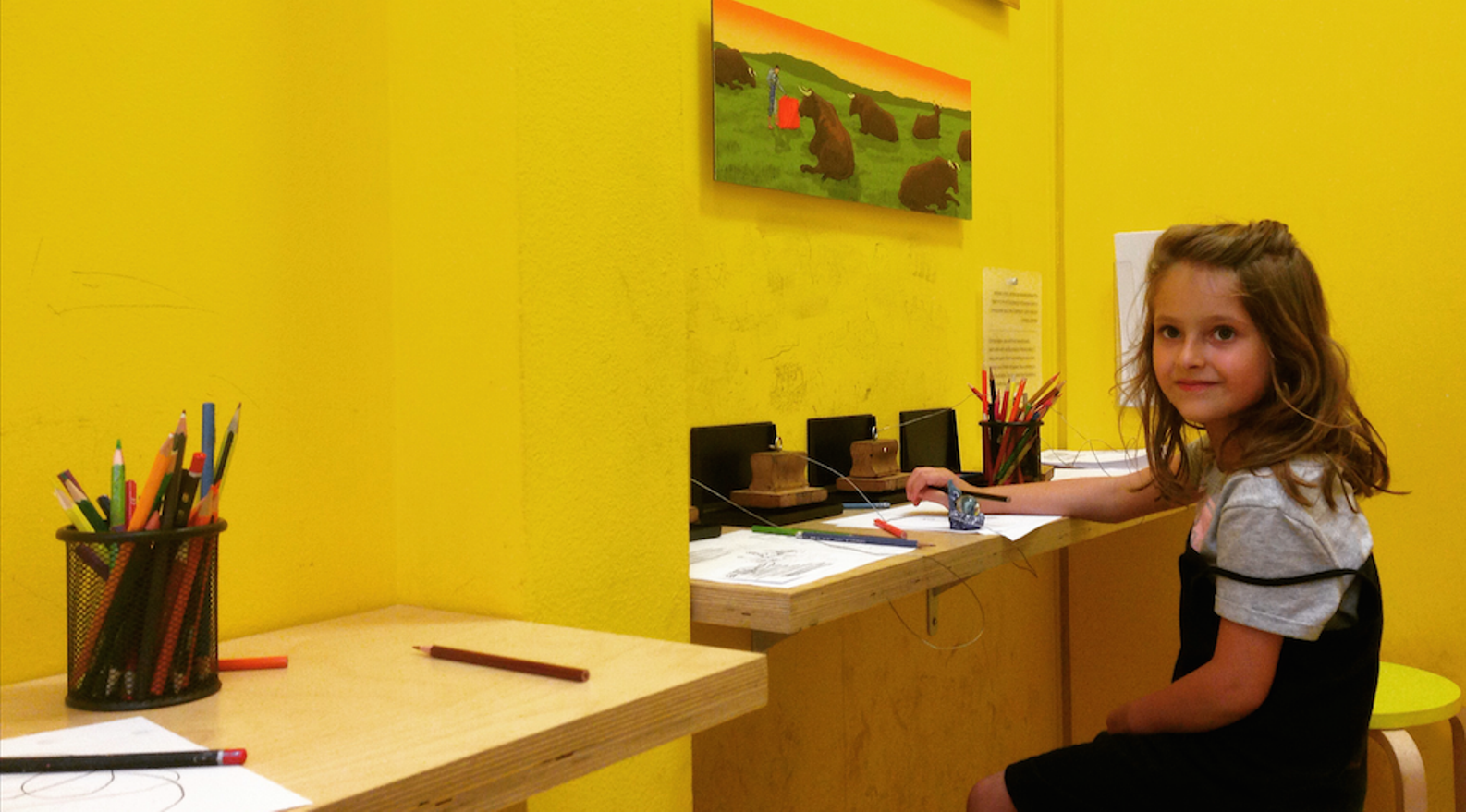 MadaTech is the place to explore, experience, discover and learn science through play. It’s all hands-on at this museum, with dozens of science-themed exhibits and 3D movies, plus an outdoor, hands-on Noble Energy Science Park. Even the location is cool — the museum is housed in the Technion-Israel Institute of Technology’s first home.

The Israeli Children’s Museum focuses on promoting tolerance, respectful dialogue and non-violent communication. Book ahead because all activities are guided (English tours require at least four participants, including adults).

Activity tours are divided by age. For ages 2.5 to 4, “A Trip with Yanshul” introduces ages to the concepts of shyness and friendship and “Following Butterflies” presents different types of animal families while examining the concepts of similar and different. 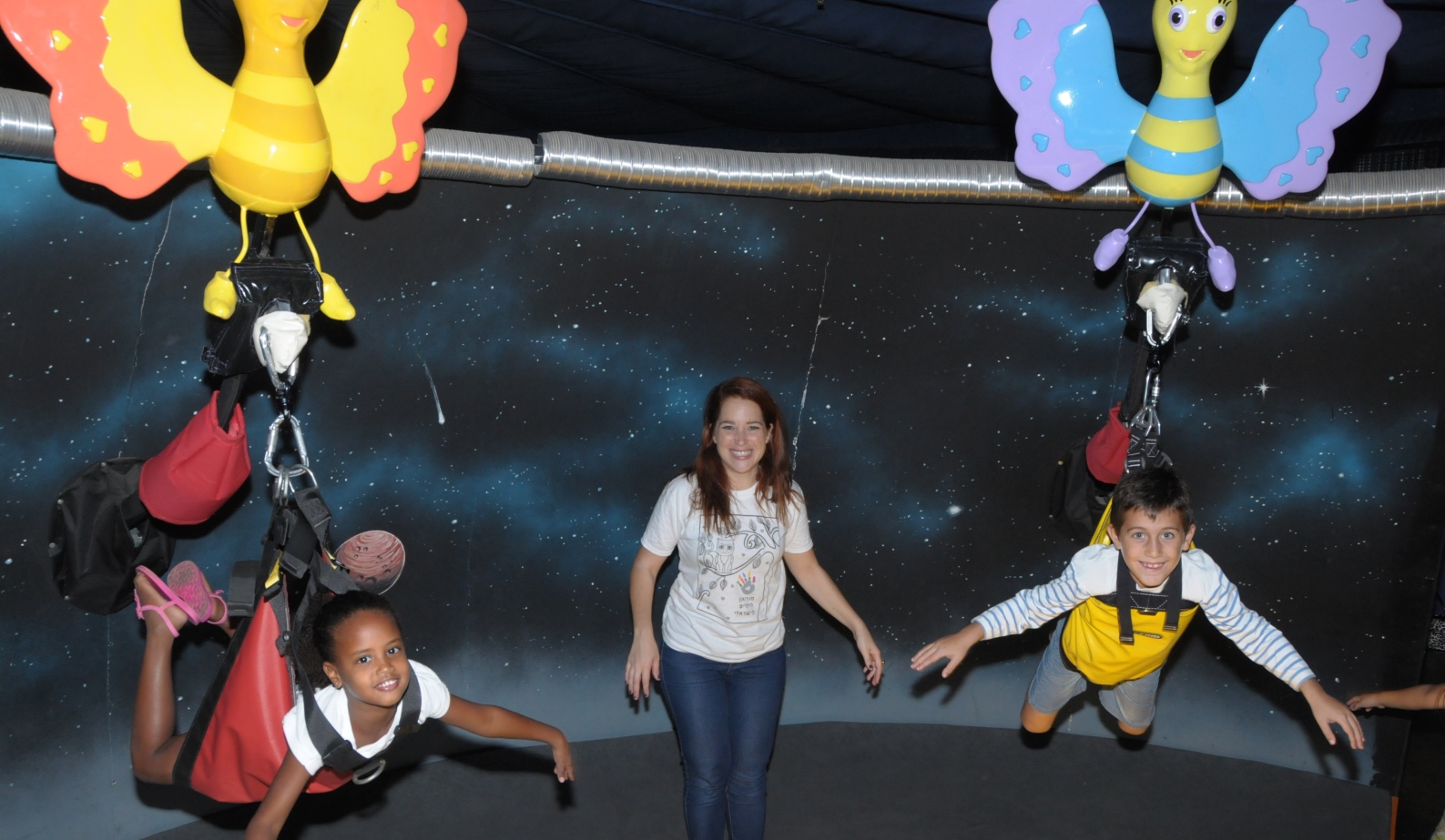 “The Kingdom of Time” for ages 4 to 6 follows the changes in the world around us as a result of the cycle of life, and deals with growth and change.

For ages 5 to 14, “The Magical Mystery Tour” offers an interactive intro to The Beatles and their cultural and artistic impact. Recording and editing a music video is part of this tour.

“The Magical Forest” helps kids aged 6 to 8 discover the world of emotions. For ages 8 to 12, “The Aliens” takes kids into an outer-space world that runs on the power of thought.

Children from 9 and up can be included in group tours of the museum’s separate experiential museums for adults: Dialogue in the Dark, Invitation to Silence and Dialogue with Time.

This outdoor science museum on the campus of the Weizmann Institute of Science has some 80 hands-on exhibits that will get kids talking excitedly about the laws of physics, solar energy, water power and natural elements. The science garden includes a solar furnace that can instantly set wood on fire and water sprinklers that turn into a full-circle rainbow.

Lunada Children’s Museum, open daily and geared to ages 1 to 12, is housed in a 4,000-square-meter, three-story facility that includes eight knowledge zones with more than 50 exhibits and installations in addition to unique outdoor areas.

Each knowledge zone allows children to practice different skills, such as time management, money and food, interpersonal communication, culture and art, the solar system and unique features of planet Earth. At Lunada, both kids and their parents leave their shoes at the door! 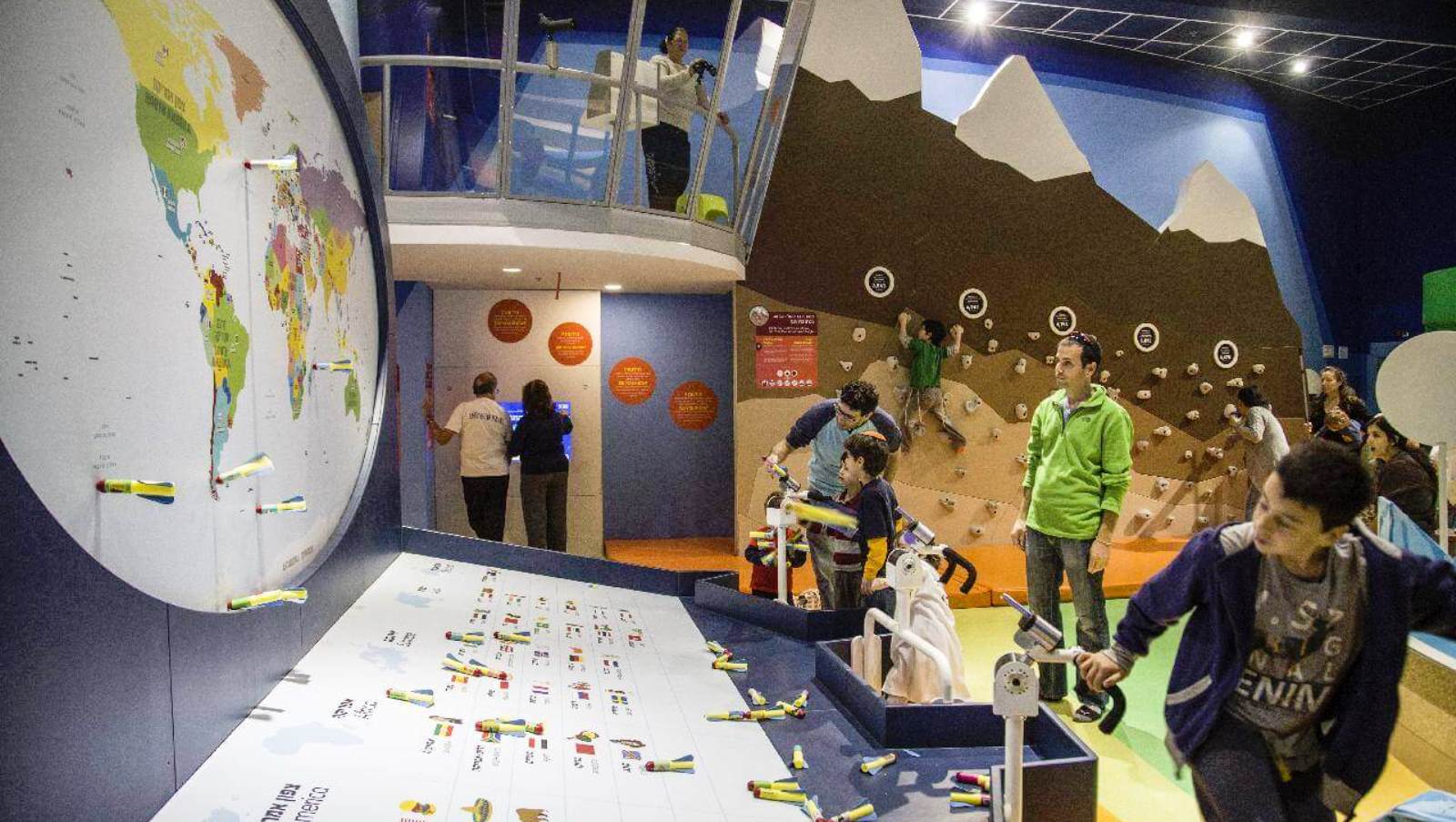 Part of the “Explore the World” knowledge zone at Lunada Children’s Museum in Beersheva. Photo: courtesy

Bloomfield Science Museum is designed for children of “supermarket age,” meaning if they’re old enough to appreciate going grocery shopping with you, they’ll will find something of interest here. Every day there are guided tours, hand-on workshops, science demonstrations and talks. Children under five get in for free. 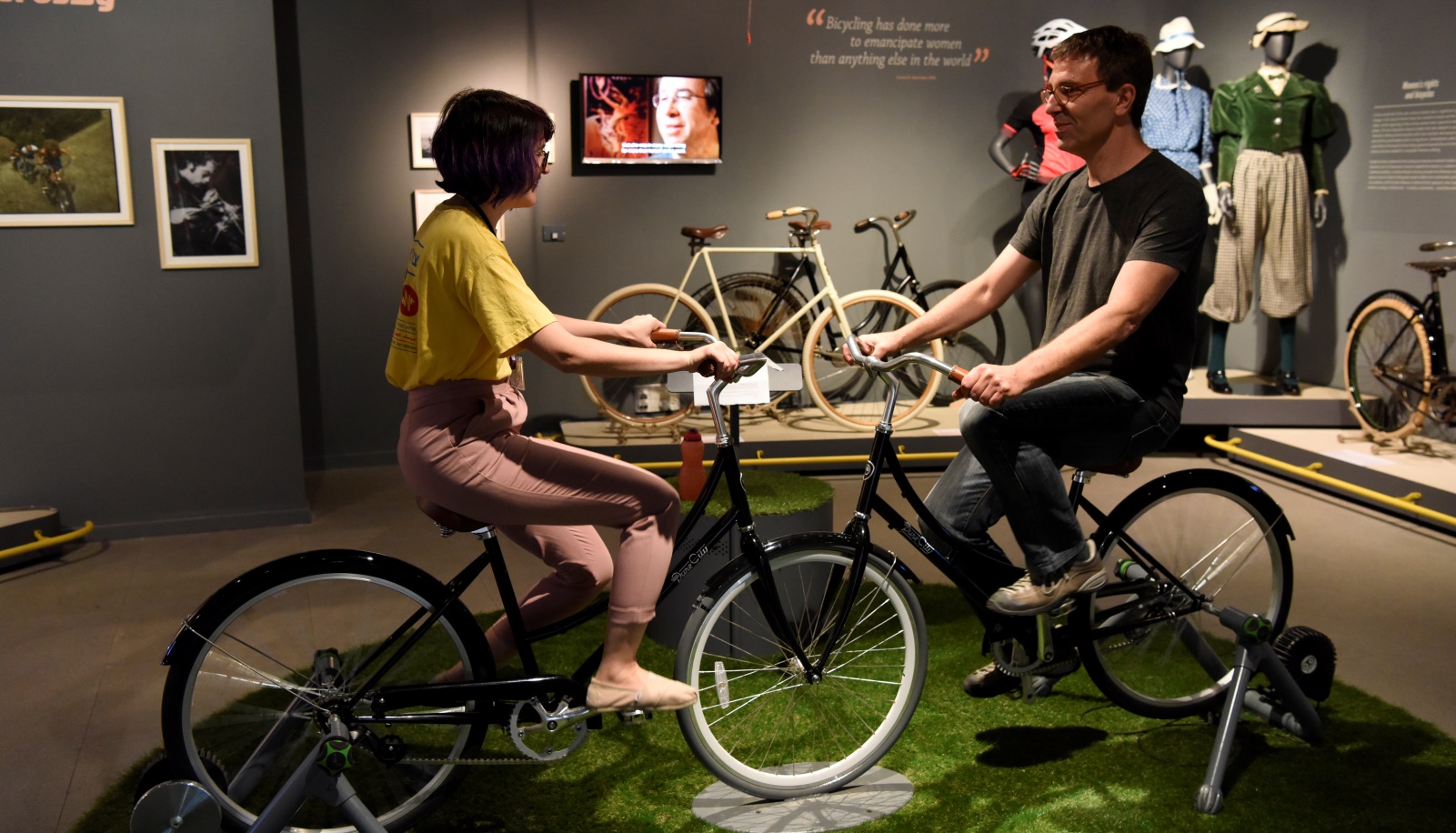 The “2×200” bicycle exhibit at Jerusalem’s Bloomfield Science Museum runs through May 2018. Photo by Avi Hayon

A new exhibition through May 3, 2018 celebrates the 200th anniversary of the bicycle. Demos, activities and family workshops include “legs-on” cycling arenas where children and adults can try dozens of special bicycles; a spinner construction workshop; and guided tours of bicycles made of unusual materials such as bamboo and cardboard.

The Tower of David Museum of the History of Jerusalem is in a medieval citadel near Jaffa Gate, the historic entrance to the Old City. Children delight in climbing the towers and discovering the hidden passages of the fortress. They can hold 3D models and touch stones from the time of Judah Maccabee, King Herod and the Crusaders, with no concern about breaking precious ancient artifacts. Pick up a self-guided family activity game in English at the entrance. 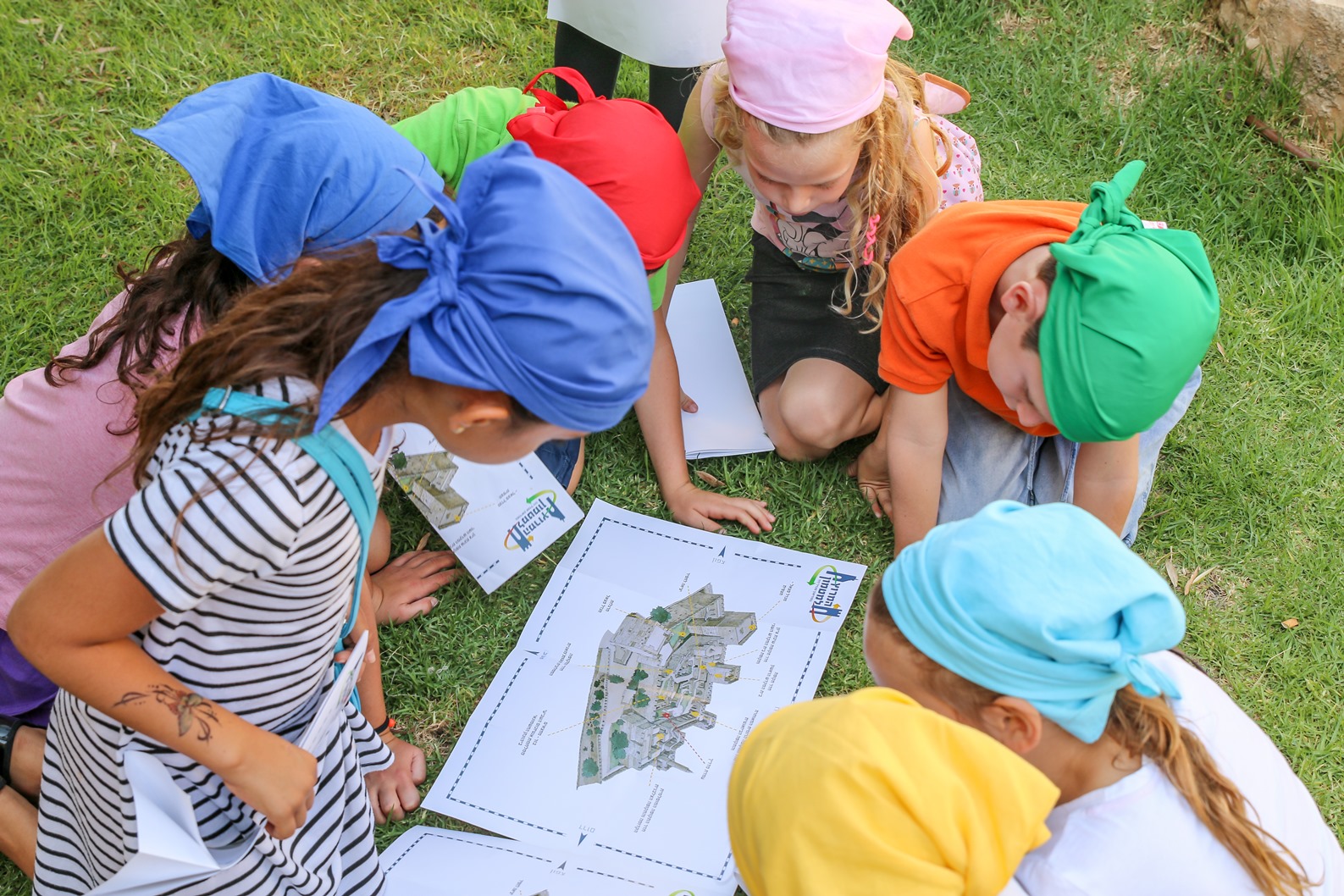 Kids enjoying a game of exploration at Tower of David Museum. Photo: courtesy

At the Youth Wing of Janco Dada Museum in the Carmel Mountains artists’ colony of Ein Hod, children from 5 and up (including those with disabilities) have a choice of workshops as well as demonstrations by village artists. In the Dadalab, kids and adults can experiment with Dadaist techniques including collage, assemblage, ready-made sculpture and performance art. Programs are offered in Hebrew, Arabic, and English. 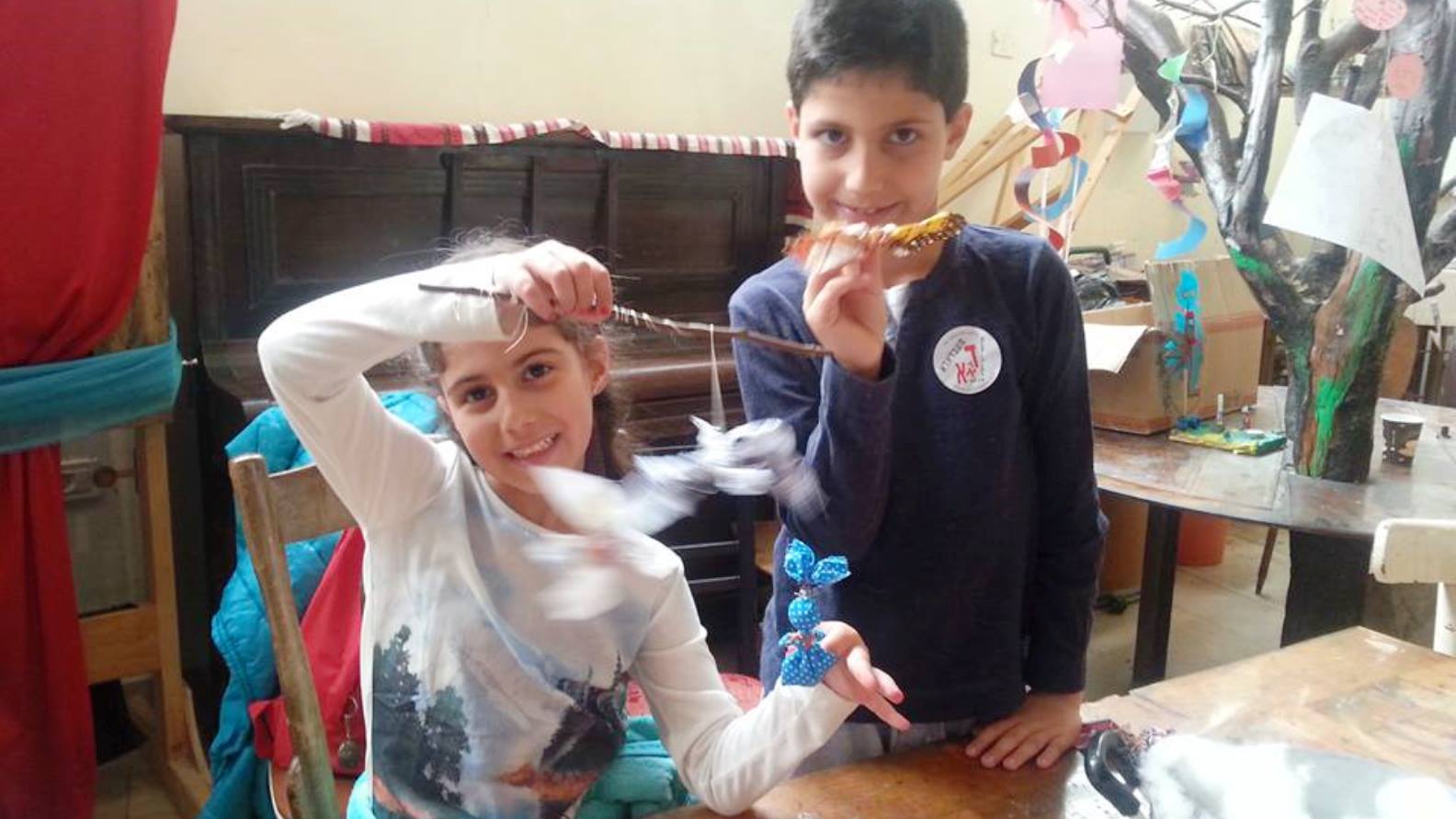 The Olympic Experience Museum puts the focus on sports and innovation. Like the Israeli Children’s Museum in Holon, visitors must join a group tour to get around the interactive, multimedia exhibits dedicated to the history and highlights of Israeli sporting achievements at the Olympic Games. Tours are offered in English and Hebrew. Reservations: +972-(0)3-795-5900 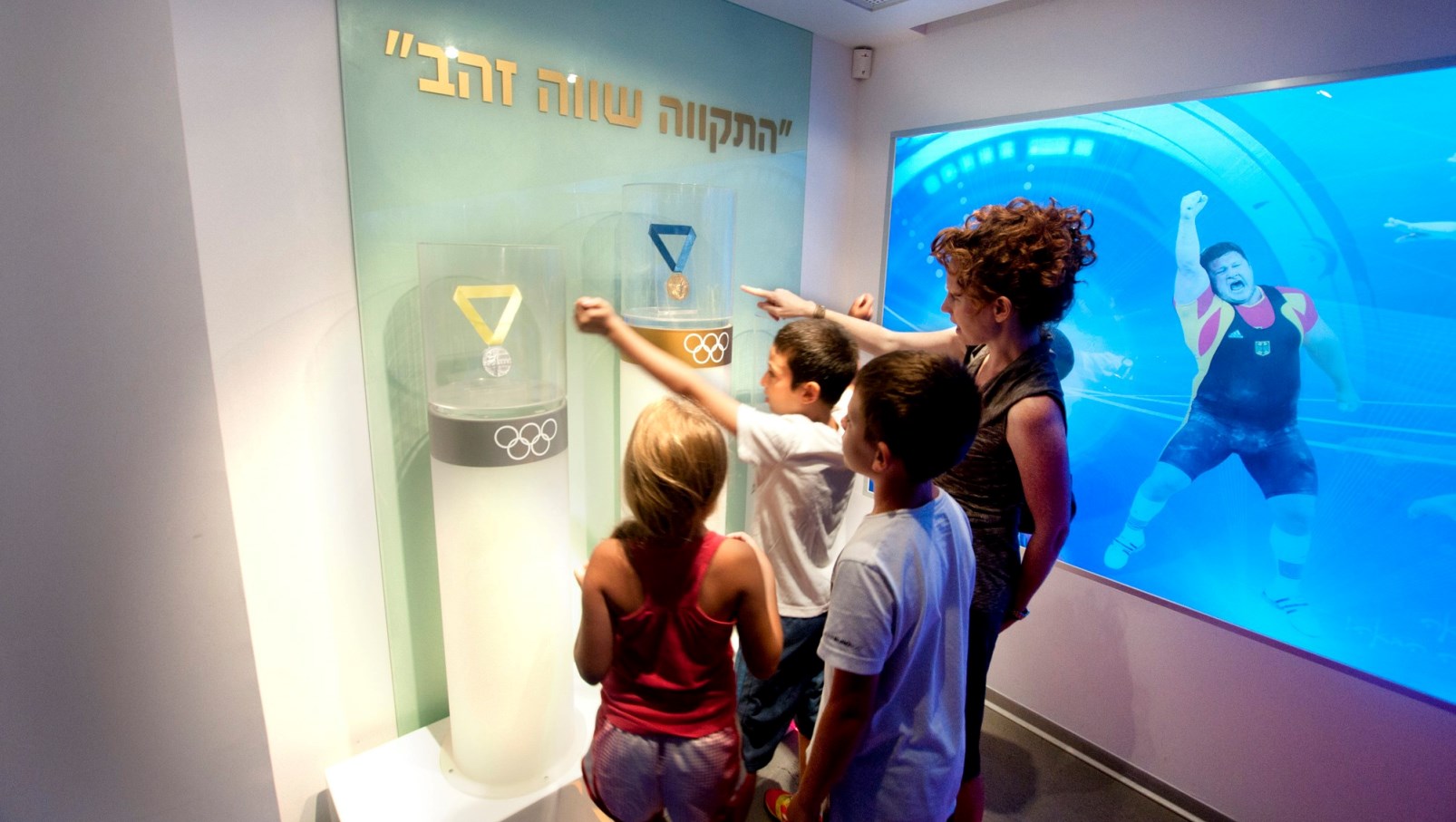 The memorial and museum dedicated to Ilan Ramon, Israel’s first and only astronaut, who died in the 2003 Columbia space shuttle disaster, is located in the Visitor’s Center at Ramon Crater (Makhtesh Ramon). 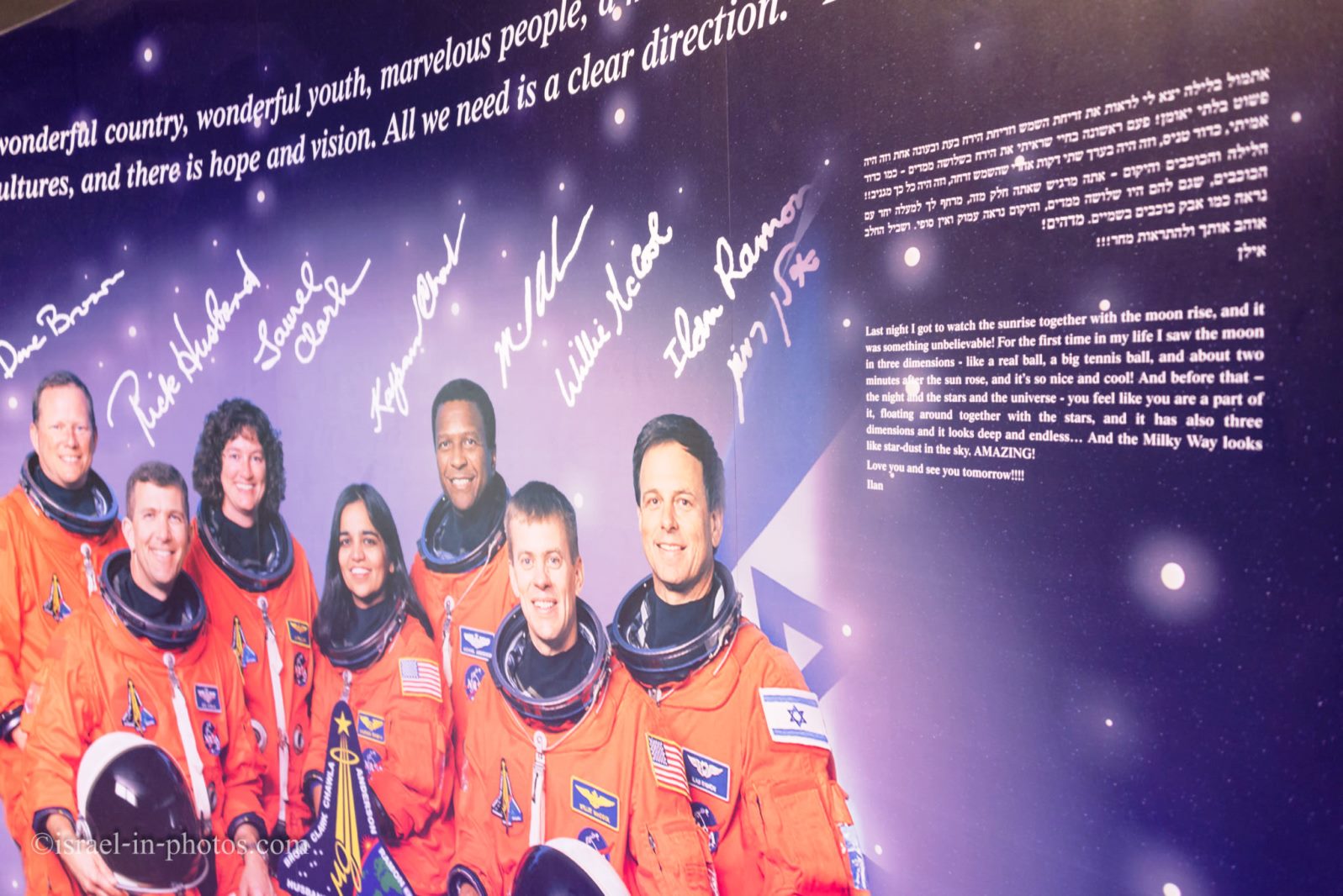 The self-guided tour takes about an hour and goes from Ramon’s days as an honored Israeli fighter pilot to his NASA days and his Columbia mission. The museum sits on a cliff of the crater, for which Ramon is changed his name – he was born Ilan Wolferman — because of his love for the Negev desert.

While the museum is a memorial, it does not leave young visitors feeling sad but rather optimistic that maybe one of them will be the next Israeli astronaut.

The Biblical Museum of Natural History is an interactive edutainment initiative — part museum, part zoo. Visitors take a 75-minute guided tour (English or Hebrew) that begins with a film and presentation explaining the idea behind biblical natural history, then moves to hands-on experiences with taxidermy, old skulls and bones, live reptiles and a petting zoo. Visits are by appointment only. Click here for more information. 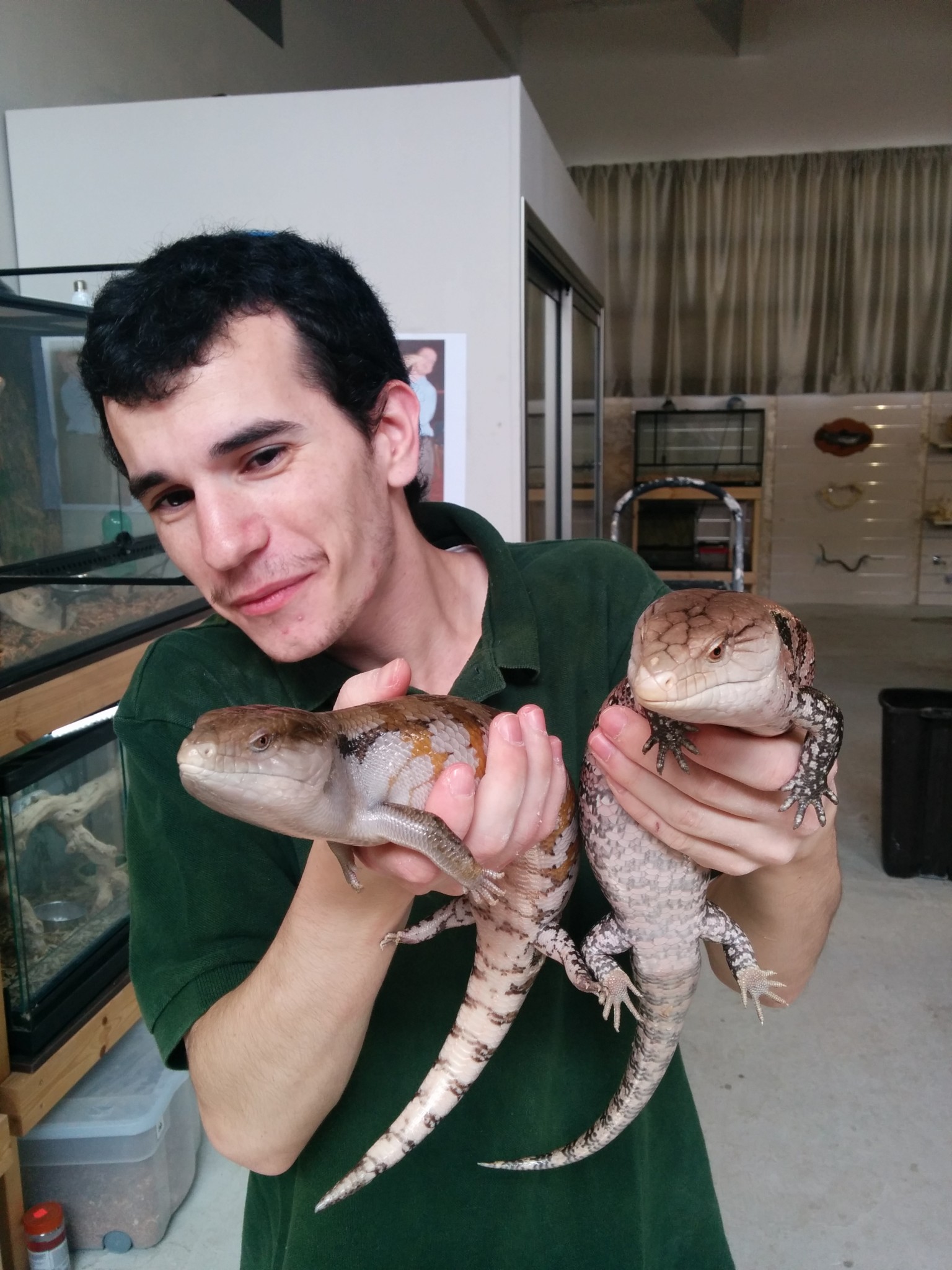