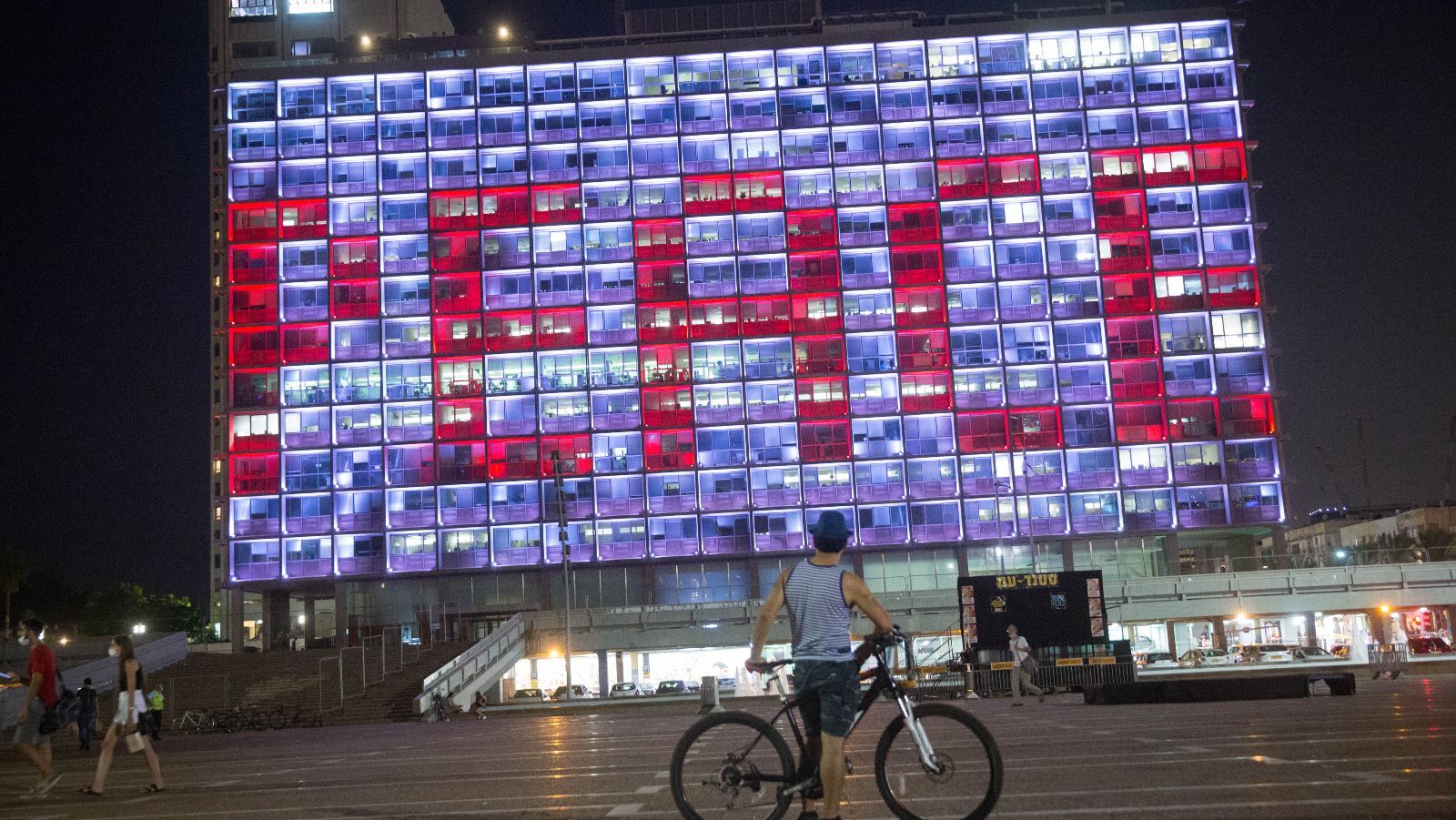 Ahead of the first anniversary of the Abraham Accords, we’re looking at some of the deals many people don’t even know about

Almost a year into the Abraham Accords, dozens of companies, foundations and government offices from Israel and the United Arab Emirates have established ties, reached agreements and inked deals in an array of fields.

Think venture capital, endangered wildlife and everything in between, not to mention the July 14 inauguration of the UAE embassy in Tel Aviv.

To mark the first anniversary of the historic accords signed on Sept. 15, 2020, we’ve highlighted the most interesting deals to have come out of the peace pact.

Most important things first: shoes. Immediately after the announcement of the Abraham Accords, Israeli budget footwear chain Scoop announced that it will open five stores in Dubai and Abu Dhabi, the first such endeavor for an Israeli retailer. But Scoop’s new Emirati business wasn’t the first of its kind for one of its proprietors, Ronnie Insaz, who traded with Dubai as a young businessman in his native Iran, from which he arrived in Israel as a young man.

A couple of months after the Abraham Accords were signed, reports of a Hebrew-language and Israeli-culture institute opening in the UAE began making rounds. Called the Educational Hebrew Institute, the school aims to teach local business people eager to begin interacting with Israelis in Israeli-style.

In April, a plethora of Israeli top brass—a former Mossad chief, retired army generals and leading CEOs—were invited to speak at the Cybertech Global conference in Dubai. The conference covered trends, challenges and solutions in the world of cyber, and the Israeli participants’ attendance highlighted the deepening ties between the two countries.

In a first agreement of its kind, Israel’s ZAKA Search and Rescue organization and organizers of the Dubai International Humanitarian Aid & Development Conference & Exhibition (DIHAD) signed an MoU that supports future collaborations in response to international crises and disasters, to be distributed regardless of color, race, gender, religion or political opinions.

Joint Israel-UAE water research institute is on the way

Earlier this summer, representatives from Israeli air-to-water company Watergen, Tel Aviv University and the Emirati Baynunah company met to sign on the establishment of a joint water research institute in the UAE. The institute is set to tackle issues of drinking water and water treatment in the arid region, as well as enable student and faculty exchanges.

Still with Watergen, the Khaleej Times recently reported that the Israeli water-from-air generator company now has 15 medium-sized machines dotted around beaches and parks Abu Dhabi as part of a pilot program. It apparently proved successful—some 700 more machines have reportedly been ordered, the large majority of them for home use.

Israel, UAE give wing to preservation of rare desert bird

A major beneficiary of the Abraham Accords has been a little bird called the houbara bustard. An endangered species that resides both in Israel and the UAE, it is now the subject of a joint research project between the Israel Nature and Parks Authority and Abu Dhabi’s International Fund for Houbara Conservation.

Israelis and Emiratis to develop COVID-19 stem-cell therapy together

Immediately after the Abraham Accords were announced, the Haifa-based regenerative medicine company Pluristem Therapeutics signed a non-binding MoU with the Abu Dhabi Stem Cells Center to advance cell therapies for diseases including COVID-19. Almost a year later, the company made headlines again when its CEO sent employees a touching message of hope amid the violence erupting throughout Israel.

In what can only be described as a fantastic Middle Eastern twist, Dubai reportedly chose none other than an Israeli drone company to provide security for the World Expo it is to host this fall. Airobotics’ drone-in-a-box solution reportedly will aid local police in securing the international event and shorten emergency response time, as well as reduce the need for traditional security personnel.

In December, Jerusalem’s Heritage Center for Middle East and North African Jewry and Dubai’s Crossroads of Civilizations Museum signed an MoU in which they committed to highlight positive past relationships between Jews and Muslims and preserve and share the culture, traditions and history of the two people in the region.

Ice hockey, rugby, baseball and cycling—these were all fields which Israelis and Emiratis shared for the first time this year as Israeli sportspeople traveled to the UAE to compete against their newly friendly neighbors. The baseball games were particularly heartwarming, featuring both nations’ Little Leagues.

Israel’s offshore Tamar natural gas field got new owners this year when local drilling giant Delek sold its shares in the site—amounting to 22 percent—to Abu Dhabi’s Mubadala Petroleum for $1.1 billion in the biggest commercial deal to take place between the two countries to date. In a region marked by war and strife over oil it’s certainly refreshing to see a cleaner, more collaborative future.

The National Library of Israel and the National Archives of the United Arab Emirates signed an MoU covering an initial three-year period in which the two institutions will collaborate in digitization, knowledge-sharing and cultural exchanges, including study tours, conferences and trainings.

The Abba Eban Institute for International Diplomacy at the IDC Herzliya and the Derasat Institute-The Bahrain Center for Strategic, International and Energy Studies signed an MoU this summer to collaborate on the fields of regional security and multilateral relations in the Middle East. The two institutions plan on addressing these issues via annual meetings, joint research projects, a fellowship exchange program and joint seminars, conferences and workshops.

Aleph Farms is an Israeli company that grows steaks directly from non-genetically modified animal cells. It has quite a few achievements under its belt, such as developing the world’s first cultivated beefsteak and the first cultivated steak grown in outer space. This year it marked another achievement as the first Israel-based partner of DisruptAD, the venture capital platform of Abu Dhabi’s sovereign fund ADQ, which led Aleph’s $105 million Series B funding round.

This summer, top brass from world-famous Israeli hospital Sheba Medical Center flew to Abu Dhabi, where they signed an MoU allowing for the formation of a cooperation framework focused on research and development in telemedicine and the use of artificial intelligence in medicine, as well as the exchange of knowledge and best medical practices.

MediWound became the first Israeli biotech company to form a drug commercialization partnership with an Emirati corporation when it signed a distribution agreement with the Ghassan Aboud Group. GAG will have exclusive rights to market NexoBrid, a burn treatment enzyme gel derived from pineapple, across the United Arab Emirates, subject to regulatory approval.

Israeli clean-tech engine startup to set up in UAE

Aquarius Engines, an Israeli startup that’s developed a lightweight linear engine based solely on hydrogen gas, signed an MoU with British multinational Kampac International (KIP) to form a joint company that will produce automotive products based on Aquarius technology in the UAE. The joint company will be called Middle East Aquarius Automotive.KIP will invest up to $1.2 billion in establishing the manufacturing facility in the UAE, where it has an energy division.

Shortly after the Abraham Accords were signed, an agreement was made between the Israel Film Fund and the Abu Dhabi Film Commission to promote tolerance through the medium of film and television production. The agreement called for the establishment of joint training and development programs for Emirati and Israeli filmmakers, in partnership with Jerusalem’s Sam Spiegel Film & Television School.

The first joint product to be launched in the UAE between an Israeli technology company and an Emirati company was IoT healthcare solution HBKiCare, a home care kit enabling continuous monitoring of ECG, temperature, pulse, blood oxygen and blood pressure. The deal was carried out by SURE Universal of Ramat Gan and the UAE’s Hamad Bin Khalifa (HBK) Department of Projects, a UAE royal family economic and social growth initiative.

This summer, Israeli TV channel i24News reached a partnership agreement with the Dubai-based Motivate Media Group to collaborate across a range of media. According to reports, cooperation will focus on print, broadcast and digital media, as well as on events.

Last fall, reports surfaced saying that Hadassah-Hebrew University Medical Center’s former director general, Prof. Zeev Rotstein, was in talks with Emirati medical organizations regarding the possible establishment of a branch of the prestigious hospital in Dubai. According to the reports, the Emiratis even generously offered to relocate 1,000 doctors and nurses and their families. Perhaps the parties are waiting for the anniversary of the Abraham Accords to announce confirmation of this plan.

Caption: Tel Aviv City Hall lights up with the word "Peace" following the signing of the Abraham Accords, Sept. 15, 2020.
Photo by Miriam Alster/Flash90.