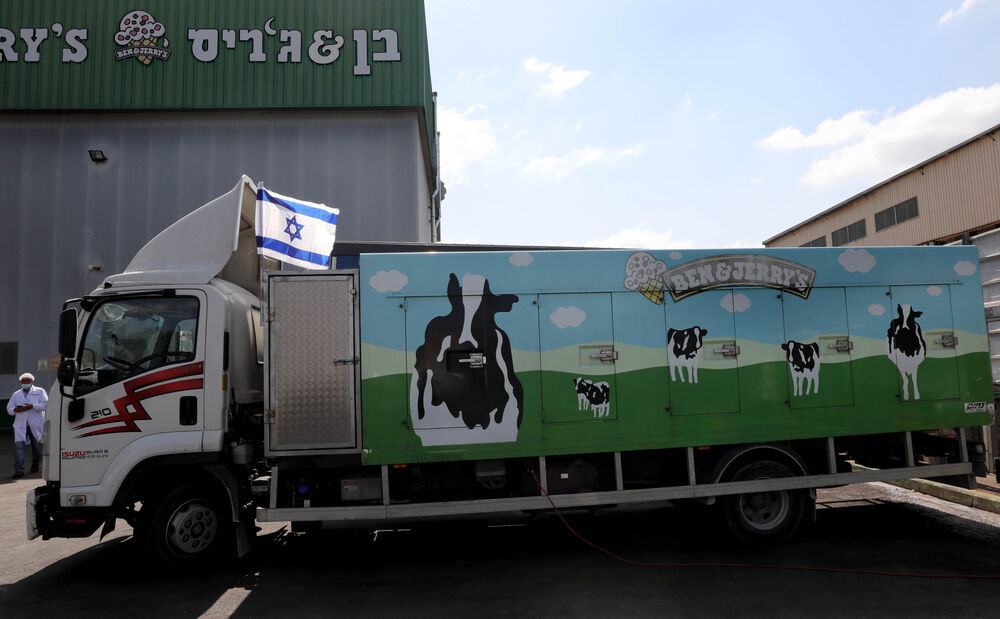 How did two “proud Jews” come to punish Arabs by denying them ice-cream to protest what they dislike about the Jewish state’s policy?

Ninety-nine years since the 50 countries constituting the League of Nations decided to reconstitute the Jewish national home in Palestine—defining that territory as all the land west of the Jordan River (although the local Arabs saw themselves at the time as Southern Syrians), recognizing the Jewish people’s historic connection to the country and encouraging “close settlement by Jews on the land, including State lands and waste lands”—Israel, the Jewish state as recommended by the United Nations in 1947, is under attack by “proud Jews.” That’s what Ben Cohen and Jerry Greenfield, the founders of Ben & Jerry’s ice-cream, defined themselves as in their July 29 op-ed in The New York Times.

Cohen and Greenfield sought to defend their former company’s decision to make “a contrast between the democratic territory of Israel and the territories Israel occupies.” What is in doubt, I would suggest, is that they understand what their independent board decided.

On July 19, Ben & Jerry’s announced that the company’s ice-cream products will not be “sold in Occupied Palestinian Territory (OPT).”

In current parlance, “OPT” is used to designate the geographic area that is usually employed in U.N. resolutions, anti-Zionist propaganda and ill-informed commentators as short for the “West Bank,” “Gaza” and “East Jerusalem.” Since 1993, the so-called “West Bank” has been divided into Areas A, B and C, with A and B administered by the Palestinian Authority.

The decision of Ben & Jerry’s did not specify the term “settlements.” In other words, Ben & Jerry’s is either boycotting all the Arab population of that territory, which would include Ramallah as well as Shiloh and Bethlehem, as well as Efrat. All the Jews therein (including Jerusalem) are specifically targeted, including several who had lived in that area even before 1948 when it was known as Judea and Samaria.

How did, then, “proud Jews” come to punish Arabs by denying them ice-cream to protest what they dislike about the Jewish state’s policy? In addition, I am puzzled by the phrase “democratic territory of Israel.”

Any historical overview of the last century and a half will highlight the fact that the most determined, the most persistent, the most tenacious and the most fanatically dangerous opponents to the Jewish national idea and its political expression, Zionism, originates from Jews.

Whether they were Reform Rabbis, Chassidic Rebbes, assimilationists, apostates, ethical culturalists, Bundists, Communists, Yiddishists or what-not, they were always (besides being in error) on the one hand, in the minority while on the other, able to garner public attention far in quantity than their numbers.

The British Montagues and Sebags almost sabotaged the Balfour Declaration. There were 299 American Reform Rabbis who sought to dissuade Woodrow Wilson from supporting the Zionists at the upcoming San Remo Conference that would confirm the Jewish National Home mandate proposal. Ultra-Orthodox rabbis kept their flocks from immigrating to the Land of Israel, dooming them. Bundists broke up Zionist rallies across Poland. The American Council for Judaism sought to undermine American support for U.N.-promoted statehood.

Israel’s establishment dampened their enthusiasm a bit, but the victory of 1967 reinvigorated this anti-Zionist/pro-Palestinianism malaise. We witnessed Breira and then J Street, Jewish Voice for Peace, IfNotNow and a slew of other groups promoting anti-Zionism.

Now, the idea of a somehow “illegal occupation” (it isn’t) facilitated a misdirected concentration that allowed all of the above to present themselves as “moral” in their destructive zealousness. But this posturing essentially is immoral even more than it is incorrect and illogical.

As Cohen and Greenfield assert, it is “possible to support Israel and oppose some of its policies.” But by supporting a prohibition of selling a dessert item, as trivial as that may appear, they are taking action and not only opposing a policy. They are not only voicing an opinion but supporting a narrative that is wrong and false, and lending aid and comfort to a terrorist regime that seeks to kill Jews. They may claim to be “men of principle,” but the truth is that they are unprincipled Jews.

It wasn’t Zionists or Israel that thwarted and denied the Arabs of Mandate Palestine (again, what they had thought of as Southern Syria to be reunited) in 1937 or 1947. It wasn’t Zionists or Israel who refused them additional options to gain a state in 1967, 1968, 1977-79 or in 2009-10. The Arabs were at fault. They could have ended their “occupation.” Israel has sought time and again to negotiate for peace.

In leaving Gaza in 2005, Israel not only yielded up territory but in doing so—and with the subsequent ongoing violence—proved my point. It’s one that Cohen and Greenfield avoid, which is that supporting the cause of “Free Palestine (‘From the River to the Sea’)” is a policy of Jewish eliminationalism.

We know this truth to be self-evident: That a state is not the Arab goal. Rather, it is denying one for the Jews. The Ben & Jerry’s board, headed by vicious anti-Zionists, sought to include all of Israel in their boycott. Their act cannot and should not be seen “as advancing the concepts of justice and human rights, core tenets of Judaism,” as they claim. And, indeed, it is a rejection of Israel.

It can be argued that it is also anti-Semitic—or not. But for that, Jews are required to be present. Ben & Jerry’s actions potentially contribute to the lack of the same. And that, Messrs. Cohen and Greenfield, is not being progressive.

Yisrael Medad is an American-born journalist and political commentator.

Caption: A Ben Jerry's ice-cream delivery truck is seen at their factory in Be'er Tuvia near the Israeli southern city of Kiryat Malakhi on July 21, 2021.
Credit: Gil Cohen Magen/Shutterstock.