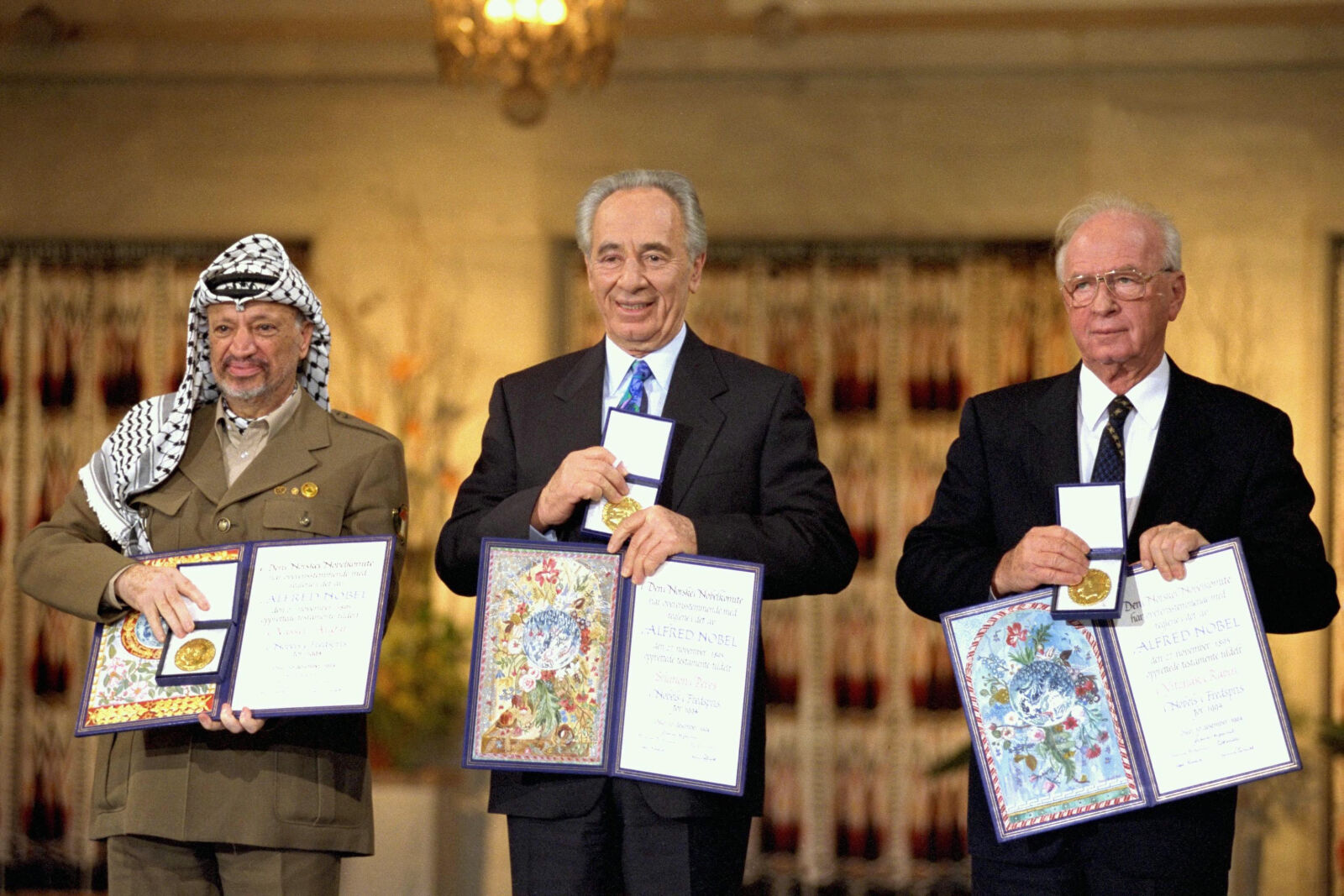 If anyone was still wondering whether sexual assault trumps Palestinian statehood or the other way around, this week provided a pretty clear answer.

Every year at this time, Israel stops to mourn and memorialize Yitzhak Rabin, the prime minister who was assassinated on Nov. 4, 1995 at a rally celebrating the signing of the Oslo Accords.

Whatever one thought of the late premier prior to after his murder at the hands of “right-wing extremist,” Yigal Amir instantly turned him into the country’s most hallowed figure—one with a legacy named after him. National trauma will do that, especially under the circumstances at the time.

The so-called “polarization” that Prime Minister Naftali Bennett bemoans and vows to rectify was on full display all those decades ago, just as it has been since the establishment of the state. Then, as now, opposition leader Benjamin Netanyahu was called the culprit by the self-anointed peace camp.

It was allegedly his and his supporters’ ostensible incitement against Rabin and Oslo that led Amir to gun him down. That the accords would prove to be the disaster of which Netanyahu had warned—mass Israeli casualties at hands of Israel’s Palestinian “peace partners,” ruled by PLO chief Yasser Arafat—is absent from the discussion.

To everyone’s great surprise, Netanyahu’s Likud Party emerged victorious in the Knesset elections that took place a mere seven months after the assassination. Though the entire nation was still reeling from the tragedy and the left demanded that the right engage in “soul-searching,” more voters opposed the Oslo Accords than supported them.

Netanyahu defeated Shimon Peres, who had assumed the role of prime minister upon Rabin’s death. Ironically, Peres and Rabin had been personal and political archrivals for the bulk of their lives. They had managed, somehow, to bury the hatchet in plenty of time to jointly sign the first Oslo agreement with Arafat in 1993 on the White House lawn. The three subsequently shared the Nobel Peace Prize for the charade.

Israelis quipped that it wasn’t clear which hand was harder for Rabin to shake during that period: Arafat’s or Peres’s. Nobody doubted, however, that Peres found it easier to make nice with the terror-master than with his nemesis-turned-frenemy.

But then, unlike Rabin, Peres was a devout land-for-peacenik who kept insisting that the New Middle East was busting out all over. No amount of spilled Jewish blood put a dent in his fantasy.

Nor did Peres’s loyalists ever forget that Rabin, while defense minister in 1988, reportedly ordered Israeli soldiers to “break the arms and legs” of Palestinian inciters. Rabin denied the allegation, but it stuck nevertheless.

Though Peres would not see the prime minister’s seat again, he assumed other roles, ultimately becoming president. His land-for-peace visions—some would say delusions—were his calling card at home and abroad.

Just as Rabin gained posthumous saint-like status, Peres, while alive, cultivated his own until his death in 2016 at the age of 93. It was an easy feat since laying claim to peace is a safe bet where global honor and fundraising are concerned.

It thus came as a huge shock when former Labor Knesset member and former consul general to New York Colette Avital revealed that Peres had sexually assaulted her in the 1980s. In a “tell-all” interview with the left-wing Israeli daily Haaretz, Avital recounted two incidents that left her with “difficult memories”: one during her three-year diplomatic stint in Paris and the second upon her return to Israel a few years later.

According to Avital, the first time that her mentor harassed her was at the hotel in France where he was staying during a visit. She said that when she arrived for their breakfast meeting, she was told by his aides that, “due to security reasons,” the tête-à-tête would have to take place in his room.

She claimed that he greeted her in his pajamas and proceeded to shove her towards the bed—whereupon she fended him off and fled.

The other instance, she said, took place in 1984, when Peres was prime minister and she was finishing up in Paris. According to her account, Peres summoned her to his office to discuss her future in his administration.

When they were done talking and she was preparing to leave, “He pressed me against the door suddenly and tried to kiss me,” at which point she pushed him away and ran, “legs shaking.”

“It repulsed me,” she said.

This didn’t prevent her from spending many years working for and with Peres, of course. But, she explained, in the aftermath of the above incident, she avoided encountering him for a very long while.

It took the #MeToo girls a few days to catch their breath. On the one hand, a sister in their camp had come forward with a story that normally would elicit a communal outcry. On the other, Peres is a sacred cow, and his baby, the Jaffa-based Peres Center for Peace and Innovation, is a cash one.

Avital gave a few reasons for her having spilled these particular beans now, after all these decades. One was that she felt that she should serve as an example to all the young women who no longer tolerate the kind of sexual harassment that females of her generation had taken for granted.

Another was to dispel, once and for all, the rumor that has swirled around her career since the beginning: that she was Peres’s mistress and slept her way to the top. The gossip wasn’t even whispered; it was something that every Israeli of a certain age had heard and assumed to be true.

Meanwhile, she also insisted that she had informed certain advisers of Peres’s when the harassment took place. One of these, peace activist and former minister Yossi Beilin, protested this week having no memory of the conversation.

Another, radical Haaretz columnist Gideon Levy, at least acknowledged having been aware that many women made sure not to be with Peres behind closed doors. But he also stated that he hadn’t actually witnessed any of the behavior, quipping that “Peres never sexually harassed me personally.”

Then there’s former Meretz MK Anat Maor, who wrote to Avital that she “and many others are hugely disappointed by your revelation,” which was disrespectful to Peres, especially when juxtaposed with “victims of severe harassment … Isn’t it obvious to you [that it] will be used to damage the peace process and the Oslo Accords?”

Never mind that only peace actually taking root right now is based on the Abraham Accords, not Oslo. More importantly, one shudders to imagine the fate of any right-winger would dare, like Levy, to make light of a so-called “predator,” or like Maor, to put a man’s policies ahead of his appetites and sense of macho entitlement.

Most of the left knows this and has been scrambling to do a bit of damage control.

As a result, after a second woman revealed that she’d been sexually assaulted by Peres—and members of the elite grudgingly admitted that his actions on this score were common knowledge all along—the #MeToo ladies have had no choice but to make their voices heard, even if in sotto voce.

Transportation Minister Merav Michaeli, for instance, told a gathering of her Labor faction, “I always believe the complainants and I believe Collette Avital, too.”

Not exactly what you’d call “fightin’ words” from one of the country’s leading loud feminists. But then, even Avital insisted that Peres’s “greatness” shouldn’t be canceled out, all because of this other matter. You know, the one that she herself unleashed.

Luckily for her and the rest of Israel’s best and brightest, the Peres Pandora’s Box was upstaged by the Rabin-assassination anniversary, enabling them to speak in platitudes about peace vs. polarization, and focus on Netanyahu as the main villain in their false narrative.

If anyone was still wondering about the outcome of a sparring match between two sides of “woke”—whether sexual assault trumps Palestinian statehood or the other way around—this week provided a pretty clear answer.

Ruthie Blum is an Israel-based journalist and author of “To Hell in a Handbasket: Carter, Obama, and the ‘Arab Spring.’ ”