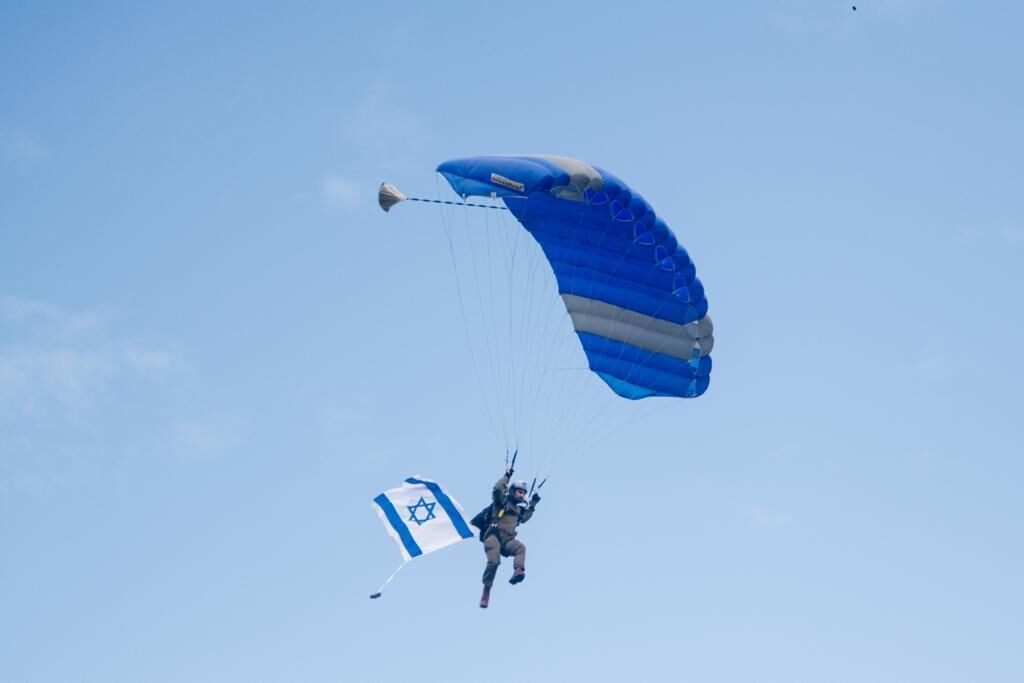 The Deputy Commander of the Paratroopers Brigade, Col. (Res.) Oran Bersano, tells about the deeply moving experience of taking part in a commemorative paratrooper expedition in Slovenia.

Israeli paratroopers have described being deeply moved last week by their experience in a commemorative expedition in Slovenia, held to honor the memory of Hannah Senesh (Szenes) and other Jewish paratroopers who parachuted into the same area of Europe during World War II.

“When you jump from the plane, you look right and left, and it takes on a new significance,” the Deputy Commander of the Paratroopers Brigade, Col. (Res.) Oran Bersano, told JNS in recent days.

“Hannah Senesh did this at night, in secret, so that no one would discover her here. Today, Israeli soldiers are parachuting in broad daylight with the media waiting for us on the ground. This is moving,” said Bersano. “The Lightning of the Heavens Expedition” was an international joint parachute jump and memorial event that took place in Slovenia, Croatia, and Hungary, which marked the 100th anniversary of the birth of Senesh, the first Jewish female paratrooper.

In British Mandatory Palestine at the time, Senesh, who is also known for the emotive and lasting poetry she wrote of the area, enlisted in the British Army in 1943 and went on to become one of 37 volunteers from the Yishuv to parachute into Nazi-occupied Europe in order to help their Jewish brethren. She parachuted into Yugoslavia in March 1944. In June 1944, she was caught by Hungarian forces trying to cross the border into Hungary, arrested and brutally tortured, but she refused to disclose sensitive radio codes. She was executed by firing squad in November 1944 at the age of 23.

Bersano, whose 94-year-old grandmother is a Holocaust survivor from Hungary, described the feeling of coming full circle by taking part in the jump. “My grandmother’s brother was killed in the 1948 War of Independence, after immigrating by boat in 1944. Before that, he fought in the Hungary-Romanian area against the Nazis as a partisan. So this is a truly significant closing of the circle for me personally,” he added.

Bersano, a father of four who serves 100 days in the Israeli Defense Forces’ reserves each year, trained with the German military in 2019—an experience he also found brimming with historical and contemporary purpose.

The expedition also included walking through the forests that the Jewish paratroopers wondered through. “As I speak to you, there is a pastoral river nearby. Not long ago, Jews were thrown in the river in the 1940s. Now, Israeli soldiers are here in uniform. The significance of IDF paratroopers coming to any place in the world is that we are not a nation that does not forget a thing. And that no matter who is in distress, we will come to their aid. This is the Israeli DNA,” said Bersano.

The re-enactment of the historical parachute jump was performed at the Cerklje airport in Slovenia, close to the site of the original jump in 1944.

Eight IDF paratroopers jumped from a height of 12,000 feet, the IDF said, and this stage included paratroopers from four other countries: Hungary, Slovenia, Croatia and the United Kingdom.

Once on the ground, participants followed in the footsteps of Senesh and the additional Jewish paratroopers, walking through partisan forests near the towns of Draga and Šmit.

On the last day of the expedition, participants met with the local Jewish community and visited Senesh’s tombstone in Kozma, Hungary.

“This is not just another visit to a memorial site and see where Jews suffered. It’s about soldiers stepping here to commemorate,” said Bersano.

‘Writing a new chapter in history’

The joint participation of British, Slovenian and Croatian forces in the event highlights the fact that in the modern era is also profound, the deputy commander added.

Soldiers from the different countries exchanged flags and berets.

“We learn from history to get to a different place. This cooperation between them and us is shoulder to shoulder,” said Bersano. “We walked together and unveiled Senesh’s memorial site. We played the national anthems of both countries [Israel and Slovenia]. This is a different message to the world—one of cooperation, peace and of writing a new chapter in history.”

The last known time that the IDF use parachuting in live operations was in the Sinai Campaign of 1956. Since then, paratroopers have taken key parts in IDF battles, but on the ground.

Bersano explained that safeguarding the ability to drop troops into an arena from the air remains important because it is impossible to know when it might be needed in a future battlefield against any present or future enemy.

“We have to safeguard this ability,” he said. “If it was done in the 1940s, I have to assume it might be significant for operations in the future as well.”

Caption: An Israeli paratrooper holding flying the flag of Israel while parachuting over Slovenia as part of commemoration of Jewish World War II paratroopers.
Credit: IDF.