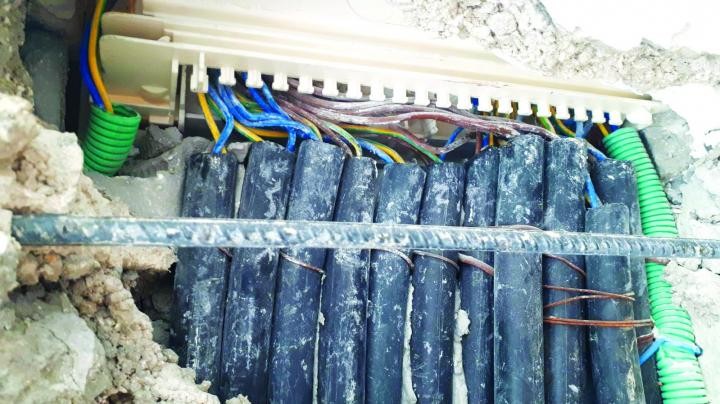 Renovating a home involves taking an existing structure and making changes to it. This necessitates undoing someone else’s work—that of the original kablan, the DIY homeowner, or a former renovator. What happens when you encounter sub-standard or sub-sub-standard work in the process?

Israel is a highly regulated society.  The building industry is no different. Teken in the building industry refers to the standards that the trades must adhere to when performing their work, aka, code-compliance.  There are codes for the structure of the house--size of steel and strength of concrete, for example, and there are codes for the electrical, plumbing, and gas systems that are contained within a house. Materials installed in a house must also adhere to and be approved by the Standards Institution of Israel, Machon Ha’Tkanim HaYisraeli.

Some of the reasons these standards are necessary are to maintain public health, protect the environment, and maintain public safety. The teken is also meant to ensure safety many years in the future. I will describe this with a few electrical examples.

Let’s say I have a light switch located on my living room wall that controls an overhead light. I want to add an additional light switch, which will control a wall sconce, 50 cm higher up from the switch and 120 cm to the left. I will need to chisel in the wall from the light switch to the desired sconce location. The rule we learned in grade nine algebra—that the shortest distance between two points is a straight line— would dictate my path to be a diagonal, from the switch to the sconce. However, if I would chisel the wall, run new wires, patch the wall and paint, I could be putting someone at risk in the future. What if five or seven years down the road the new homeowner decides to hang a picture? He pulls out his handy-dandy drill, or hires a handyman to make a hole for a dibble, and inadvertently drills straight through an electrical wire and out go the lights! Teken requires electrical lines be chiseled in a vertical or horizontalpath. This ensures safety for future trades. They know to anticipate wires being run in these directions and can take precautionary measures when drilling. They do NOT expect wires to be run in a diagonal path.

Another example involves the color of the plastic coating, or sheathing, around the copper wire. Teken, or convention, is that brown is used for line, blue for neutral and yellow/green for ground. The electrons buzzing through the copper wire couldn’t give a hoot as to the color of the sheathing, but an electrician working several years down the road certainly does. He assumes the previous electrician wired according to teken. My electrician and I have encountered numerous cases where this convention was not followed; it leads to much longer troubleshooting in the future (which is usually costlier to the client) and electrical shocks. The electrician does not expect the ground wire to be carrying 240 Volts, but if it was wired incorrectly by an incompetent contractor, his life could be at risk.

The attached picture shows the back of an electrical panel AFTER the wall behind it was opened up to reveal the wires and the pipes. Do you notice what is wrong here? One advantage of Israeli wiring, in contrast to North American wiring, is the use of pipes, or tzinorot, the black tubes in the picture. Pipes are run between the electric panel and devices (outlets and switches). Then the appropriately colored wires are pulled between the points. The advantage of this system is that if new wires need to be pulled in the future, the wall doesn’t need to be chiseled. For example, if you wanted to install a ceiling fan in a bedroom and individually control the light and the fan with separate switches, you would need to pull one additional wire through the existing pipe and add a second switch. In the attached picture NONE of the pipes actually made it into the electric panel. This picture was taken in a home that I recently renovated where extensive electrical changes were made; the kitchen turned into a bedroom, and the study turned into the kitchen. We needed to change a lot of the wiring, and what should have been a simple exercise of pulling and exchanging wires was getting us nowhere--we simply couldn’t fish any new wires through. After we opened up the back of the panel, everything became clear. The pipes were 2-7 cm short of the panel, and plaster surrounded the wires, making it impossible for anything to budge.

All the examples I have given were for electrical work, but unfortunately, I have encountered sub-standard work in plumbing, waterproofing, tiling, and other fields as well. It certainly makes renovating more challenging.

Sloppy work and not adhering to teken and building conventions can cause many problems down the road. It makes troubleshooting more difficult and can cause harm to person and property. Make sure you hire a reputable contractor who will do it right the first time. It might cost you more, but you’ll have peace of mind and safe wiring for many years to come.

Baruch  Tenenbaum, owner  of Quality Home Improvements, is  a professional local contractor, providing high-end  jobs with proper Anglo service. He can be reached at 050-674-1976.