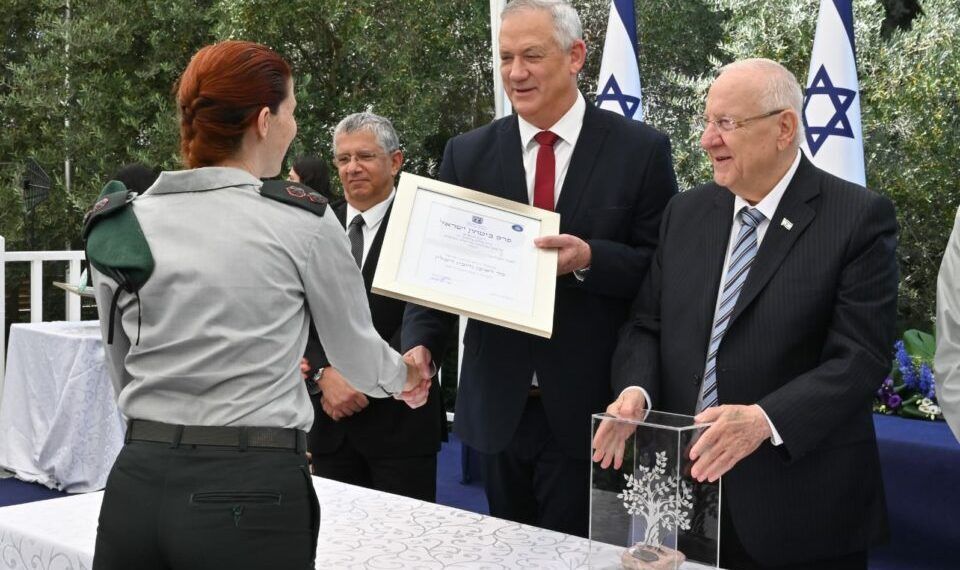 The ceremony was Rivlin’s last, as he is set to leave office next week. IDF Chief of Staff Lt. Gen. Aviv Kohavi and Defense Ministry Director-General Amir Eshel were also in attendance.

The prize, named after Haganah commander Eliyahu Golomb, is awarded for projects and actions that made a special contribution to the defense of the nation and protecting its advantages on the battlefield, both in technology and operations.

The ceremony, held at the President’s Residence in Jerusalem, honored projects by the Mossad intelligence agency, Israel Security Agency (Shin Bet), the IDF, the Defense Ministry’s Administration for the Development of Weapons and Technological Infrastructure (MAFAT) and Israeli defense contractors.

The Military Intelligence Directorate’s Unit 8200 was honored for developing “unique, groundbreaking and exceptional intelligence accessibility” for the intelligence community, in a project that led to a “significant leap in capabilities,” the Defense Ministry said in a statement.

The IDF’s C4I Corps, ISA, the Defense Ministry, National Cyber Division, the Mossad and the Military Intelligence Directorate were jointly honored for a cyber defense project that was “designed to provide cyber defense while developing customized technological capabilities against the threat of cyberattacks.”

A third project, of MAFAT, the Israeli Air Force Rafael Advanced Defense Systems and Israel Aerospace Industries, was honored for providing the military with “innovative solutions.”

The fourth prize went to another project of MAFAT’s, together with Military Intelligence Unit 81, the Mossad, the IAF, Rafael, and IAI. The project “provided the IDF with professional, unique and significant capabilities.”

Rivlin lauded the winners and expressed his “appreciation for the sophisticated systems and developments” by those whose activity “is conducted, naturally, away from the public eye.”

“The people behind the system are the foundation and the main thing. Without it, even the most innovative technological development cannot protect us,” said Rivlin.

The public, he said, “May not know how much they owe to the award winners for their work, [but] believe me—they feel it.”

Gantz said the prizes showcased the close cooperation between the bodies comprising the defense establishment.

“We saw the benefits of these [defense] systems during ‘Operation Guardian of the Walls’—the precision and unprecedented intelligence employed during an operation that minimized harm to uninvolved civilians when comparing to the extent of the aerial operations. The targeting of terrorists was effective and powerful,” he said.

“These days, the entire Middle East is on the verge of an arms race, particularly if Iran continues to push towards the nuclear threshold. We remain vigilant vis-à-vis these threats. Our defense systems, most of which were developed in Israel, are deployed and our intelligence works at all times to identify threats and targets.”

Israel, Gantz warned, “is well aware of what is happening in the region and our policy is clear: we will not tolerate any violation of Israeli sovereignty. Not by incendiary balloons or rockets, or by any other means pursued by Iran and its proxies. We will respond forcibly when and how we see fit.

“We operate constantly, by a variety of means and in close coordination with our allies, especially the United States. We will cooperate with anyone who wants to promote stability and peace in the region.”