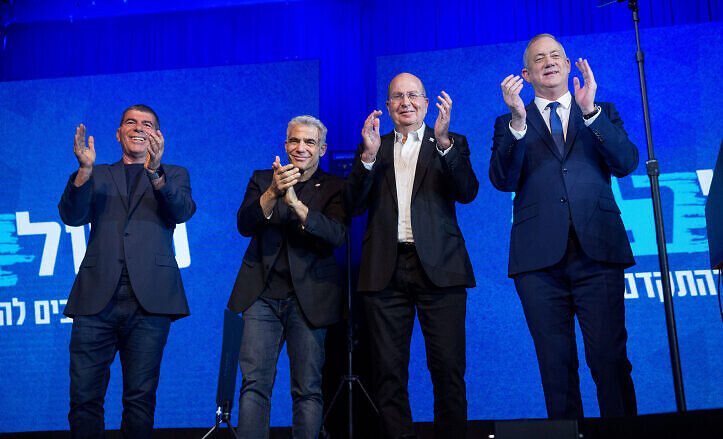 Defense Minister Benny Gantz’s vow to vote to disperse the Knesset more him giving in to his party than a true show of force; if the vote goes through Gantz is likely finished politically.

One look at Defense Minister Benny Gantz and it’s hard not to see this is a man stewing in his own juices. Ultimatums violated, promises tossed aside for no good reason and a long trail of disappointed voters in its wake, the Blue and White Party head now faces the most difficult dilemma of his political life.

This situation is, of course, his own doing. He can either fold on the budget issue, give Netanyahu a later date for calling elections before the rotation deal goes into effect and put an end to any remaining trace of dignity he might have—and his political career along with it, most likely—or he can stand firm and walk unflinchingly toward an election campaign that will also spell the end of his political career.

Never has a man dug himself a hole so deep.

Netanyahu does not intend to enter into negotiations over a bill to disperse the Knesset to be proposed on Wednesday. Why would he? He wants to keep his options for calling an election open, and if that doesn’t happen at a later date as he desires, it might as well happen now as far as he is concerned. Unlike Gantz, the polls seem to be smiling on Netanyahu, and even his trial on corruption charges, with the potential to derail his campaign, is no longer guaranteed to begin in February. It might only be after the election.

The calm, moderate, unifying tone Netanyahu has adopted of late seems to be driving Gantz out of his mind, with the defense minister appearing threatening and incendiary, and as trying to force a confrontation that refuses to come.

Gantz’s announcement he plans to vote on Wednesday in favor of legislation aimed at dispersing the Knesset is not exactly surprising. Nor does it tell us much about what’s actually going to happen.

In an attempt to please his nonexistent base, Gantz has ordered the establishment of a commission of inquiry into what is known as the “Submarine Affair,” which involves allegations of bribery surrounding a state purchase of submarines from a German firm, and is set to propose a series of laws on equality and LGBT rights in the Knesset.

It may be that support for dispersing the Knesset in the bill’s preliminary reading will be a prelude to his capitulation on the budget later on—and we haven’t even gotten to the big guns to be drawn in the battle on term limits and legislation to prevent a sitting prime minister from serving under indictment.

Everyone agrees that if Gantz had gone with his gut, he would have informed Netanyahu a long time ago that a compromise could be reached on budget. But now some of his allies are down with him in the hole he has dug for himself, and they’re keeping him from coming up for air.

In a faction meeting on Monday, Gantz encountered staunch opposition from some in his party to the notion of any compromise or dialogue that leads to something other than an election. Gantz was forced to go with the flow and place his future, however unwillingly, in their hands. The attacks by Foreign Minister Gabi Ashkenazi, Justice Minister Avi Nissenkorn and Blue and White MKs Miki Haimovich and Asaf Zamir didn’t leave him much choice.

In other words, his vow to vote in favor of dispersing the Knesset is more Gantz giving in to his party than a show of force. If Blue and White does vote to disperse the Knesset, Gantz will have dug himself a hole so deep he may never see daylight again.

It seems that just like the Shinui and Kadima parties before it, Blue and White’s number is up. The greater the expectations, it seems, the greater the disappointment. Infighting doomed those now-forgotten parties, and now Blue and White is confidently marching down the exact same path.