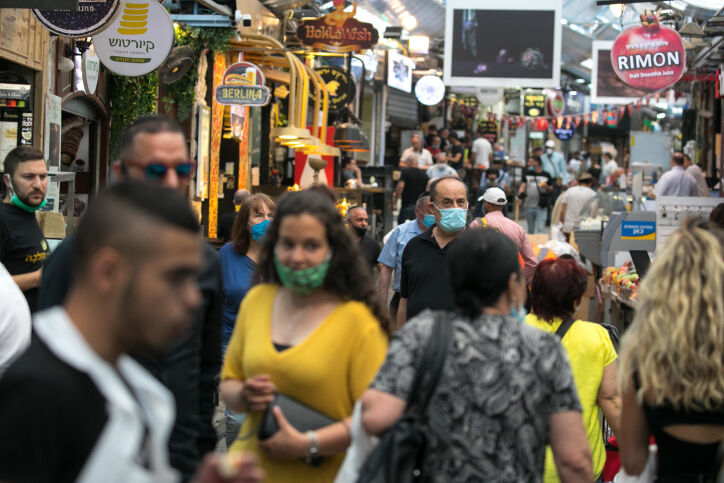 The American left should stop projecting their views about “white supremacy” onto the Jewish state, most of whose population is “of color.”

With a new school year fast approaching, America is busy debating the merits of promoting and teaching Critical Race Theory (CRT) in the classroom. Many advocates of CRT are also trying to paint Israel as a white, racist nation that treats its minorities harshly.

In a 2015 panel discussion on BDS and “resistance” at Portland State University, Surasky—who now serves as communications director for the Othering & Belonging Institute—said: “Settler colonialism and white supremacy is the right, holistic frame with which to understand Israel and Palestine.”

She wasn’t alone in her pushing of this false narrative, which, has become commonplace today among CRT enthusiasts today.

Until the end of the 19th century, the majority of Israel’s Jewish population was Arabic-speaking. These were indigenous Jews, whose families had never left the land, or those who returned to it from Arab countries—i.e. Jews of color.

While Israel saw a large influx of eastern European (Ashkenazi) Jews in the early part of the 20th century, by 1960, half of the country’s Jewish population were Sephardic, hailing from North Africa, Iraq, Yemen, Syria and Iran. The latest statistics show that today, most Israelis are the latter.

Furthermore, Jews in those Muslim-majority countries were brutalized and forced to leave. The heritage of Jews in Iraq, for example, dated back to the destruction of the First Temple in 586 BCE. In June 1941, Jews in Baghdad were ambushed by an armed Arab mob in a pogrom that came to be called the Farhud, Arabic for “violent dispossession.”

As Israel Kasnett wrote in May, “This paved the way for the dissolution of the 2,600-year-old Jewish community 10 years later. Forced out by fears of a second Farhud and denationalizing legislation that made them stateless refugees, the overwhelming majority of Iraq’s Jewish community immigrated to Israel after 1948.”

Iraq is but one example among many of this treatment of Jews.

In addition to the above, Israel is home to some 180,000 Jews from Ethiopia. While American blacks were kidnapped and brought to the United States on slave ships, Ethiopian Jews were rescued from savagery in Africa by Israel, and transported from danger to safety and freedom.

Another contrast is that Jews of color in Israel tend to be more on the political and religious right, and were largely responsible for former-Prime Minister Benjamin Netanyahu’s repeated electoral victories, while racial minorities in the U.S. align with the left-leaning part of white America, most having voted for President Joe Biden.

Indeed, in one of Israel’s recent elections, right-wing Jews of color were derogatorily referred to as “mezuzah kissers,” while in the last American election, it was white Christians who were accused by the left of “clutching their guns and bibles.”

This is not to say that there hasn’t been racial unrest and tension in Israel over the decades, some violent. The 1959 the Wadi Salib riots in Haifa, sparked by the shooting by a police officer of a Moroccan-Jewish immigrant, come to mind, for instance. But this issue has mostly been overcome, especially with the intermarriage of Ashkenazim and Sephardim, which has blurred the distinction between them.

The story of Israel’s other minority communities is also worth noting. The Jewish state has become home to a number of other faiths, such as the Bahai, based in Haifa-Akko, and the Circassians, whose spokesperson publicly states to visitors that Israel is the best place for a Circassian Muslim. The Druze, as well, are fiercely loyal to the country and proudly serve in the Israel Defense Forces. For the Ahmadis, a Muslim sect that is discriminated against and persecuted in much of the Middle East, Israel is the only place where they can openly practice their faith.

Finally, there are Israel’s Arabic-speaking Muslim and Christian populations whom the American left claims are relentless targets of Jewish discrimination. No doubt there is some room for improvement.

Jerusalem Muslims and Christians have a challenging citizenship status that can create issues for them and their families. Muslim communities also face higher levels of crime than their Jewish counterparts—a problem that’s just beginning to be addressed by the political echelon.

Nevertheless, Israel’s affirmative-action initiative has been so effective that today, many training slots for doctors, nurses and pharmacists are filled by Muslims. Though the percentages fluctuate in different neighborhoods from year to year, in 2015, when Muslim and Christians from eastern Jerusalem were polled as to whether they would prefer to be part of Israel or part of a future Palestinian state, the majority said the former.

Israelis wish Americans well in rebuilding a cohesive society. But Americans should stop projecting their racial history and challenges on Israel. Critical Race Theory simply doesn’t apply to the latter.

Gary Schiff is a resource consultant connecting Israel and the United States.