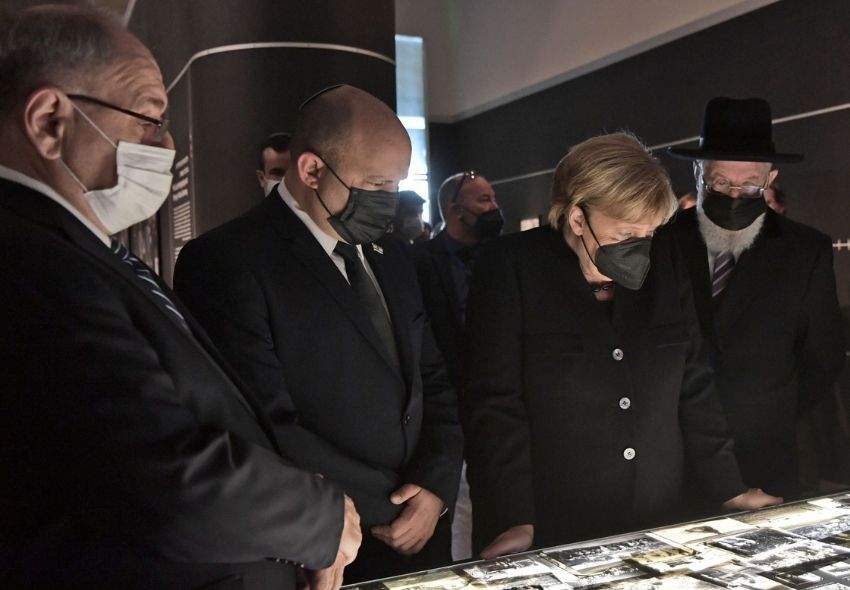 “The crimes against the Jewish people that are documented here are a perpetual reminder of the responsibility we Germans bear, and a warning,” says German Chancellor Angela Merkel.

Merkel visited the “Flashes of Memory: Photography during the Holocaust” exhibition and the Museum of Holocaust Art, according to a statement from Yad Vashem. She later observed the Shoah Legacy Campus currently under construction and viewed objects from Hamburg, her birthplace, which are to be exhibited there.

After the tour, Merkel met with Holocaust survivor Henry Foner, before concluding her visit by participating in a state memorial ceremony in the Hall of Remembrance.

Following the ceremony, the chancellor requested personal time in the Holocaust history museum, according to Yad Vashem.

“Every visit to Yad Vashem touches me at the core every time anew,” she wrote in the official Yad Vashem guest book. “The crimes against the Jewish people that are documented here are a perpetual reminder of the responsibility we Germans bear and a warning: That Jewish life has again found a home in Germany after the crimes against humanity that were the Shoah is an immense expression of trust for which we are grateful. This trust compels us to stand up in determination against anti-Semitism, hatred and violence every day anew. This is an obligation for every federal [German] government.”

In his remarks during the memorial ceremony, Bennett thanked Merkel for her unwavering support of Holocaust remembrance.

“The Hebrew word Shoah, which has also become established around the world and serves to describe the destruction of the Jewish people during World War II, comes from Psalm 63:10, ‘But they seek my soul to make it desolate,’ ” said Bennett.

“The original meaning of the word is ‘desolation.’ The Nazis’ goal was to leave behind them a desolation—the complete erasure of our people. One-third of it was lost, 6 million men, women and children,” he continued.

“But, honored guests, when one leaves Yad Vashem and sees the words of the prophet Zechariah 8:5, ‘And the streets of the city shall be filled with boys and girls playing in its streets,’ one understands the enormity of the disaster, and one also understands the enormity of the miracle: Only a few decades separate the strong, prosperous and optimistic Israel of our days and … the most difficult, darkest and most painful chapter in the annals of our people.”

The Shoah, said Bennett, has many lessons, but the most important was also the simplest: “The place of the Jewish people is on its soil, here in the land of Israel.

At the end of the visit, Dayan presented the chancellor with a “token of remembrance”: a photo album and complete set of Bible illustrations by Belgian artist Carol Deutsch, which she had been shown earlier at the Holocaust Art Museum.