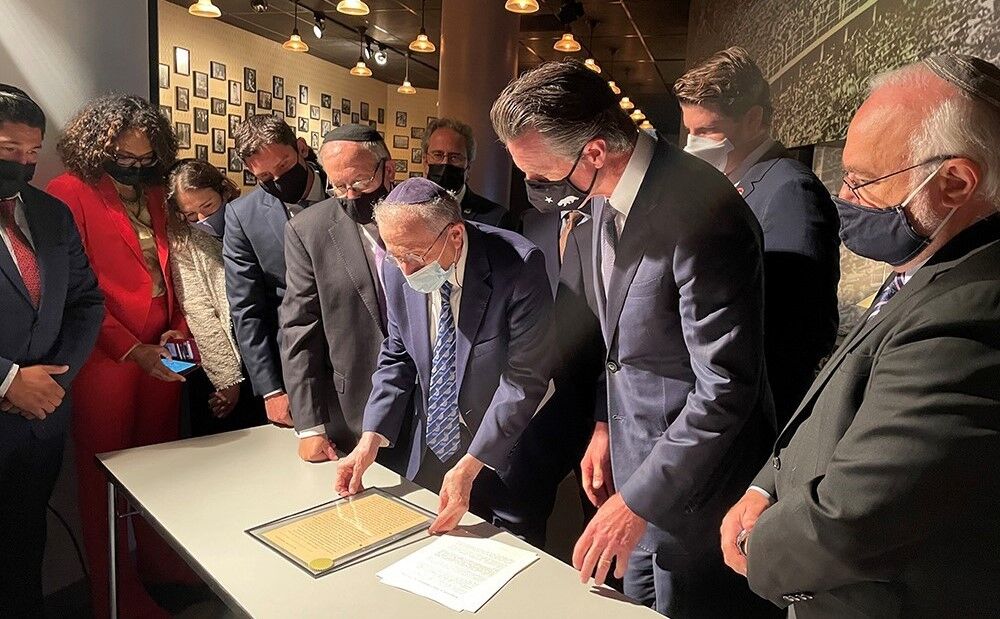 Senate Bill 693 was favorably received in the state legislature and is supported by the Jewish Public Affairs Committee of California.

California Gov. Gavin Newsom announced on Wednesday the creation of the Governor’s Council on Holocaust and Genocide Education aimed to advance education on the Holocaust and other genocides in public schools, as well as support for victims of anti-Semitism and bigotry.

The Democratic governor, who overwhelmingly defeated a recent recall attempt, made the announcement during a visit to the Simon Wiesenthal Center’s Museum of Tolerance in Los Angeles, accompanied by lawmakers and organizational leaders.

According to a news release, the council will work to identify instructional resources to teach students across California about the Holocaust and other genocides, as well as provide young people with the tools necessary to respond to on-campus instances of anti-Semitism and bigotry.

“We find ourselves in a moment of history where hate pervades the public discourse,” said Newsom, according to the release. “National surveys have indicated a shocking decline in awareness among young people about the Holocaust and other acts of genocide. But in California, we are offering an antidote to the cynicism that this is how things are and responding to that hate the best way we know how—with education and empathy.”

The creation of the council was a response to legislation in the California Senate from State Sen. Henry Stern (D-27th District) who introduced the “Never Again Education Act” in the California legislature, which also established a 15-member governor’s council and, if passed, could create more parameters.

Senate Bill 693 was favorably received in the legislature and is supported by the Jewish Public Affairs Committee of California.

Stern, Attorney General of California Rob Bonta and State Superintendent of Public Instruction Tony Thurmond will serve as the council’s co-chairs. The council’s other members will include elected officials, academics, advocates and organizations from diverse communities impacted by genocide throughout history.

“As we continue to confront the stain of bigotry and anti-Semitism in California and across the country, it is imperative that we come together to develop tools to combat hate across our society, including in education,” Bonta said in the release. “The governor’s council will ensure California schools are positioned to protect our communities and recognize the trauma of the past.”

Also to be established is a volunteer speaker’s bureau, which would include Holocaust survivors who can engage teachers and students in conversations about the topic. It will also provide best practices and resources to schools that are dealing with acts of discrimination.

According to a news release from the Simon Wiesenthal Center, Newsom called the 10,000-square-foot social-lab exhibit remarkable and regretted not having visited it sooner.

He also viewed the archival collection exhibit, “The Hitler Letter,” featuring a letter written by Adolph Hitler on Sept. 16, 1919, six years before he published his manifesto Mein Kampf. In the letter, Hitler called for the “uncompromising removal of the Jews altogether.”

“It is a shocking reminder that anti-Semitism and hate are flourishing once again, only 70 years after the Holocaust,” the center’s news release stated.