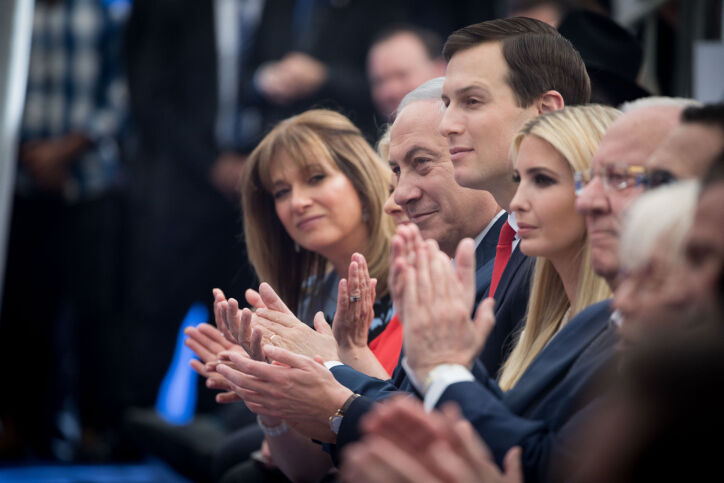 To the dismay of its opponents, the administration has transformed U.S. policy on Jerusalem and settlements. Will they all be reversed by a Biden administration?

For President Donald Trump’s Jewish supporters, these last moves are just the icing on the cake. Both the decision to remove any territorial restrictions on scientific and academic bilateral agreements, which puts into action the administration’s 2019 ruling that West Bank settlements should no longer be regarded as “illegal,” and the ruling that American citizens born in Jerusalem will be able to name their place of birth as “Israel” are the culmination of a revolution in American Middle East policy.

Critics of the president are putting this down to politics rather than principle. But at this point, the question to be asked about Trump’s policies towards Israel is not whether they are going to help him get re-elected (which is highly unlikely), but whether his decisions will withstand the test of time if the polls are correct and he’s defeated by former Vice President Joe Biden.

The magnitude of the shift of policies dating back to 1967 and even 1948 cannot be overestimated. Trump’s decision to recognize Jerusalem as Israel’s capital and move the U.S. embassy from Tel Aviv to Jerusalem was a longstanding demand of the pro-Israel community. It was also one that even most activists, let alone Israel’s government, had long since given up on ever seeing happen.

Nor did anyone in the pro-Israel community dream four years ago that after a half-century of agreeing with the rest of the world that Jewish communities in the West Bank were illegal, the State Department would issue a legal opinion that would reverse that stand.

Yet he changed all that and more, including recognizing Israeli sovereignty on the Golan Heights and putting into place policies towards the Palestinian Authority that halted aid until it rescinded its funding for terrorism.

Foreign-policy veterans gravely predicted that going through with any of these measures, especially the shifts on Jerusalem and the settlements, would set the region on fire as outrage against Trump’s stands spread throughout the Arab and Islamic world. But to the dismay of his opponents and the shock of Obama administration alumni, these earthshaking reversals did not result in widespread violence and chaos. To the contrary, Trump’s foreign-policy team helped midwife the Abraham Accords, a remarkable turn of events in which the United Arab Emirates, Bahrain and Sudan—with the promise of others following suit before long—normalized relations with Israel.

A few years ago, critics of Israeli Prime Minister Benjamin Netanyahu were warning of a “diplomatic tsunami” orchestrated by the Palestinians and former President Barack Obama that would leave the Jewish state isolated.

Today, thanks to their intransigence to even meet Obama halfway as he desperately sought to revive negotiations whose goal was to grant them statehood and a deal that would push Israel back to the 1967 lines with a few minor adjustments, it’s the Palestinians who are isolated. This is due, in large measure, to Obama’s efforts to appease Iran that essentially forced Saudi Arabia and other Gulf States into Israel’s arms. Though they still pay occasional lip service to the Palestinian cause, they have given up on them, rightly convinced that Palestinian Authority leader Mahmoud Abbas and his Fatah Party, as well as their Hamas rivals, are simply incapable of making peace with Israel on any terms.

Trump’s stand didn’t make a Palestinian state impossible. But should his rulings positions remain in place, they do fundamentally alter the terms for any future negotiations, compelling the Palestinians to acknowledge that even if they were willing to make peace, there would be no wholesale evictions of hundreds of thousands of Jews from their homes in Judea and Samaria, let alone Jerusalem. Any talks would be conducted on a basis that considered the West Bank disputed territory rather than, “Palestinian land,” as is the assumption of the rest of the world, a position that erased both Jewish rights and international agreements which contradicted the assumption that Israel had no legitimate claim.

But what happens if Biden is sworn in next January, and veterans of the Obama administration and other foreign-policy establishment favorites replace Trump’s people? Does this mean that Trump’s Middle East revolution will be swept away?

While the answer to that question would be up to Biden and his chief advisers, the answer is that even if they wanted to, not all of Trump’s rulings or his achievements could be replaced easily. And if Biden is wise, he’ll avoid the temptation to expunge evidence of the Trump presidency when it comes to Israel and the Mideast.

Biden plans to return the United States to the weak and disastrous 2015 Iran nuclear deal. Whether he goes so far as to lift sanctions on Tehran is open to question, but there’s no doubt that, like the Palestinians, Iran is very much hoping for Biden to win while the Arab states (as well as most Israelis) are rooting for Trump.

It would also only take a stroke of the pen for Biden to reverse Trump’s stand about the settlements being illegal. And it’s likely that he’ll do so since pressure on Israel to accept a massive territorial surrender as part of the price for a comprehensive peace and a two-state solution that the Palestinians don’t really want is one issue on which an inveterate flip-flopper like the former vice president has never wavered throughout his career.

But don’t expect him to move the embassy or waste much time actually trying to revive peace talks.

Biden has already signaled that the embassy will remain in place since, although he regrets Trump’s decision, moving it or making formal statements undoing the recognition will merely generate futile arguments that won’t help him accomplish a thing. And surely even Biden understands that Obama wasted precious time, energy and political capital engaging in endless and pointless quarrels with Israel that never moved the Palestinians to negotiate seriously.

Should the Democrats return to power, Biden will have his hands full dealing with the coronavirus pandemic, a devastated economy and a host of other problems. Many in the left-wing activist base of his party would cheer attacks on Israel. But it’s likely that even the left will prioritize his adopting other elements of their radical and destructive agenda like court-packing and the Green New Deal. Expending the kind of political capital it would require to move the embassy or a major diplomatic offensive aimed at reviving talks with the Palestinians would be a blunder as well as a fool’s errand.

Even his most virulent critics should understand that Trump’s legacy on this issue will not be so easily forgotten.

There’s more to what he accomplished in the Middle East than a new embassy or agreements that Democrats thought were impossible. The leap of imagination that it took for him and his team to label previous American policies as mistakes, coupled with the warnings of the foreign-policy establishment as fiction, has forever changed the way Americans think about the region.

The Jerusalem decision and the Abraham Accords—and all that went with them—exposed the policies of Trump’s predecessors and the dire warnings of State Department veterans as myths and even lies. Though many of Trump’s decisions may be reversed, the so-called return to “normalcy” won’t change the facts on the ground, make peace with the Palestinians or cause the Arab states to cease acting in their own interests by treating Israel as an ally.

Israel may face grave difficulties in the next four years, but never again will it be possible for its critics to say that the policies that Trump carried out would be disastrous since we’ve already seen how successful they were in advancing the cause of peace. Trump may soon be gone. Still, there’s no turning back the clock so as to allow us to pretend that his establishment critics know what they’re talking about when it comes to the Middle East.

Caption: Israeli Prime Minister Benjamin Netanyahu with Ivanka Trump, daughter of U.S. President Donald Trump, and senior adviser and presidential son-in-law Jared Kushner at the official opening ceremony of the U.S. embassy in Jerusalem on May 14, 2018.
Photo by Yonatan Sindel/Flash90.