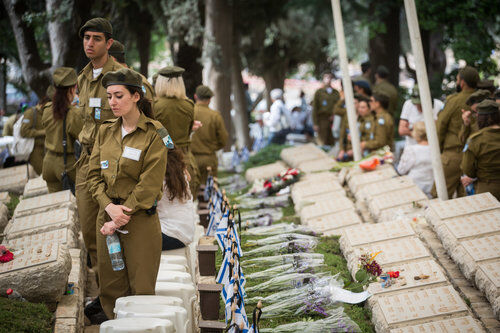 Yom Hazikaron tells us that we are part of a community that witnesses and remembers in order to learn and care and build.

For some of us, this is a whole year we don’t want to remember. A year of COVID-19, with many people sick and out of work or in the hospital. It hasn’t been easy. Yet, it’s surprising that there wasn’t more history passed down about a similar plague, the Spanish flu in 1918-1920, which affected a third of the world’s population.

Maybe they didn’t want to remember. And, of course, there was a lot less communication then—no e-mail or Instagram or Twitter. But Jews—we are a nation that likes to remember. In fact, the word “remember” is mentioned 169 times in the Torah, according to historian Yosef Yerushalmi.

Here in Israel, we are now immersed in the week of remembering. We start with Yom Hashoah, Holocaust Remembrance Day, and then about a week later, we move on to Yom Hazikaron, Israel’s Memorial Day for fallen soldiers and victims of terrorism. And my family, well, we’ve got another memorial a week later. My son Koby’s 20th yahrzeit.

Koby and his friend Yosef were 13 and 14 years old when they were murdered in the canyon near our home. We’ve been busy planning activities—a walk in the wadi where the attack happened on April 23, a music video, educational material on Yom Hazikaron for schools and organizations—all so that the boys will be remembered.

Remembering—passing down the stories of our lives, not just tragedies—is more important than you may realize.

Atlanta therapist Sara Duke noticed that kids who knew a lot about their families seemed more resilient. Her husband, Marshall Duke at Emory, researched this idea. He and his colleague, Robin Fievush, created a “Do You Know” scale—20 questions. For example, do you know how your parents met, or where your grandmother was born? Do you know the source of your name? Do you know where your grandparents married?

This scale turned out to be the best single predictor of children’s emotional health and happiness.

But there’s an additional idea that I want to share with you. It’s not just remembering and sharing our stories that is important. It’s also how we remember.

Memorializing has the word “memory” in it. It’s fixed in the past. Commemoration, on the other hand, is different, at least in Hebrew. (In English, it also involves the word “memory.”) In Hebrew, hantzacha has the word netzach embedded in it. Netzach means “eternity.” It looks towards the future. It’s alive. Something gets passed down so that it can be learned from and built upon.

After my son’s murder, my husband, Seth, and I were able to create Camp Koby for bereaved children, a living memorial. We wanted to do something connected with Koby. He loved sports and fun; he was a kid. We wanted to create something that helped kids feel happy.

Camp Koby is now in its 20th year. It has acquired its own life beyond the summer. Kids meet on their own or with their counselors during the year (at least when there’s no pandemic). Ongoing friendships are formed.

Last week, I ran into a former camper and she told me how important the camp was to her; how it saved her life. She said, “You created a living memorial to your son.”

One girl told us that Camp Koby was where she sang. She didn’t sing at home or at school. She said she sang at camp because she felt it was her place. She felt that she was with people who listened to her, who understood her, who cared.

Yom Hazikaron tells us that we are part of a community that witnesses and remembers in order to learn and care and build. Perhaps that’s why we are able to celebrate Yom Ha’atzmaut—Israeli Independence Day—directly following Yom Hazikaron.

Our connection to the Jewish people and to Jewish history gives us the ability to celebrate, regardless of how much we’ve endured. To look towards the future. To believe in the future. To have hope.

Because, ultimately, it’s what we do with the hard stories from the past that matters. Yes, many of the victims of the wars and terrorism in this country suffer from PTSD, but we also have tremendous post-traumatic growth.

You can say that this whole country, building this nation, is an example of post-traumatic growth. We’re masters not just of remembering, but of transforming our pain into growth and joy and celebration.

Sherri Mandell is the co-founder of The Koby Mandell Foundation, working with families of victims of terror. Her latest book is “Looking for Comfort: What I Saw, What I Learned and How I Blew It Training as a Pastoral Counselor.” She can be reached at [email protected]

Caption: Israeli soldiers stand by the graves of the fallen at the Kiryat Anavim military cemetery on Yom Hazikaron (Memorial Day), on May 1, 2017.
Credit: Hadas Parush/Flash90.

Arnona Penthouse new to the Market