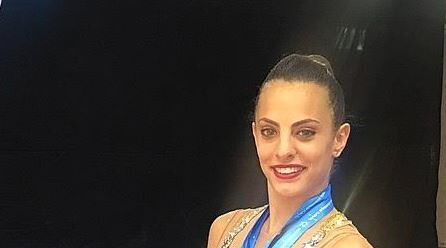 The Israeli gymnast takes first place in the clubs exercise, second in the ball and hoop categories and fourth for her ribbon routine.

The gold medal joined the two silvers she scored in the competition over the weekend, in the ball and hoop categories. She placed fourth in the ribbon exercise.

Ashram, who is one of Israel’s hopes for an Olympic medal in the Tokyo Games, scored 27.85 in the hoop exercise and went on to achieve a score of 28.6 for her ball routine.

Ashram’s clubs’ routine earned her a score of 28.5 from the judges, representing the first gold medal in a single exercise for an Israeli athlete at the European Championships.

Her ribbon exercise was the only one for which she did not win a medal: Ashram came in fourth with a score of 22.575 points.