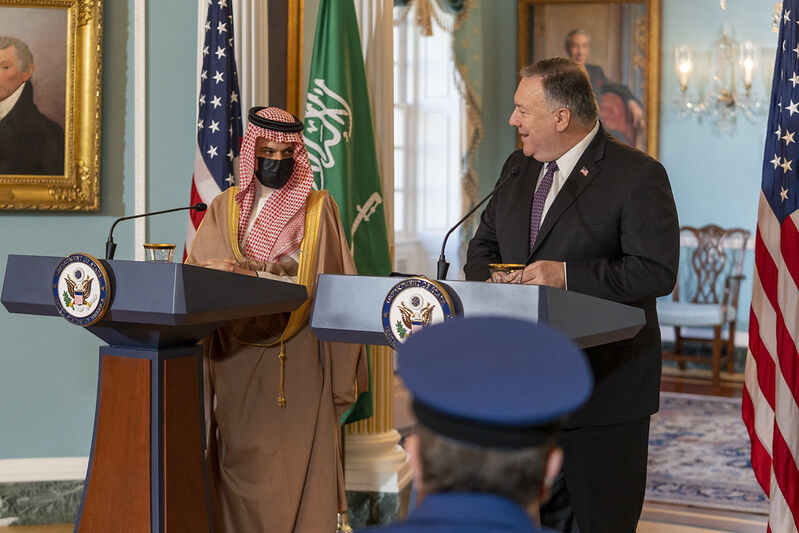 He said the Abraham Accords “reflect a changing dynamic in the region, one in which countries recognize the need for regional cooperation to counter Iranian influence and generate prosperity.”

Addressing the media alongside Saudi Foreign Minister Prince Faisal bin Farhan Al Saud at the U.S. State Department, Pompeo said he mentioned to his Saudi counterpart the Abraham Accords that solidified relations with Israel, the United Arab Emirates and Bahrain.

“We hope Saudi Arabia will consider normalizing its relationships as well, and we want to thank them for the assistance they’ve had in the success of the Abraham Accords so far,” said Pompeo. “We hope, too, that the kingdom will encourage the Palestinian side to return to dialogue and negotiation with Israel.”

Pompeo said the accords “reflect a changing dynamic in the region, one in which countries rightly recognize the need for regional cooperation to counter Iranian influence and generate prosperity.”

While Al Saud acknowledged Iran’s “destabilizing behavior,” such as its “financial and material support to terrorist groups” and “development of their nuclear program, ballistic missiles,” he made no mention of the normalization agreements.

While Saudi Arabia has not expressed objections to them, it has also not offered an endorsement. The kingdom has said that it would not normalize ties with Israel unless the Jewish state withdraws from territory it captured in the 1967 Six-Day War, and a Palestinian state is established.

In September, Saudi Arabia agreed to open its airspace to flights east from Israel after the kingdom, along with Bahrain, agreed to allow flights between Israel and the United Arab Emirate

Shame on Schneider for backing Omar

Use It or Lose It: Israelis Create Homegrown ‘Ben & Jerry’s’ Brand in Judea and Samaria

Israel warns US: ‘Something needs to happen’ about Iran

Yes, American Jews do care about and support Israel