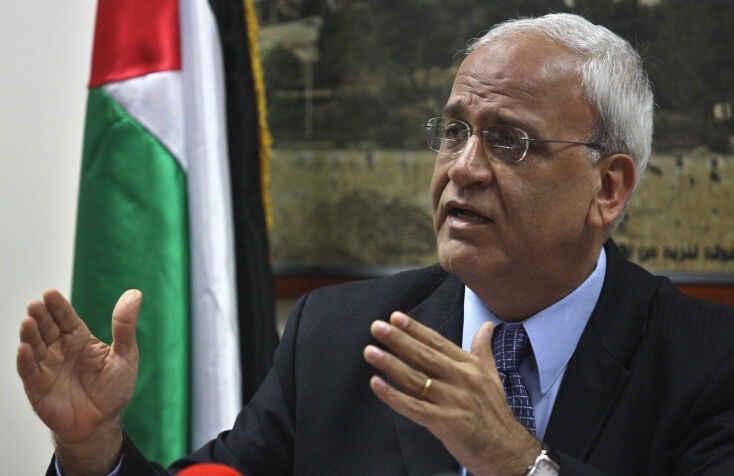 Even if healed by Israeli doctors, the smarmy Palestinian propagandist will continue to slander Israel until his very last breath.

It fills me with no pride that senior Palestinian official Saeb Erekat is being given VIP treatment for acute coronavirus at Hadassah University Hospital in Jerusalem, where he has been hospitalized in critical condition since last week. It does not make me feel moral or altruistic, nor does treating him represent the “finest Jewish ethics,” as some commentators have gushed. Israel is a light unto the nations without having to treat an enemy like Erekat.

In fact, I am not sure Israel’s defense minister should have approved Erekat’s request for emergency treatment in Israel. It is not at all certain that “Jewish values” require us to heal him, and I am quite certain that Erekat doesn’t deserve it. If Erekat is nevertheless benefiting from Israel’s ultra-benevolence, it is because we hopelessly want to believe that every person was created in the image of God.

Many Israelis and Jews worldwide are extraordinarily proud of the fact that Israeli hospitals treat hundreds of Palestinian Arabs and Arabs from countries that do not recognize Israel’s right to exist, especially innocent children. It is a fine, humanitarian thing to do—and maybe, just maybe, the kids saved by Israeli doctors might one day be a bridge towards peace.

But I never have bought the assertion that Israel has an “obligation” to do so stemming from its “responsibility for the occupation” or from some sweet-sounding and misinterpreted halachic dictum. Nor do I believe that the world truly grants Israel credit for such humanitarian effort. Few have tempered their political hostility towards this country in recognition of its medical kindheartedness.

I certainly do not feel that such goodwill must apply to corrupt and lying leaders such as Erekat. For the past 30 years, Erekat has been an ultimate obstruction to peace between Israel and the Palestinians; the dirtiest defamer of Israel, without shame—and, ironically, master planner of the Palestinian Authority’s campaign to isolate and boycott Israel.

Erekat is a unique phenomenon in the Palestinian orbit. Since Oslo, he has played the dual role of negotiator-in-chief for the PA and propagandist par excellence for the regimes of Yasser Arafat and Mahmoud Abbas. His record of lies and dissimulation is legion, and his dishonesty has deepened with time. History will yet record his abysmal role in the many mistakes of the Palestinian national movement.

In fact, Erekat never has been serious about peace with Israel, and purposefully obstructed every single round of negotiations. His presence on the Palestinian team was always a hindrance, not any help, to the diplomatic process. There never has been a parley where he brought a concrete compromise proposal to the table on any issue.

In the 2014 talks led by then-U.S. Secretary of State John Kerry, Erekat planned from the very beginning to abandon the process as soon as the P.A. got its terrorist henchmen freed from Israel jails. From the get-go, it was Erekat’s plan to revert to the “international route”—the seeking of unilateral global recognition for Palestinian statehood and the criminalization of Israel in international forums, including the International Criminal Court.

Even before Kerry could present his bridging proposals in March 2014, Erekat penned an official PLO strategy document (“Study Paper No. 15”) which detailed the Palestinian strategy to blow the talks out of the water. Erekat called upon the P.A. to “put forward requests for accession to international institutions, protocols and conventions, and specifically the four Geneva Conventions,” and to move to “reconciliation and the strengthening of Palestinian national unity … with the Hamas and [Palestinian Islamic ] Jihad movements in election of a new State of Palestine Executive Committee.”

Instead of seeking peace, Erekat specialized in ranting endlessly about Israeli oppression and crimes. And when he spoke to the global press, he lied baldly, badly and relentlessly. Remember the much-ballyhooed “Jenin massacre”? That was one of Erekat’s malicious and far-reaching fabrications.

More recently, Erekat spread the canard that Israeli troops at checkpoints purposefully infected Palestinians with COVID-19, and that other Israelis were spitting on Palestinian cars and property ‎to spread the disease. This is not too far from the classic anti-Semitic trope about Jews poisoning the wells in Europe.

It is also the height of chutzpah because Erekat knew that during the first months of the pandemic Israel did everything in its power to assist the P.A. in fighting coronavirus. Generous Israeli assistance to the P.A. lasted through the end of May when—at Erekat’s urging—the P.A. announced a boycott of all assistance from or through Israel, for any budgetary, humanitarian, or other need.

(This was in response to Israel’s announcement that it wished to advance the sovereignty plank in the new American peace plan. Ever since, the P.A. has refused to accept even the monthly transfer of customs duties collected for it by Israel, even though Israel set aside the sovereignty plan in August.)

Not only that. In May, the P.A. rejected receipt of two planeloads of coronavirus aid from the United Arab Emirates because the planes had landed at Israel’s Ben-Gurion International Airport. Erekat accused the UAE of “promoting normalization” with Israel, and Israel of “whitewashing” its coronavirus “crimes.”

And here is one more bitter, ugly irony from the propaganda shop of Saeb Erekat: When he got deathly sick this week, Erekat made a run for the best medical care Israel can offer—but he has cynically and cruelly denied the same opportunity to his own people.

How much more hypocritical and heartless can you get?

In short, Erekat embodies the mendacity and futility of the Palestinian mindset. His wretched record reveals just how far away Palestinian leadership is from accepting the premises necessary for true peace with Israel.

Some naïve Israelis have expressed the hope that if Erekat recovers, he might repent, that having enjoyed the blessings of first-rate and color-blind Israeli medical treatment, Erekat would come to see the error of his ways and cease demonizing Israel.

Or that once recovered Erekat might at least enable the treatment of everyday Palestinians in Israeli hospitals by re-funding this treatment (instead of vociferously defending P.A. payments to terrorists that slay Israelis).

Or that once recovered Erekat might stop cursing out Emiratis and Bahrainis who now are partnering with Israel to develop breakthrough medical technologies and even a coronavirus cure.

Or that once recovered Erekat might cease slandering Israelis as colonizers, agents of apartheid, war criminals and destroyers of al Aqsa.

To all of which I say: Don’t hold your breath for any such congeniality or reconciliation from Erekat. Even if his lungs are healed by Israeli doctors and he once again merits to breathe on his own, you can be sure that he will continue to slander Israel right up to his last breath.

David M. Weinberg, vice president of the Jerusalem Institute for Strategy and Security, was coordinator of the Israeli government’s Global Forum Against Antisemitism.