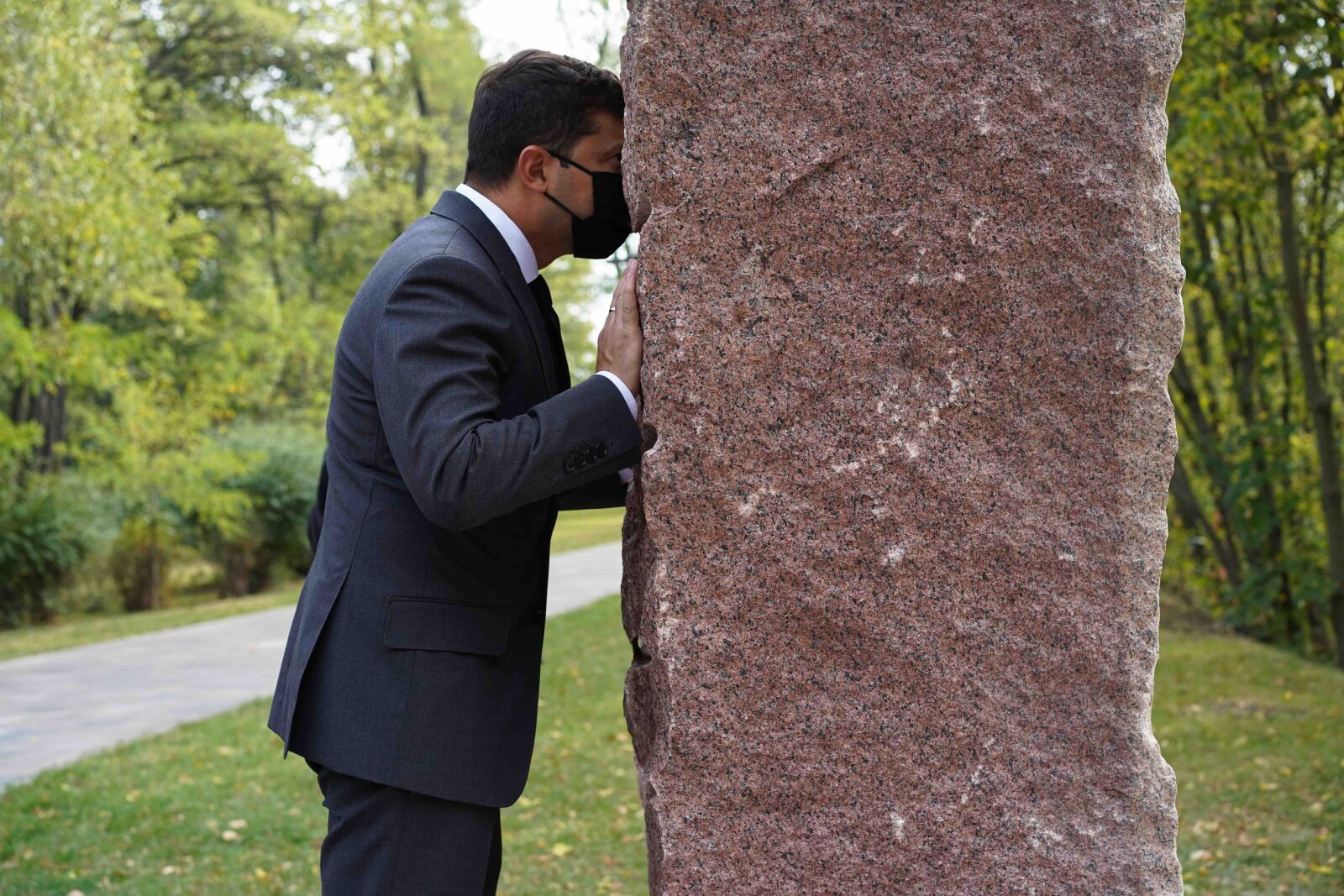 Announcement in advance of International Holocaust Remembrance Day on 27 January

21 January 2021 (Kyiv) – Ahead of International Holocaust Remembrance Day, the Babyn Yar Holocaust Memorial Center (BYHMC) unveiled its plans for constructing one of the world’s largest Holocaust memorial centers. The complex will be built at Babyn Yar, over an area of 150 hectares. It will include a dozen buildings in memory of the Jewish and non-Jewish victims of the Babyn Yar massacre and the estimated 1.5 million Jews murdered in similar Nazi mass shootings across Ukraine and Eastern Europe.

The buildings which will be erected as part of the complex include: A museum to commemorate the Babyn Yar massacre; a museum to commemorate the Holocaust of Ukrainian and Eastern European Jewry as a whole; a structure depicting the names of the victims; a religious/spiritual center including a synagogue, church and mosque; an educational and scientific research center; a multi-media center; a learning and recreational space for children; an information and conference center and more. The very first synagogue at the site, plus an additional exhibition space are scheduled to be completed this year, ahead of the eightieth anniversary of the Babyn Yar massacre, which will be commemorated in September.

The artistic concept for the museum complex is being formulated by Ilya Khrzhanovsky, BYHMC’s Artistic Director, in cooperation with international experts in museum development, including: Nick Axel - Head of the architectural design department at the Gerrit Rietveld Academy in Amsterdam; Robert Jan Van Pelt - Professor at the University of Waterloo, who chaired the working group which created the master plan for the future Auschwitz Museum; Troy Conrad Therrien – Chief Curator of Architecture and Digital Initiatives at the Solomon R. Guggenheim Museum and Professor at Columbia University; Ines Weizman - Head of the MPhil/PhD Architecture Program at London’s Royal College of Art; Barbara Holzer – Urban planning expert and Professor of Architecture and Interior Design at the Peter Behrens School of Art in Düsseldorf (DE); Adrien Gardere – A designer and museographer, who has designed several prestigious museums, such as the Louvre-Lens in France (2012) and the Cairo Islamic Art Museum in Egypt (2010); Marina Abramovic – An internationally acclaimed pioneer of performance art, who is also a writer and filmmaker. The team also includes talented young Ukrainian experts in various fields. Maks Rokhmaniyko – Architect and 3D model developer; Anna Furman – Director of the BYHMC Names Project; Oleg Shovenko – Head Manager of the BYHMC library and publishing project and Anna Kamyshan – Head Manager of the BYHMC Architectural and Design Department.

33,771 Jewish victims were shot at the Babyn Yar ravine by the Nazis during just two days, 29 and 30 September 1941. Tens of thousands of Ukrainians, Roma, mentally ill and others were shot thereafter at Babyn Yar throughout the Nazi occupation of Kyiv. The estimated number of victims murdered at Babyn Yar is around 100,000, making it Europe’s largest mass grave. The new museum complex will transform the area from a place of terror and killing, into a place of peace and tranquility.

The Artistic Director of the Babyn Yar Holocaust Memorial Center, Ilya Khrzhanovsky, who constructed the concept together with a team of international experts, discussed the vision of establishing a museum complex at Babyn Yar: “The decision to establish a museum complex expanding across the entire territory where one of the greatest tragedies of the Holocaust took place, was taken in order to build a place of commemoration and learning, of observation and doubt. It will transform a place of killing and destruction into a sacred space. It is designed in a way that everyone can connect to a life that was and is no longer. The construction of this complex will keep the story of the Jews of Ukraine and Eastern Europe alive.”

The chair of the Supervisory Board of the Babyn Yar Holocaust Memorial Center, Natan Sharansky, who was born in the Ukraine, noted that he knew nothing about the Babyn Yar massacre during his childhood, due to the Soviet policy of suppressing memory of the tragedy after the Second World War. He said that the establishment of the center is essential for Holocaust remembrance: “The concept which was presented is both very interesting and amazing. It demonstrates how the museum and educational center will not only both be high quality, but at the same time different from many other Holocaust centers. As such, it will help fill a vacuum in the field of Holocaust studies.”

Supervisory Board member Irina Bokova, former Director General of UNESCO, also gave her impressions: “Various aspects of the concept are striking. It is both innovative and at the same time, it includes an emotional component, which needs to be maintained. Based on the experience of my previous work, including at UNESCO, I well know that it is not easy to retain memory. The team is certainly heading in the right direction.”

Supervisory Board member Aleksander Kwasniewski, former President of Poland: “The plans that we saw showed both high quality and an innovative approach. The Memorial Center can, without replicating other world Holocaust centers, become something completely new. It can do so in such a way that will allow us to find a common language with the younger generation, in order to show the depths of this tragedy.”

Supervisory Board member Svyatoslav Vakarchuk, Ukrainian politician, public figure and musician: “I am amazed by the team’s work. The Babyn Yar tragedy and the museum itself must become part of the global picture. At the same time, being in the very heart of Ukraine, in our capital, it will reflect Ukraine’s history within the Holocaust, World War II, part of the history of the land we live in. The combination of this global context with the national context will make it a real success.”

BYHMC is already operating a series of research and education programs. Through the Center’s work, around 20,000 previously unknown names of massacre victims have been uncovered and verified. Meanwhile, scientific research at the Center has been completed to determine for the first time exactly where the shootings took place in the Babyn Yar Forest. In addition, educational programs have been built together with Yad Vashem and a number of new memorial structures have been erected in the area.

BYHMC plans + plans 2: Illustrate the plans for the complex.

BYHMC installation: The existing Sefirot installation is made up of 10 stainless steel columns, which feature over 100,000 holes, shot with bullets of the same caliber as those used by the Nazis.

President of Ukraine, Volodymyr Zelensky: At an existing installation at Babyn Yar. The statue includes images, footage and information on the historical context of the massacre.

The Babyn Yar Holocaust Memorial Centre is a non-governmental charity whose purpose is to preserve and cultivate the memory of the Holocaust and the Babyn Yar tragedy in Ukraine by turning the Babyn Yar area into a place of remembrance. The Foundation’s mission is to worthily honour the memory of the victims of the tragedy and to contribute to the humanization of society through preserving and studying the history of the Holocaust. In September 2020, Ukraine’s government represented by the Minister of Culture Oleksandr Tkachenko, under the auspices of the President of Ukraine, Volodymyr Zelensky, signed a memorandum of understanding and cooperation with BYHMC, represented by Supervisory Board member Ronald S. Lauder, to promote the construction of a fitting memorial to the Babyn Yar tragedy. A series of commemorations during 2021 will mark the eightieth anniversary of the Babyn Yar tragedy.