May 04, 2021 | News | Terrorism | National
Balloon terror returns as Hamas turns up the heat 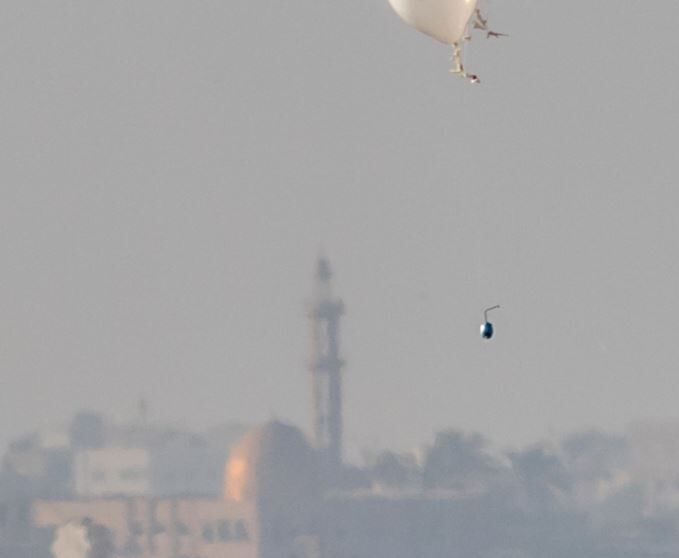 Terrorists from the Gaza Strip launched two balloons attached to incendiary devices at southern Israel Monday evening. Luckily, neither of them exploded.

Shaar HaNegev Regional Council spokeswoman Adi Meiri said they were found in the agricultural fields of Kfar Aza, just a few kilometers from the Hamas-run coastal enclave. A police sapper was called in to remove the dangerous canisters.

In addition, Meiri said that a man reported to the police that he heard something explode above his car while driving in the area. Other residents said they had seen balloons in the air as well. A large force arrived and began combing the area for them.

Over the last few years, it has become a regular sign of the approach of summer’s dry heat for incendiary kites and balloons to be sent into the sky from Gaza, to land wherever the wind takes them. Thousands of acres of Israeli forestland and crops have been destroyed by fire. Providentially, very few have come down in populated communities, and when they have, they have been safely defused before causing a mass casualty event.

These first sightings of 2021 come as Palestinian attacks are on the rise again after over a year of relative quiet, a combination of Covid and preparations for the Palestinian elections, which have since been “indefinitely delayed.”

Kan News’ Palestinian affairs reporter Gal Berger says that with the elections off the table, all signs point to Hamas turning back to terrorism. It blames Israel for the election decision, which was in fact made by the Palestinian Authority.

Hamas fired 45 rockets at Israel over the last weekend in April, a message of “support” for their “brothers” — Arabs rioting in Jerusalem since mid-April, the start of Ramadan. Again fortuitously, most of them landed in open areas and only a few people were lightly hurt when running for shelter.

However, Hamas is more interested in focusing its attention on igniting terrorism in Judea and Samaria, away from its home base, Berger says.

On Sunday, three teenagers were wounded, two seriously, when a Palestinian terrorist shot them from his car as he drove by their bus stop at the Tapuah junction in Samaria. The IDF estimates that this was a ‘lone wolf attack’ and does not signify a new wave of terrorism. Nevertheless, the army will beef up its forces in the area in an effort to thwart copy-cats as well as search for the attacker.

The army is on heightened alert as several days next week are historically marked by Arab violence. The Ramadan holy days of Laylat al-Qadr and Eid al-Fitr coincide with Israel’s Jerusalem Day marking the liberation of the capital in 1967, and Nakba Day, the “catastrophe” of May 15, when Israel declared its independence and beat back five invading Arab armies.