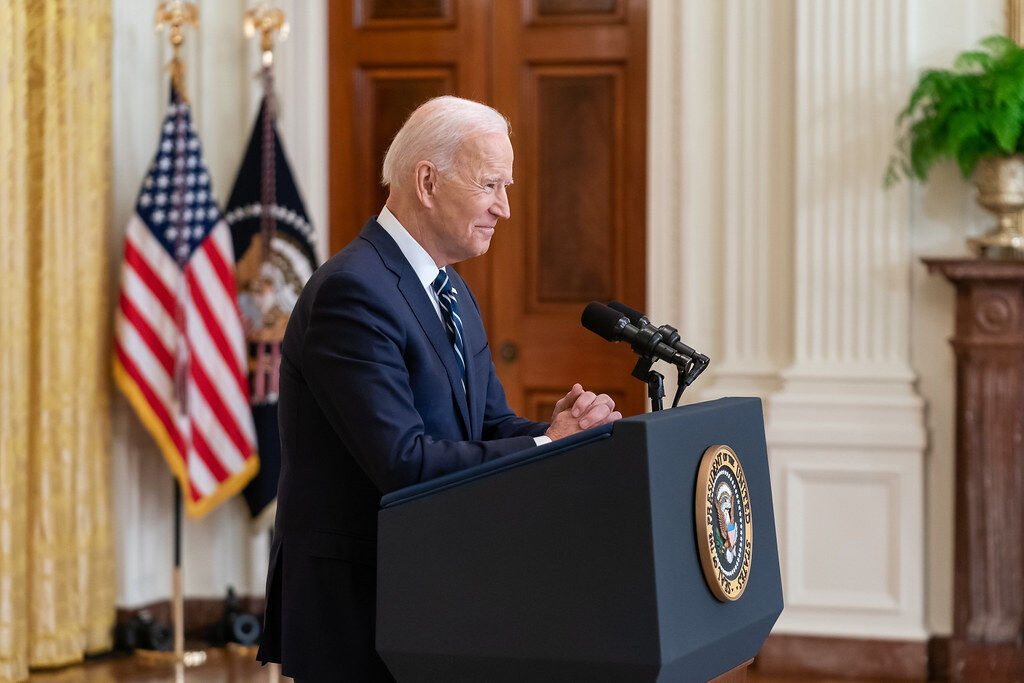 The main topics are likely to be Iran, a Middle East security alliance, the future of the P.A., the Russia-Ukraine-Syria triangle and the “I2U2” coalition, experts tell JNS.

U.S. President Joe Biden is scheduled to visit Israel on July 13. Analysts tell JNS that among the key topics to be discussed will be the Iran threat, a security alliance between Israel and Gulf states, the U.S. consulate in Jerusalem, the poor health of Palestinian Authority head Mahmoud Abbas, Russia-Syria-Ukraine and a new global “I2U2” coalition involving India.

Negotiations for a new nuclear deal with Iran have been on the ropes since April, when the Islamic Republic said it would not return to talks in Vienna with Western powers. Jonathan Rynhold, head of the department of political studies at Bar-Ilan University, said Israel will challenge the United States to answer the question of how it plans to react if no deal is reached and Iran continues enriching uranium.

“If there is a deal, Israel will want to know, ‘How are you going to deal with the fact that in a few years’ time Iran will be a nuclear threshold power with the ability to go nuclear in the matter of weeks?’ ” Rynhold said.

The Biden administration clearly thought it would be easier to make a deal with the Iranians than has proven to be the case, said Rynhold, and are now “increasingly skeptical” an agreement can be reached.

Emmanuel Navon, senior fellow at the Jerusalem Institute for Security Studies (JISS), put it in stronger terms, telling JNS the United States had “basically lost any hope” of reaching a deal. Washington will therefore now focus on a new strategy, a “Plan B,” for dealing with the mullahs, he said.

That “Plan B,” he believes, will be a security alliance among U.S. allies in the region, including Israel, Saudi Arabia and the Gulf States.

While it won’t be a formal alliance like NATO (the North Atlantic Treaty Organization), obligating members to come to each others’ defense in case of attack, it will involve “a higher level of coordination among the members,” he said.

Such coordination will include “early warning, and common responses to possible attacks from Iran and its proxies throughout the region,” he said, first and foremost among them being Hezbollah in Lebanon.

The idea of an alliance evolved “slowly and progressively” as the likelihood of a new agreement with Iran faded, he said. In the wake of the Abraham Accords, it became clear that “coordination had to be upgraded, militarily, together with the United States.”

Yoni Ben Menachem, senior analyst for the Jerusalem Center for Public Affairs (JCPA), told JNS that the military alliance will focus on countering ballistic missiles and Iranian drones. Saudi Arabia, Egypt, Jordan, Bahrain and the United Arab Emirates (UAE) will be part of this alliance, he said.

“We’re talking about deployment of Israeli radar in these Arab countries, exchanging intelligence, early warning and cooperation to identify the launching of Iranian missiles and drones and their interception,” he said.

“This is going to happen because this is the interest of all the Arab countries and Israel,” he said, noting American involvement is due its concern about its large military forces in the region. “All the American bases in the Middle East are under danger of attack, so the Americans will be part of this alliance.”

President Donald Trump downgraded the Jerusalem consulate, which acted as a de facto embassy to the Palestinian Authority, in March 2019. It was presented by the State Department as an “internal administrative decision” having to do with improved efficiency, as its functions were rolled into the U.S. embassy, which had been moved from Tel Aviv to Jerusalem. However, it was widely seen as another demonstration of U.S. solidarity with Israel’s position that all of Jerusalem is its official capital.

However, the United States held on to the consulate building, and operated a “Palestinian Affairs Unit” there.

“Biden will say to the Israelis that he is planning to move forward with the consulate because this is a promise he gave to the Palestinians,” said Ben Menachem, noting that the U.S. president intends to visit eastern Jerusalem during his trip, and is expected to announce the restoration of U.S. financial aid to a hospital network in that part of the city, funding that Trump stopped.

At the same time, Biden doesn’t want a confrontation with Israel’s government, said Ben Menachem. By the time of Biden’s visit, Israel will be led by a caretaker government at the head of which will stand Yair Lapid of the center-left Yesh Atid Party. “Biden is happier with Lapid as prime minister because he’s considered more moderate,” he said. “Everything will go smoothly in order to try to help Lapid.”

Navon added that the U.S. administration had pushed off a consulate decision more than once to avoid disharmony with the coalition government when it was led by Naftali Bennett of the right-wing Yamina Party so as not to “give the opposition ammunition.”

“On the ground, everybody knows that there is a consulate,” Navon said. “But as long as the U.S. doesn’t make an official statement about it, then it’s not considered embarrassing for the Israeli government.”

Ben Menachem agreed. “They’re emptying of meaning the Trump declaration on Jerusalem as the capital of Israel because slowly they’re reversing the situation to what it had been before the Trump announcement,” he said.

The day after Abbas

P.A. leader Mahmoud Abbas, 87, is in the seventeenth year of a four-year term. A heavy smoker and overweight, he has had health episodes in the past. In 2019, it was reported that an Israeli doctor had secretly treated him after his condition deteriorated for unknown reasons. In 2018, he visited a Baltimore hospital specializing in cancer treatment.

“Apparently, the health condition of [Abbas] is not good. Of course, officially they deny that but behind the scenes they’re preparing for his succession,” said Ben Menachem.

There is a successor in the wings—Hussein al-Sheikh, a member of the PLO’s executive committee. According to Ben Menachem, “He is the closest one to [Abbas], who has chosen him to be his successor. There is also a consensus among Israel, the United States, Jordan, Egypt and the Gulf states that al-Sheikh will take over until elections are held.”

Both the United States and Israel want to avoid a situation where the P.A. descends into bloodshed as rival parties vie for control when Abbas passes from the scene, he said.

“This is going to be one of the main topics,” he said.

Navon, however, is less certain that Abbas’s days are numbered.

“This is something that’s been discussed for many, many years, but he’s been surviving. So for all the discussions about ‘the day after,’ despite his age and despite his being a smoker, he seems to be hanging on,” he said. The discussion at this point is still “academic,” he said, but agreed that the subject “will probably come up” during Biden’s visit. If so, he said, “they won’t make it public so as not to embarrass Abbas.”

Russia supports Syrian President Bashar al-Assad and maintains two military bases in Syria. Israel has struck a delicate balance between showing support for Ukraine while not overly angering Russia, which would complicate Israel’s mission to prevent Iranian entrenchment in Syria.

Rynhold said that the United States doesn’t want Israel to push too far.

“For all the shouting about how Israel needs to do more to support Ukraine, the Americans understand that it’s not in their interest either that Israel anger the Russians to the point that the tacit deconfliction agreement in Syria between Israel and Russia collapses. Because then, the Iranians will get stronger in Syria, and that’s bad for the Americans as well,” he said.

“Also, Israel has a good relationship and is still speaking to Russia, and that’s useful to the Americans,” he added.

The conversation between Biden and Lapid on this topic may amount to a sentence or two, after which their teams will hash out the details, “if they haven’t already,” he said.

“I2U2,” a new bloc comprising India, Israel, the UAE and the United States, will formally launch with a virtual summit of the country’s leaders during Biden’s visit to Israel.

The bloc has been described as a forum to deal with food security in the wake of the Russia-Ukraine conflict, and to boost trade and economic ties among the member countries.

Rynhold surmises is that it also has to do with China, which has been developing its relations in the Gulf region. “My guess is that by trying to tie Israel, India and the United Arab Emirates together, the United States is trying to contain China’s ability to develop its ties there and gain leverage on global energy markets,” he said.

“The Americans are waking up to the fact that, despite producing energy, they’re not insulated from what goes on in the broader market in terms of pricing, and the consequences of supply problems, which can destabilize their allies,” he said.

None of the analysts brought up the two-state solution as a topic for discussion, although the Biden administration has stressed its commitment to that paradigm.