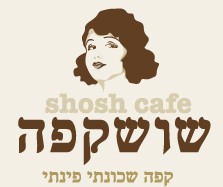 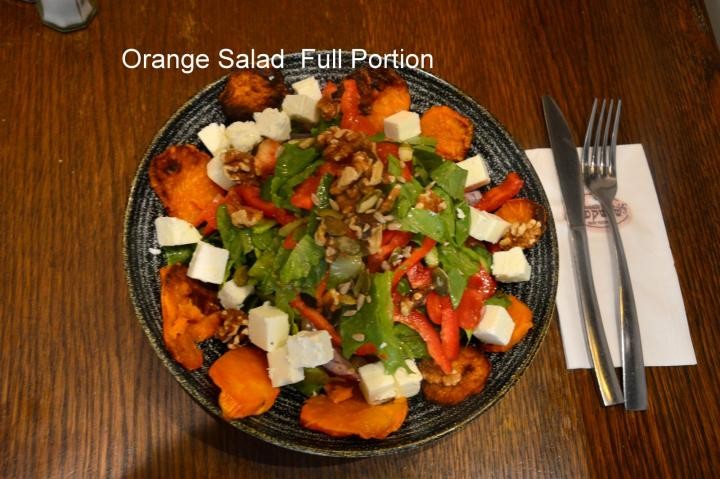 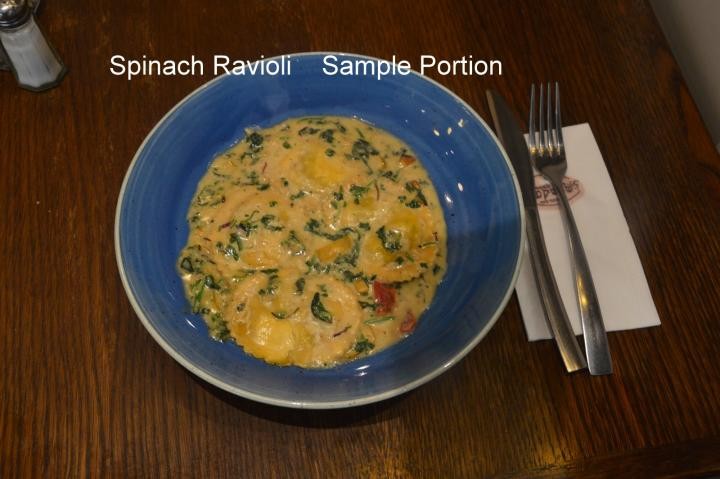 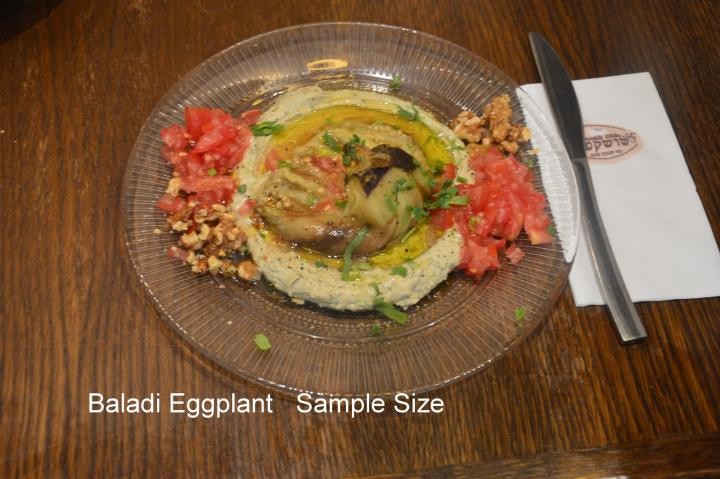 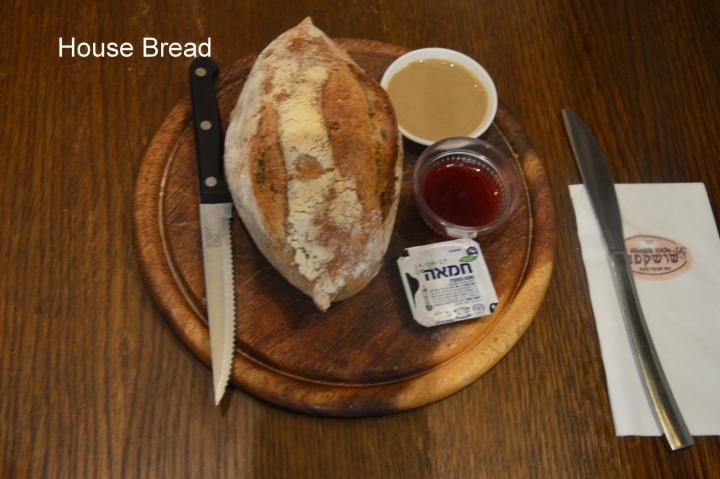 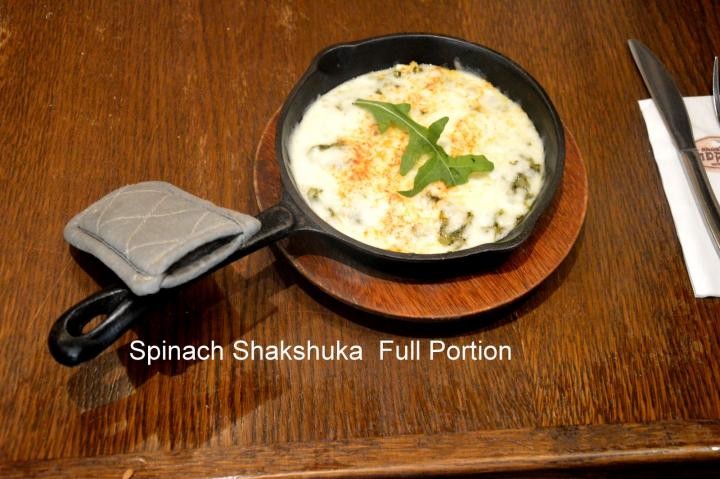 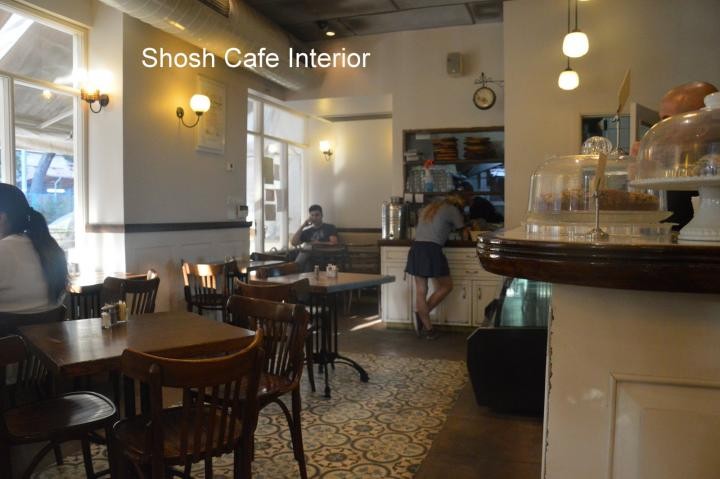 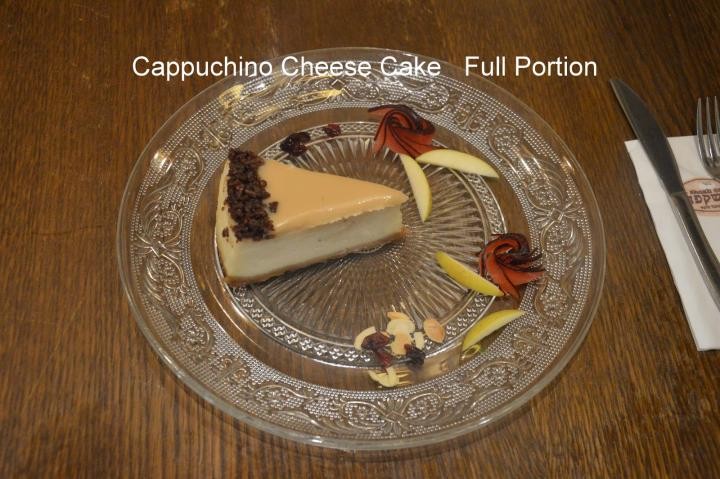 02-625-2222 https://misadot.rol.co.il/sites/shosh-cafe/
Keren Kayemet, &#1511;&#1511;\\"&#1500; 31, Jerusalem
by Sybil Kaplan
Photographs by Barry A. Kaplan
Shosh Café
Keren Kayemet l'Yisrael 31
Phone 02 625-2222
Hours: Sunday through Thursday, 8 a.m. to 11 p.m.
Friday, 8 a.m. to about 3 p.m.
Saturday evening - closed during summer, open in winter
Kashrut - Mehadrin B'datz, Chug Chatam Sofer Petach Tkvah
"Shosh is special," says owner, Nir Efrati. He had a dream to one day own a restaurant and when Shosh Café, which was in Katamon, came up for sale in 2010, he bought it and decided to stay with that name.
On the Keren Kayemet side, the awning covers a patio, which seats 12, with a table at one end selling the restaurant's breads from Teller Bread Company on Agrippas, by Machaneh Yehudah.  Windows look into the restaurant.  The wrap-around patio, covered overhead, seats 26.
Inside at dark wood tables and chairs is a very simple décor with wall lights and two mirrors on a wall at one end. There is seating for 25 and a bar at the back, of white wood trimmed in dark brown wood; a glass display case has desserts in front of the bar, and a wall of dark wood glass cabinets are high on the wall behind.
The extensive menu is very impressive. The "Good Morning" breakfast is served until 6 p.m. with 7 choices like the French breakfast and the Country Style, ranging in price from NIS14 to NIS60 with two choices for two people to share.
There are 8 Sandwiches like the Mediterranean, the Goat Cheese and the Minis with three small sandwiches, all served with the house bread and fresh vegetables, ranging from NIS44 to NIS48.
Ten Salads are available, each with house bread and butter, like Fattoush, Teriyaki and Health, ranging in price from NIS46 to NIS58. For our first tasting, Nir chose the regular size Orange Salad (NIS58). Piled high with cucumbers, red peppers, zucchini, eggplant, Feta cheese squares, and more, it is garnished with roasted sweet potato slices and walnuts. This is a very fresh and seasonal salad with a great vinaigrette.
Five Appetizers range from NIS22 to NIS35.
There are 5 Toasted Bagels, ranging in price from NIS46 to NIS48, each served with a green salad and dressing.
There is a soup of the day and another soup, each served with bread and butter for NIS32.
Nine Specials such as shakshouka, camembert pastry and Halloumi skewers. range from NIS48 to NIS58. Nir had the waitress bring us a small portion of Baladi Eggplant in Techina (NIS50),  garnished with walnuts and chopped tomatoes. This techina was thick and not overpowering, the eggplant was smooth, a melt-in-your-mouth taste, and my companion said it's the best eggplant he has tasted.
Another tasting from the Specials was Spinach Shakshuka (NIS55 for a regular portion).  Served in a hot personal pan sitting on a wood base, the bechamel sauce with Mozarella cheese on top was a great change from the typical poached egg over tomatoes version and was served with the house bread and butter.
A side note on the House Bread (available at NIS10 separately) and made by Teller Bread Company. For breakfast, it is served with butter, jam and sweet techina; with several of the breakfasts, it is also served.
If you like the bread, it is available, in a large size, for NIS19 at a table by the front patio.
There are three quiches, each comes with a salad, and they are NIS52.
Pasta is a big specialty--spaghetti, fettuccini, penne, ravioli, gnocci, 14 different versions at NIS58 to NIS62. Nir gave us a small portion of Spinach Ravioli (NIS62 for full portion). Made with Ricotta cheese, creamed spinach and a red pepper sauce, it was well prepared, and the sauce complimented the ravioli.
The Lasagne of the day is NIS62 and comes with a salad.
Sweet tooth?  11 kinds of waffles (NIS38-NIS46) are available, such as cream cheese and cinnamon, banana split and Oreo cookies.
Six other sweets are NIS35 to NIS45. We could not resist the Cappuccino cheese cake (NIS35), a luscious looking piece, as well as luscious tasting, garnished with pink apple flowers, almond slivers and raisins.
There are 4 hot drinks (NIS28 each); 13 smoothies (NIS24 to NIS28) such as strawberry, mango and pineapple; 3 beers (NIS22-NIS26); 3 wines (NIS60 and NIS115); and 19 hot drinks (NIS9 to NIS32).
Among the16 cold drinks (NIS13 to NIS36) was our favorite, ice coffee, NIS18, garnished with coffee beans, thick and tasty, and served in the tall, old-fashioned, American-style ice cream soda glasses.
The efficient, pleasant and knowledgeable waitress was American-born Rachel from Florida, in Israel less than a year.
One additional point--there was a certain simple style to all of the dishes, yet all had beautiful presentations.
If you are looking for a dairy café with friendly wait staff, exceptionally large portions and a relaxing atmosphere, try Shosh in Rehavia for a real treat.
The writer and photographer were guests of the restaurant.
Share: