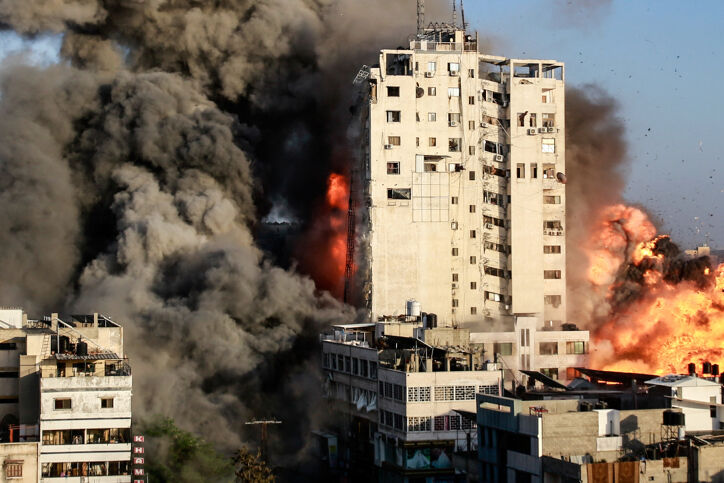 The terror group would sign a ceasefire in a heartbeat if offered the opportunity. Its leaders understand that their situation is bad and getting worse by the minute.

Abu Hamza, Islamic Jihad’s spokesman in the Gaza Strip, stood before the cameras on Wednesday and said his organization was willing to fight Israel as long as necessary. “Our struggle will not cease,” he said. Despite Hamza’s boasting, there is no chance of that happening. Had Israel responded to attempts to mediate a ceasefire—and it’s a good thing it didn’t—Gaza’s terror groups would have signed a ceasefire deal yesterday.

There are two main reasons for this. The first is that according to those in the joint Hamas-Islamic Jihad command center in Gaza, the organizations have already achieved their public relations victory against Israel: They took the Jewish state by surprise, fired rockets at Jerusalem and sending Knesset members running at the sound of sirens. They have proven their ability to launch over 1,000 rockets at targets throughout southern and central Israel, including Tel Aviv. They’ve killed several Israelis and wounded dozens.

Just as importantly, they believe they have succeeded in establishing the perception among Palestinians that it is Hamas and not the Palestinian Authority that is now defending the Al-Aqsa Mosque, leading the struggle for Jerusalem and efforts to “liberate Palestinians from the yoke of Israeli occupation.”

Another, no less important reason Hamas would now quickly sign a ceasefire deal if it were offered the opportunity has to do with the increasing understanding in Gaza that over the past day, the balance of force has begun to clearly lean in Israel’s favor. The perception of a Hamas victory is slowly dissipating, and its situation is getting worse every minute.

It’s not just the precise intelligence that allows for the targeted killings of senior Islamic Jihad and Hamas officials, including Bassem Issa, commander of Hamas’s Gaza City Brigade, that have struck a nerve.

Alongside the terrorist organization’s institutions, buildings and facilities that have been destroyed, the Israel Defense Forces toppled multi-story apartment buildings that housed, among other things, Hamas’s headquarters, offices and weapons caches. Among the buildings targeted were the Hanadi tower, which collapsed, and later the Al-Jawhara tower, which housed, among other things, the offices of Hamas’s media outlet and its cyber warfare unit. The Al Shorouk tower was also destroyed.

Gaza appears to be in a state of shock over the forcefulness of the Israeli response and the incessant airstrikes by the Israeli Air Force. Hamas would like to end this round, for the reasons mentioned above, but in the meanwhile, it has been forced to respond with massive rocket barrages at Israel’s center in the hope of incurring mass casualties.

Israel acted correctly when it rejected offers for a ceasefire and has succeeded in tipping the balance in its favor. Nevertheless, we cannot be confident the air strikes and assassinations of senior figures from the air will be enough to restore confidence among Israel’s residents or deterrence against Gaza’s terrorist groups in the long term.

For one thing, the heads of the terrorist organizations in Gaza are still largely hiding in command centers dug deep into the earth and situated directly under residential buildings, in what is known as “Underground Gaza.” The same is true of their ammunition and weapons stockpiles. Assuming Israel has the necessary intelligence to strike these targets, such a strike would lead to mass casualties, something Israel has been trying to avoid. Fatou Bensouda, the chief prosecutor of the International Criminal Court, has already warned Israel against “the possible commission of crimes.”

However, Israeli decision-makers are themselves still on the fence, and rightfully so, as to whether to issue the order for a ground operation, without which it won’t be possible to completely collapse the Hamas regime.

Oded Granot is a journalist and international commentator on the Middle East.

Caption: Smoke and flames rise from a tower building hit by Israeli air strikes in Gaza City, on May 12, 2021.
Photo by Atia Mohammed/Flash90.