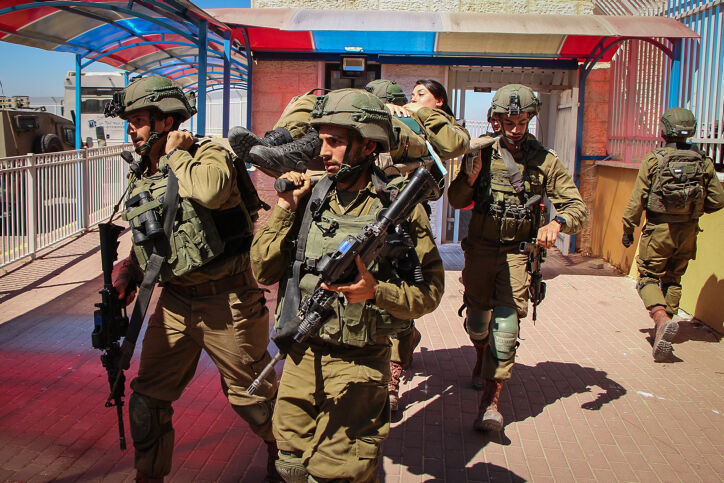 As the State of Israel faces intertwined health, economic and political crises, the IDF has been left without a new defense budget. Nevertheless, it is moving to adapt to a rapidly changing strategic environment.

Despite the absence of a new defense budget amid the ongoing health, economic and political crises plaguing the country, the Israel Defense Forces is taking important steps to reshape its force build-up in the face of a rapidly changing strategic environment.

The steps are outlined in the IDF’s Momentum multi-year working plan, which has received no government budgetary backing thus far. Under the present extraordinary conditions, the IDF has redirected its resources internally to push through some of its intended capability development, at least on a partial basis, as it awaits a new defense budget.

The maneuvers so far pursued by the IDF are designed to fast-track the evolution and deployment of new capabilities to deal with the “terror armies” that have risen up in Israel’s environment, and to enable Israel to better deal with the state backer of these terror armies: Iran.

Arming, training and funding the terror armies is part of Iran’s regional hegemonic drive. Iran’s malign activities threaten pragmatic Arab Sunni states as much as they do Israel, as recent normalization treaties with Gulf States illustrate.

Ultimately, Iran’s vision is to surround Israel with “fire bases” on multiple sides that can threaten the Israeli home front and strategic targets in Israel with large quantities of surface-to-surface firepower. The fire bases are surrounded by “layers” of defense in the form of rings of enemy operatives that use human shielding tactics in built-up areas to downgrade the IDF’s capabilities. These operatives are fortified in bunkers, tunnels and civilian neighborhoods with the object of hindering an IDF ground offensive and undermining Israeli air power.

Placing the Israeli home front under this level of threat is ultimately designed to break the morale of the Israeli people. Iran’s ambition is to have Israeli cities under permanent threat of attack by arsenals of rockets and missiles, together with the emerging threat of Iran’s nuclear program. The Tehran regime hopes that this combination of threats will cause Israelis to doubt that a safe life is sustainable in their homeland.

Critical to neutralizing this ambition is a well-adapted Israeli military that can deter adversaries and create long periods free from conflict. This would enable the national economy to prosper and spare the Israeli people frequent disruptions caused by wars and rocket attacks on cities. When wars do erupt, and when Israeli deterrence fails to prevent large-scale armed conflict, the IDF must be able to utilize its qualitative edge over Israel’s enemies. That edge must be large enough to allow it to decisively and rapidly achieve victory, in contrast to the results of previous conflicts over the past 15 years.

Momentum is the product of a recognition that Iran, Hezbollah, Hamas and others have been collectively reducing the qualitative gap with Israel. This means that freezing the development of the IDF’s capabilities is not an option, even under conditions of a health and economic emergency.

Momentum’s quest is to create an integrated, network-centered military in which the branches act in synergy, and which shortens the sensor-to-shooter loop down to a matter of seconds. The IDF has begun implementing the sections of the Momentum plan that it can advance without extra funding. These efforts will always be insufficient when compared to the scope of changes that Momentum envisages, but the determination of the IDF General Staff to push forward without waiting for a new budget is wise and forward-looking.

Momentum has identified three core components that are essential to the widening of the qualitative gap over Israel’s adversaries. The first is a multi-domain ground maneuver capability in which IDF ground forces operate on the surface, underground, in the air, in the cyber arena and in the electromagnetic spectrum simultaneously. The second is a significant upgrade of Israel’s aerial firepower capabilities (including long-range strike capabilities). The third centers on fortifying defenses for the home front.

In recent months, signs have emerged that the IDF is moving forward on at least some of these plans, though to a far lesser extent than what it had envisioned.

One indication of where the IDF would like its ground forces to be in a decade’s time could be seen in the summer of 2019, when the Defense Ministry and Israel’s three largest defense companies, Israel Aerospace Industries, Rafael and Elbit, provided a glimpse into their prototypes of the Carmel future combat vehicle.

The platforms being developed by the defense companies use an array of sensors to detect hidden enemy cells, drive autonomously through the battlefield, receive approval for strikes on threats and share target information with other vehicles and the whole of the IDF’s digital network in the relevant sector.

Such platforms would play central roles in a land offensive in a future war in which Israel would need to punch through the defense rings that surround the “fire bases” and quickly extinguish projectile fire on Israeli cities.

Powered by artificial intelligence, Carmel vehicles will plan their own routes, detect and blow up roadside bombs, automatically detect and prioritize targets (including the use of radar and advanced electro-optical sensors to spot enemy cells hiding in buildings), and advise on-board personnel on the right weapons systems to use in each case. This reduces the number of needed on-board personnel from four to two, leaving much of the mission to be handled by the vehicle’s artificial intelligence computer system. The result will be a vehicle that can locate and destroy targets with unprecedented speed and accuracy.

Carmel vehicles will deploy their own drones and ground unmanned vehicles, sending them ahead to gather information on enemy activities and attack targets.

The project has attracted the interest of other militaries. Once the vehicles complete development and enter into serial production, they will constitute a revolution in ground maneuvering capabilities.

Another innovation that illustrates the type of networked combat capabilities the IDF is moving towards is the Fire Weaver sensor-to-shooter system, produced by Rafael, which has been working with the IDF to develop it.

Fire Weaver creates a joint augmented reality picture in which visual symbols are imposed over real-life images of surroundings. It is accessible to all friendly forces and ensures that they are all looking at the same targets.

An enemy anti-tank cell taking cover in a residential apartment building can be flagged and marked out to all relevant forces using this system, which then automatically assigns the target to the most suitable platform or the shooter in the best situation to engage.

An early tangible result of Momentum came in July, when the IDF announced the completion of the first exercise by its new Multi-Dimensional Unit, established in 2019. The unit expresses the objective of creating a cross-forces organic force, combining elite infantry, armored units, C4I units, intelligence and air force personnel, as well as the elite engineering Yahalom Unit, and reconnaissance unit members from the Golani infantry brigade.

The air force, meanwhile, has fast-tracked a number of planned reorganization processes drawn up by IAF Headquarters that are designed to optimize operations and make more efficient use of resources.

The changes center on focusing similar types of units into bases and forming national expertise centers around specific capabilities.

Under these changes, the IAF created a new base for all its special forces, including the 669 combat search and extraction unit, the Shaldag commando unit and others. The new 7th Wing is designed to act as a complementary component to the IAF’s activities in the depth of adversary territory during both routine times and emergencies, according to the IDF.

The Ramat David airbase in northern Israel will act as a focused F-16 jet center, while Hatzor airbase in central Israel will become the center of the IAF’s intelligence-gathering drone activities. The IAF’s drone array today conducts 75 percent of the air force’s flight hours, indicating how central it has become to daily operations.

Meanwhile, the formation of a second F-35 squadron at Nevatim airbase in the south represents a landmark in the IAF’s transition to fifth-generation stealth platforms. These platforms are capable of gathering, fusing and sharing vast quantities of intelligence, and of striking ground and airborne targets, before being detected.

These changes are occurring as the air force continues to build up its capability to accurately strike thousands of enemy targets per 24 hours during a full-scale conflict.

Still, none of the above are adequate substitutes for the scope of changes that the IDF will need to implement in the coming years, for which an adequate defense budget—and commitment to the Momentum program—are essential.

Yaakov Lappin is a Research Associate at the Begin-Sadat Center for Strategic Studies and a military and strategic affairs correspondent. He conducts research and analysis for defense think tanks and is the military correspondent for JNS. His book “The Virtual Caliphate” explores the online jihadist presence.

Caption: Israeli soldiers participate in a drill simulating a terrorist infiltration into a school in Gush Etzion, on Aug. 19, 2020.
Photo by Gershon Elinson/Flash90.