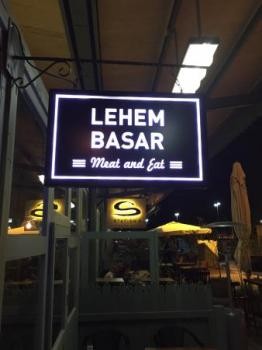 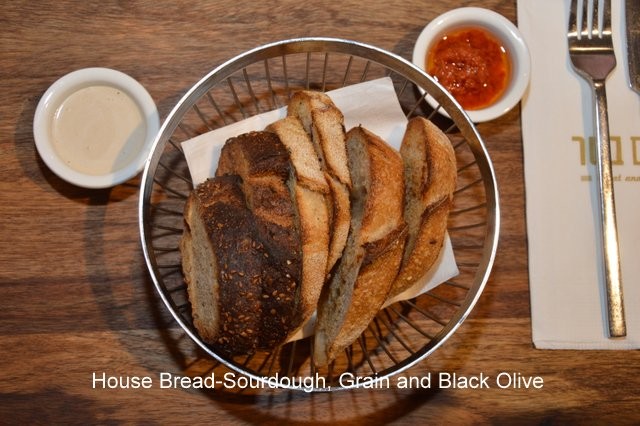 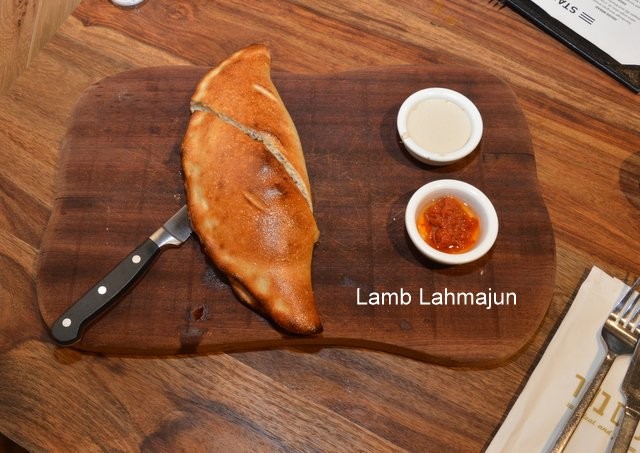 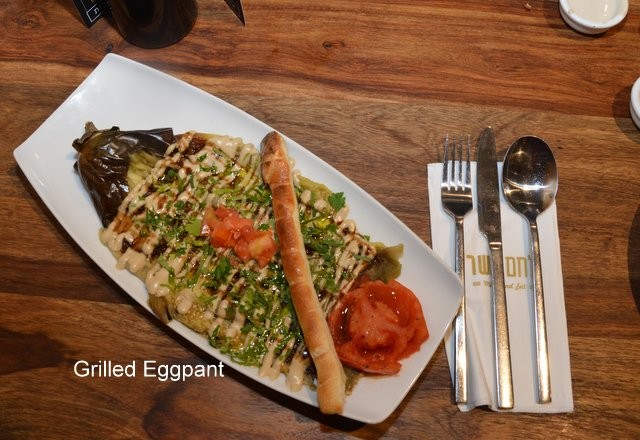 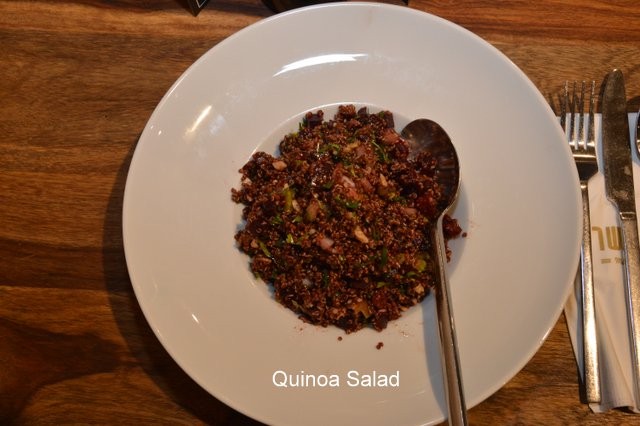 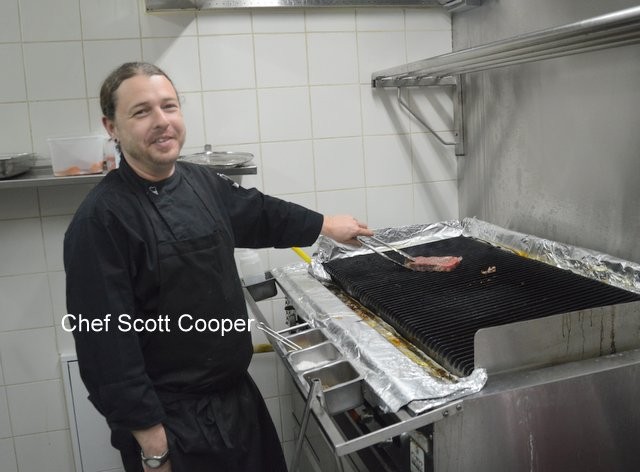 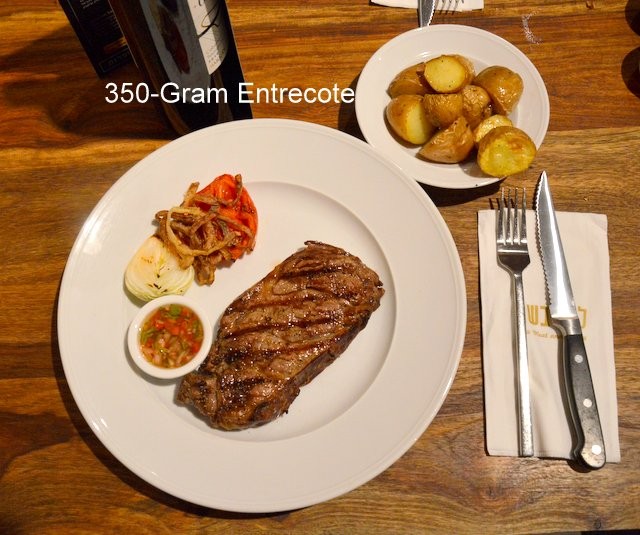 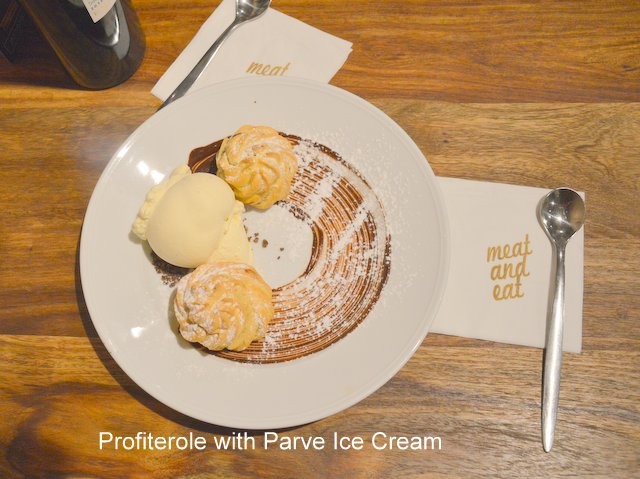 02-624-4808 http://lehembasar-jerusalem.co.il/
David Remez St. 4
Meat and Eat is part of a chain, whose Jerusalem franchise is owned by Rami Ran and Ben Ashkenazi. The Jerusalem restaurant opened during Sukkot 2014.
Our host, the manager, Kfir Edri, came on as manager in January, having owned the Buffalo Steak House on Emek Refaim and a catering company.
After walking through the patio with wood tables to seat 18, one can walk down a ramp (making it handicapped accessible) to a glassed-in room which seats 36 at wood tables or go up two steps into an area and take a peek into the glassed-in kitchen.  Opposite the kitchen are seats for 10 at tables and the bar with stools for 6. A low wall with lit candles separates the room with a most interesting wall where wine bottles are place on diagonal shelves, and there are seats for 35. The back room could provide a venue for a private party and seats 28. The rest rooms and washing station are all on this level, also on one side of this back room.
Chef Scott Cooper, a charming, single, 37-year-old, is originally from Denver and then Orlando. He made aliyah in 1999, after having grown up Chabad, although he had been coming to Israel off and on since the age of 12. Arriving with a three-year degree in hotel management and marketing and as a chef from the Culinary Institute in Miami,  he began working in various Tel Aviv restaurants such as Carni Bar, Boya and "Norma Jean," the largest whiskey bar in Israel.
Feeling he needed a change and wanting to return to Jerusalem, he was hired by Meat and Eat and became chef in January.
Although the menu is fairly uniform at the restaurants, Chef Cooper says, "each chef has an open hand to do specials, which change every few days, including soups, which are constantly evolving."    There will be a new menu for summer after Passover although the restaurant will open for Passover with Passover menu.
On a busy night, Chef Cooper remarks that this Meat and Eat can "put out 300 meals in two to three hours." They try to accommodate customers as much as possible and can do gluten-free food, dishes for those allergic to nuts and those for vegetarians, although they are primarily known as a meat restaurant.
There are 10 starters ranging in price from  NIS 16 to NIS 64. Chef Cooper started us off with the house bread which is served two slices per person either sour dough, grains or black olive, accompanied by virgin olive oil, tomato, hot pepper dip and Atlantic sea salt (for NIS 16). It comes to the restaurant half cooked where it is defrosted and finished in the special taboon. Ours was crusty and toasted.
The next starter we were served was the Lamb Lahmajun (NIS 42), a delicious, crescent-shaped pastry filled with a distinct mix of minced lamb, root vegetables, and kalamata olives--all providing a delicate tasting; roasted peppers and tahini dips were on the side.
Another starter tasted was the Grilled Eggplant (NIS 58) with oregano, roasted tomatoes, tahini, pomegranate sauce and extra virgin olive oil, garnished with coriander. We found this to be a superb way to serve eggplant. Chef Cooper calls it "very sexy"!
The last starter was Quinoa Salad (NIS 49), a unique blending of organic red quinoa, beets, hazelnuts, cranberries, red onion, and herbs with a very subtle pomegranate dressing. The dominant taste of the salad, for this beet lover, was the beets.
There are 8 main courses, each served with your choice of a side dish.  Fish, chicken, hamburger and lamb range from NIS 76 to NIS 128 The three steaks (sirloin, entrecote and filet mignon) range from 200-450 grams and are NIS 138-NIS 179.
Being a food writer, this journalist was fascinated by the fact that the meat comes from calves which are born in Australia and grow up in Ramat Hagolan. The chef works only with fresh meat, and all cuts are hand chosen by him.
It takes a lot of courage to serve a steak to an American journalist and photographer when you learn they are from "steak country." But sharing the medium rare, 350- gram entrecote (NIS 159), which was the chef's choice for us to try, was an unforgettable, excellent piece of meat, done to perfection. It was accompanied by roasted tomato, roast potatoes and sweet, slivered roasted onions and a chimichuri sauce. Whereas chimichuri is generally made of Italian parsley, garlic, olive oil, red wine vinegar, and always served on grilled meat in Argentina as a green sauce, here it was not the least bit spicy, red in color and a lovely accompaniment to the steak.
There is a separate wine menu, but on the regular menu are soft drinks, hot drinks, and 2 dessert wines. On each table is a bottle of the wine of the month, available by the glass, carafe, or bottle.
After a wonderful steak, it was difficult to decide which of the 8 desserts (NIS 42) to share, but the chef and we chose the profiterole. This is really French cream puffs, served warm, with a rich, thick, chocolate fondant (pudding) filling, beautifully presented, next to a pareve, vanilla ice cream ball.
We were also told that three choices of business lunch are available (NIS79, 99, 119), Sunday through Thursday from 12 noon to 5 p.m.
There seemed to be a large number of wait staff and all those with whom we spoke were knowledgeable and friendly and were serving the people around us very quickly.
If you are looking for a high end, extraordinary dining experience and want truly exceptional meat, look no more. Meat and Eat will fill the bill.
The author and photographer were guests of the restaurant
Share: