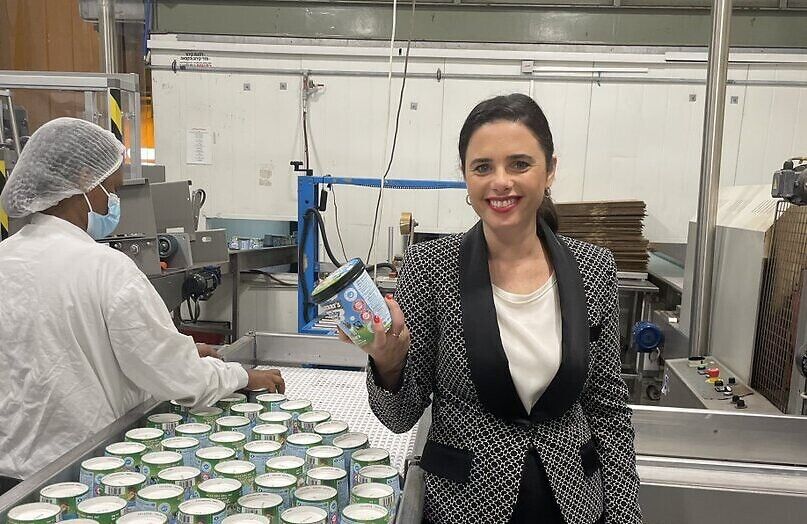 The interior minister urges consumers not to boycott the Israel franchisee and says the government is working to overturn the parent company’s “anti-Semitic” decision to halt sales in certain areas.

Israeli Interior Minister Ayelet Shaked on Wednesday visited the Ben & Jerry’s factory in Israel in a show of support of its CEO, Avi Zinger, who is fighting the parent company’s recent decision to halt sales in Judea and Samaria.

“It’s not the Israeli Ben & Jerry’s that needs to be boycotted,” she said. “On the contrary, we need to buy Ben & Jerry’s Israel.”

“The CEO of Ben & Jerry’s Israel has been fighting tooth and nail for years against BDS organizations. He refuses to accept the terms of the [parent company] to boycott parts of Israel, and we will do what needs to be done to overturn their decision,” she said.

During the factory visit, Shaked said that the government was working with Jewish groups, evangelical communities and Israel supporters in the United States to boycott the ice-cream brand there until it reverses its decision.

“The board of directors of Ben & Jerry’s chose to pander to terror and anti-Semitic groups, instead of being loyal to the Israeli franchisee, which for many years has been an exemplary Israeli manufacturer. The Israeli government will do what it can on the legal, consumer and diplomatic levels against the American manufacturer, in order to change this decision,” Shaked continued.

“I call on Israeli citizens to keep buying Ben & Jerry’s Israel. This factory employs 160 workers and many dairy farms in the area. We have a year-and-a-half to change this anti-Semitic decision,” she concluded.

Israeli Prime Minister Naftali Bennett slammed Ben & Jerry’s decision, tweeting on Monday: “There are many ice cream brands, but only one Jewish state. Ben & Jerry’s decided to brand itself as the anti-Israel ice cream. This decision is morally wrong and I believe that it will become clear that it is also commercially wrong. The boycott against Israel—a democracy surrounded by islands of terrorism—reflects a total loss of way. The boycott does not work and will not work, and we will fight it with full force.”

The company’s Israeli franchise holder said in a statement that “Ben & Jerry’s decided not to renew the agreement with us in 18 months’ time because of our refusal to stop selling the product across Israel. We call on the government and on consumers not to allow a boycott of Israel. This is an unprecedented action on the part of Unilever, the owner of Ben & Jerry’s Inc. Ice cream is not part of politics. We call on Israelis to continue buying the local product, which provides a livelihood to hundreds of workers in the south.”

Avi Kendler, the company’s vice president, said that the Israeli franchisee “has no intention of breaking the law by boycotting parts of the country. State officials have been apprised of the situation, and I hope they can change Ben & Jerry’s decision.”