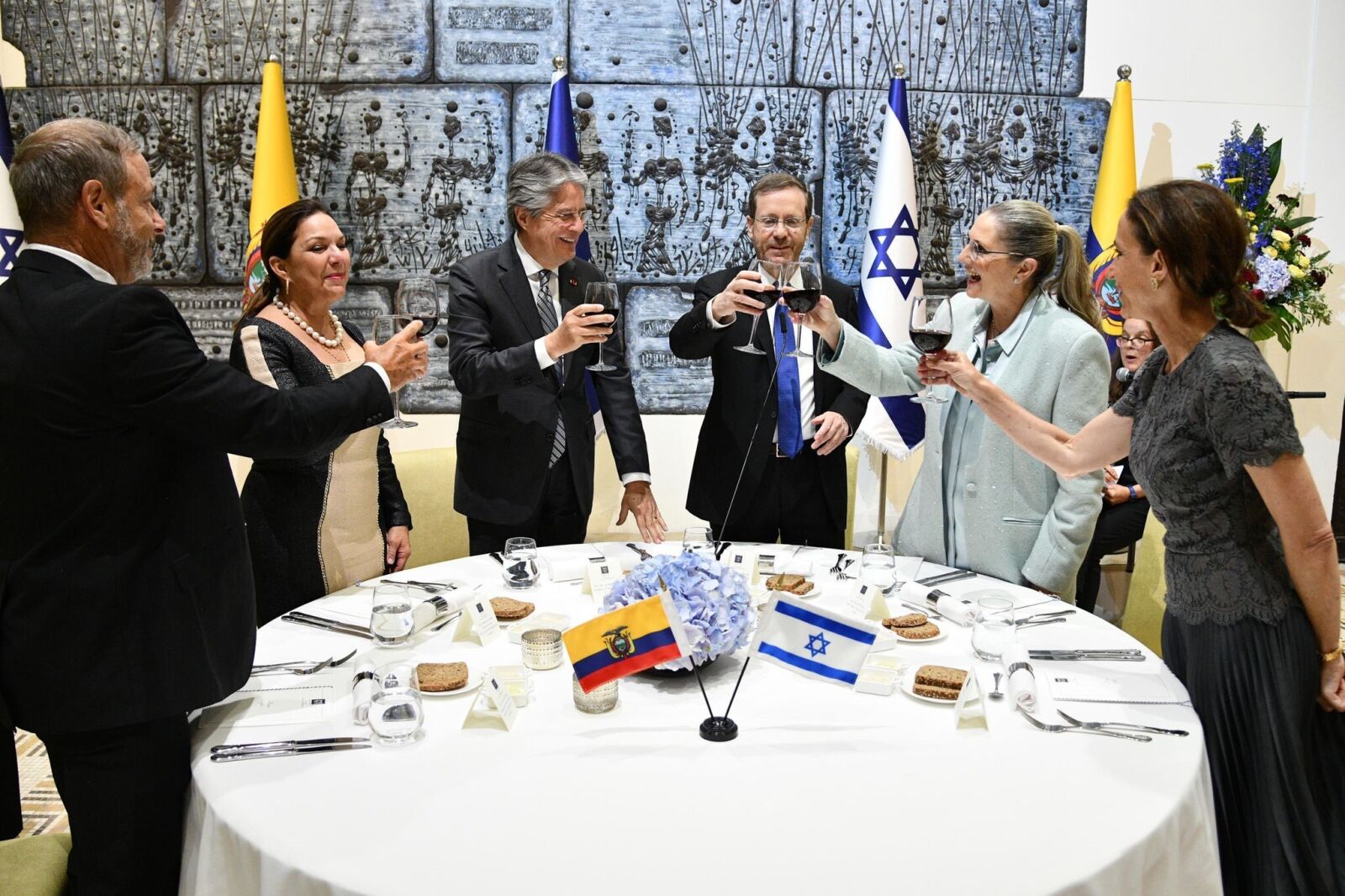 The 100-strong delegation accompanying President Guillermo Lasso aims to strengthen bilateral ties, especially in the fields of security and technology.

Ecuador’s President Guillermo Lasso kicked off an official state visit to Israel on Wednesday, the first-ever by an Ecuadorian president to Israel. Accompanying Lasso is a 100-person delegation with the mission of strengthening bilateral ties, specifically in the fields of security and technology. During the trip, Ecuador will inaugurate an Innovation and Commercial Representative Office in Jerusalem to bolster commerce between the two countries.

Israeli President Isaac Herzog and first lady Michal Herzog greeted Lasso and his wife, first lady María de Lourdes Alcívar, at the President’s Residence in Jerusalem. Both national anthems were played, Herzog and Lasso reviewed an IDF honor guard and then sat down for the first diplomatic working meeting of the trip.

“For me, my wife and my delegation, it is a great honor to be here in Israel, a country that I have always particularly admired,” Lasso told the press on Wednesday. “I admire the Israeli fighting spirit, Israel’s great dignity and its development. In 74 years, with half of Ecuador’s population, you have reached an economy four times the size of Ecuador’s.”

Lasso, a center-right politician who took office in May 2021, has signaled keen interest in developing Ecuador’s tech sector, which was neglected by past governments. He views Israel, the startup nation, as a natural partner. Last year, in a speech before Ecuador’s Alliance for Entrepreneurship (AEI), Lasso announced his intention to visit Israel to gain insight into its innovation prowess and to bring that know-how back to Ecuador.

AEI Director Andres Zurita, in Israel as part of the delegation, said Ecuador has a high propensity for entrepreneurship, but “a very low rate of innovation.” With the right models, Ecuador could make the necessary leap, he said.

On Tuesday, the day of Lasso’s arrival, Ecuador held a one-of-a-kind “Ecuador Open for Business” conference, in this case, a private executive lunch with 10 top Israeli businessmen. Normally, “Ecuador Open for Business,” a kind of traveling conference to encourage investment in the country, involves much larger groups. The more intimate setting was an indication of a more targeted approach where Israel is concerned.

Israel has opened its doors to Ecuador’s delegation, arranging visits to tech hubs, academic institutions like the Weizmann Institute of Science, as well as meetings with key government ministers. Herzog said on Wednesday, “We are world leaders in technology, agriculture, science, R&D and healthcare, and we will be happy to collaborate with Ecuador in all these important fields.”

Elias Levy, a journalist who lives in Ecuador and has followed Ecuadorian-Israeli relations for 30 years, told JNS that “for the first time in several decades bilateral relations have a huge opportunity to develop into something completely new for both countries with a new horizon founded in commerce, economic issues and innovation.”

Levy noted that Lasso is reviving a relationship that went into a tailspin under Ecuadorian President Rafael Correa (2010-2017). A leftist, Correa aligned himself with such countries as Venezuela and Cuba. Although Correa personally admired Israel, and even intended to visit in 2014, he canceled the trip in protest against that year’s Gaza war. Known in Israel as “Operation Protective Edge,” it was ignited by the kidnapping and murder of three Israeli teenagers by Hamas terrorists.

Correa’s successor, Lenin Moreno, although a former ally of Correa, began to reverse the latter’s policy towards Israel. That effort has now taken a leap forward with Lasso’s visit. Nonetheless, Ecuador’s president has many obstacles to overcome, given that he also hopes to attract Israeli investors to his country. Correa fostered an anti-business environment that drove foreign companies away, and while Lasso is working to overturn those policies in the legislature, he has so far enjoyed only partial success.

Ecuador also faces a major illicit drug crisis. In October, Lasso declared a state of emergency as drug violence spiraled out of control. Sandwiched between Colombia and Peru, the world’s No. 1 and No. 2 cocaine producers, Ecuador has become a conduit for transporting drugs to U.S. and European markets. This has come about partly due to Ecuador dollarizing its economy, making it ideal for money laundering, and also to successful pressure on Colombian and Peruvian drug operators, making it difficult for them to ship drugs from their own countries.

Lasso hopes Israel, with its vast security experience, will help here as well. Noteworthy is that he put security matters first when announcing the three main objectives of his trip.

For Israel’s part, it’s happy to see the return of an old friendship, especially on a continent which is undergoing a populist resurgence. Ecuador was one of 33 countries that voted in favor of the establishment of the State of Israel in 1947. Israel will likely expect that once friendly face at the U.N. to again shine on its behalf at that world body.