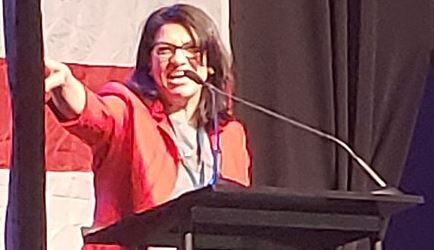 Israel’s envoy to the U.S. condemned Rashida Tlaib’s (D-MI) haste to blame Israel for the death of a Palestinian journalist during a firefight between IDF forces and terrorists in Jenin Wednesday.

“One would expect a member of Congress to support our call for an impartial joint Israeli-Palestinian investigation of this tragic event rather than rushing to a biased conclusion. Acting as the judge, jury and executioner undermines the causes of justice and peace,” Ambassador Michael Herzog tweeted.

“When will the world and those who stand by Apartheid Israel that continues to murder, torture and commit war crimes finally say: “Enough”?” Tlaib had tweeted earlier in the day. “Shireen Abu Akleh was murdered by a government that receives unconditional funding by our country with zero accountability.”

Herzog also provided some background to the incident that Tlaib did not include in her criticism.

“Let’s put things in context,” he wrote. “In the past few weeks, three major deadly terror attacks in the heart of Israel were planned, orchestrated and carried out from Jenin. The IDF went there to thwart another act of terror and was attacked by heavily armed ‘Islamic Jihad’ terrorists.”

Tlaib aired her charges even as Palestinian Authority Forensic Medicine Institute Director Dr. Rayyan Al Ali said after the preliminary autopsy that “it cannot be determined whether [Aqleh] was killed by Israeli fire or by a Palestinian bullet.”

The IDF has flatly rejected the claim of fellow journalist Ali Samoodi, who was wounded in the same incident, that “there were no resistance fighters” in the area where he and Akleh stood and that the IDF had “killed her in cold blood.”

Central Command head Maj. Gen. Yehuda Fuchs told Channel 12 that “Shireen was really close to troops and Palestinian militants” when she was hit during an arrest operation in which “thousands of bullets” were fired.

Most of the shooting came from the terrorists, Chief of Staff Lt. Gen. Aviv Kochavi noted. Dozens of Palestinians “fired extensively at our forces, firing wildly and indiscriminately in every direction,” while the IDF forces “carried out professional and selective firing,” he said.

According to Defense Minister Benny Gantz, the IDF’s preliminary investigation “indicates that no gunfire was directed at the journalist,” but that it also “cannot determine which gunfire hit Shireen.”

He called for “full cooperation from the Palestinians because without the pathological findings and the forensic findings it will be very hard to understand what happened.”

The PA has so far rejected Israel’s offer to conduct a joint probe into Akleh’s death and have refused to reveal the bullet found in her body, saying that it will instead refer the issue to the International Criminal Court.

At a meeting of the Knesset Law Committee Wednesday, Justice Minister Gidon Saar reacted to the PA’s veto by saying, “One has to wonder why. I think they refused because they have no interest in revealing the truth.”