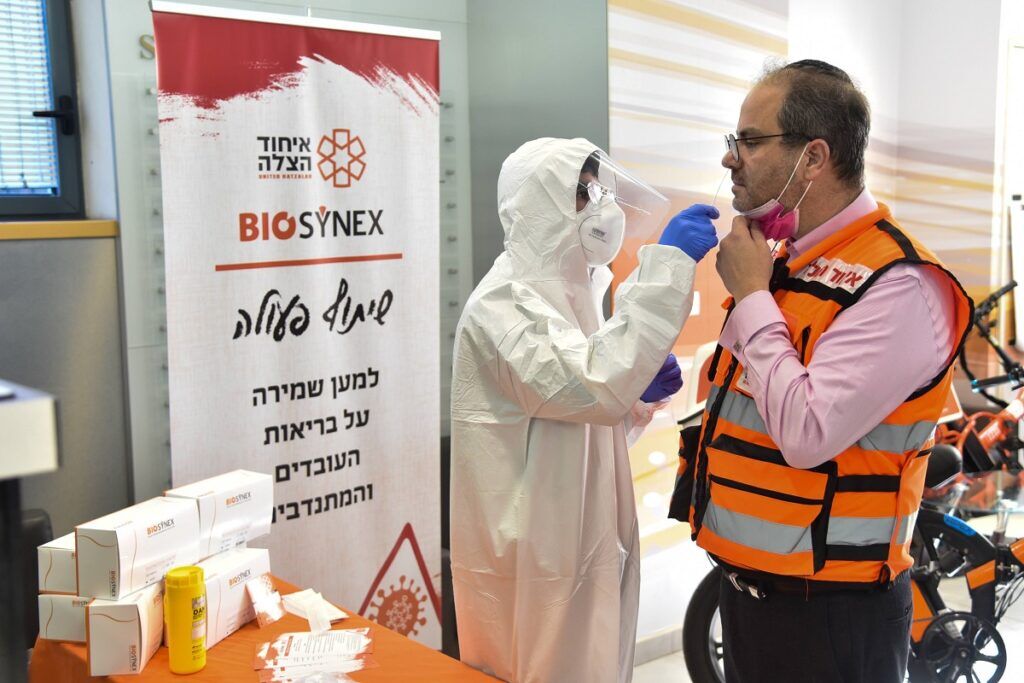 The kits consist of an antibody detection test (also known as a serological test), performed on blood extracted from a finger prick, and an antigen detection test, performed via a nasal swab. The antibody test determines the presence of COVID-19 antibodies; the antigen test detects fragments of proteins of SARS-CoV-2, the virus that causes COVID-19. Both tests have been proven effective, with sensitivity and specificity of well over 90 percent, and results are obtained in approximately 15 minutes.

Nanosynex founders Michelle Heyman, CMO, and Diane Abensur Bessin, CEO, tell NoCamels they wanted to do their part to help Israel fight the global health crisis by making rapid COVID-19 diagnostic tests available for use by United Hatzalah. Heymann, originally from Brazil, and Abensur, from France, say they used their strategic partnerships and business connections in the biotech industry to bring these innovative rapid COVID-19 testing kits to the country they call home.

“With this whole pandemic, we realized that we needed to take action and help our country to combat this [crisis],” Heymann tells NoCamels.

The CE marked kits are provided by French company Biosynex, and are currently pending the approval of Israel’s drug and medical equipment regulator.

On Thursday, Nanosynex held a pilot demonstration and training session for UH’s emergency medical personnel, team leaders, and first responders, in the organization’s headquarters in Jerusalem.

Alongside vaccination drives, rapid testing has been a fundamental part of countries’ efforts to control the outbreak of the virus and adopt strategies to curb the spread. With the identification of new, more infectious variants of the virus, such as those from the UK, South Africa, and the Brazilian variant, some states are harnessing rapid testing to open up parts of their economies.

While Israeli authorities, companies, and universities have been working for months to develop rapid COVID-19 testing technologies, none have been widely adopted yet.

United Hatzalah will start with about 200 kits coordinated through Nanosynex and will assess expanding the pilot further, pending approval from the Israeli health authorities.

“Our volunteers are on the front lines of the fight against the COVID-19 pandemic,” said United Hatzalah President and Founder Eli Beer in a statement. “In addition to treating more than 2,000 people per day for any medical emergency, our volunteers are transporting 200 COVID-19 patients per day. I want to make sure that when our volunteers rush out to treat someone or need to transport a patient, they are COVID free and that they come back from the incident COVID free.”

Nanosynex itself is focused on developing a diagnostic solution for bacteria that is resistant to antibiotics so that physicians can target personalized antibiotic prescriptions to patients for a better health outcome. Heymann and Abensur founded Nanosynex in 2017 after meeting as students at the Technion – Israel Institute of Technology out of a “mutual interest and passion for healthcare and innovation,” they tell NoCamels.

Based at the Weizmann Science Park, Nanosynex’s team of 10 people includes Professor Shulamit Levenberg, the award-winning tissue engineering expert and dean of the Technion’s Biomedical Engineering Faculty, who serves as the startup’s chief scientific adviser. Nanosynex’s tech is based on research discoveries in Professor Levenberg’s lab.

Last year, Heymann and Abensur Bessin were named to Forbes Israel’s Under 30 list for 2020.

Abensur Bessin says that as the pandemic raged on in Israel – which is in the midst of its third national lockdown and a mass vaccination campaign – the two sat down with their team to brainstorm ways to help. Rather than take away from their focus to develop Nanosynex’s same-day Antimicrobial Susceptibility Test (AST), they decided to “leverage our business partners and came up with this possibility of…making these diagnostics tests available in Israel.”

She explains that such rapid tests can be used for mass screening of people in schools, airports, public places, workplaces, and so on, as countries look toward a gradual, safe return to a sense of normalcy. The antigen tests, in particular, are already widely used in Europe and other regions. They are similar to PCR tests but much more rapid and extensive, and the sensitivity is comparable, Abensur Bessin says.

The Nanosynex founders indicate that they were impressed with United Hatzalah’s impact during the pandemic and wanted to help the organization meet its goals while raising awareness about rapid testing.

United Hatzalah’s mission is “really tied to the Health Ministry’s mission,” says Heymann, and the founders hope this case study and the demonstration of the technology will pave a path toward the commercialization of the kits.

“The widespread application of a rapid test will allow for mass screenings in a format that is less expensive, easy to use, without the use of laboratories, and will allow businesses and offices to reopen,” Abensur Bessin said in the UH statement.

Nanosynex, meanwhile, has been working for over three years to develop a solution that will be highly useful in pandemics, Abensur tells NoCamels.

“Today, patients with suspected bacterial infections receive antibiotic treatments,” she explains, and if there is resistance it can lead to major problems because “not only is the patient not cured but [the infection] can spread and infect more people.”

Antimicrobial resistance has been identified as a global health and development threat by the World Health Organization. Drug-resistant pathogens and the rapid spread of multi- and pan-resistant bacteria, also known as superbugs, have been alarming health authorities who are warning that drug-resistant diseases could cause 10 million deaths each year by 2050 if urgent action is not taken.

Already, drug-resistant infections – exacerbated by antibiotic overuse in humans and livestock – are killing some 700,000 people a year, according to a 2019 UN report.

“One of the ways to stop the spread of resistant bacteria is to avoid the post-antibiotic era in which we are headed,” Abensur Bessin says.

“We need to better use antibiotics. Our goal is to combat the misuse and overuse of antibiotics by prevention,” adds Heymann.

Nanosynex, they say, is looking to provide a faster and more accurate solution to determine what is the most appropriate antibiotic treatment for a patient. And rapid diagnostics and screening is “part of an overall treatment plan and that’s one of the points that we want to highlight,” Heymann tells NoCamels.

Nanosynex’s platform is in prototype stage and currently being validated.