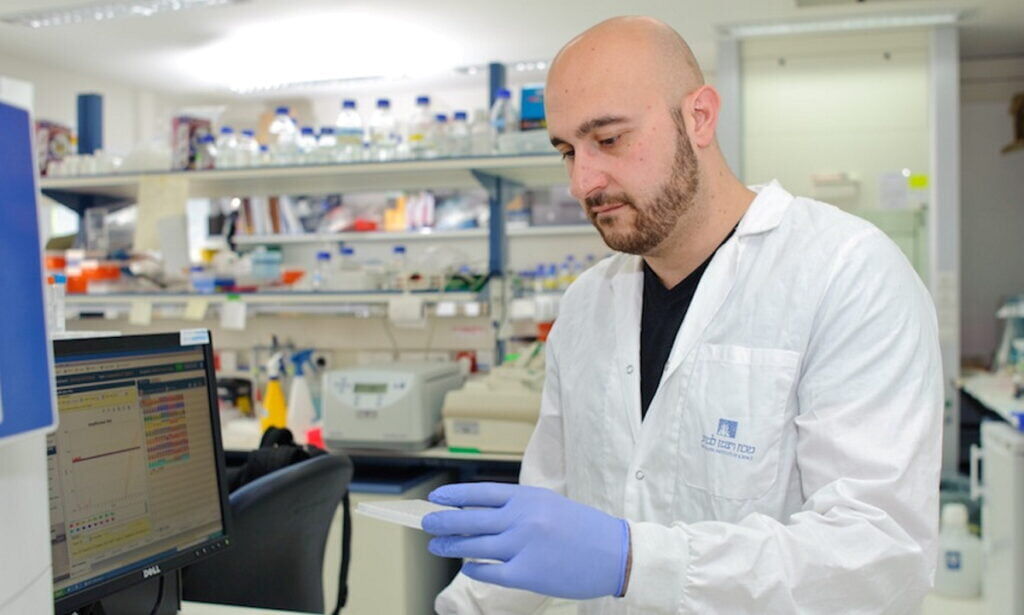 Breakthrough is first step towards growing human organs and tissue in the lab.

Scientists in Israel have, for the first time, created a mouse embryo without an egg, sperm or a womb, in a move that could herald an era of lab-grown human organs.

They used only skin cells to produce a number of mouse embryos, which kept growing for 40 per cent of their gestation period.

The goal was not to reproduce a living mouse, but to produce a synthetic embryo as a first and significant step towards growing human tissue and organs in the laboratory.

The breakthrough, at the Weizmann Institute of Science, in Rehovot, opens the door to the real possibility of custom-grown “spare parts” in the near future, Professor Jacob Hanna, who led the research team, tells NoCamels.

The mice were grown from stem cells in a specially developed incubator and they survived for over eight days, out of the full-term gestation period of 20 days. They had a beating heart, blood stem cell circulation, a brain, a neural tube and an intestinal tract.

“Let’s imagine I’m a patient, and I need a bone marrow transplantation or some liver cells to transplant,” says Prof Hanna, of Weizmann’s Molecular Genetics Department.

“Some time in the future you’ll be able to take just a biopsy from my skin to make the stem cells. We then put them in this device, which we have already developed, and let them grow for 20 days, where they reach a stage we can try to take blood stem cells, or liver cells.

“And these will be genetically identical to me. There is no need to find a donor, there will be no rejection, and we can transplant them.” How far in the future is this? “Maybe five years, three years even,” he says.

Prof Hanna has co-founded a biotechnology startup, Renewal Bio, which will use the knowledge acquired so far to drive advancements in infertility, blood system renewal, and longevity.

Theoretically it may be able to take skin cells from a woman with fertility problems, create stem cells from them, then grow synthetic embryos to produce eggs.

It has taken Prof Hanna and his team 10 years to get to where they are today. The first step was to grow a natural embryo – from an egg and sperm – outside the womb. They achieved that last year, using a special incubator they developed, as reported in Nature.

“The embryo is the best organ-making machine and the best 3D bioprinter – we tried to emulate what it does,” said Prof Hanna.

The team has now managed to grow a synthetic embryo as well, under the same conditions, and has just published its findings in the journal Cell. It has shown that all the information needed to produce a living animal is encoded in its cells, not just in the egg or sperm.

Researchers built on two previous advances made at Prof Hanna’s lab. The first was the ability to reprogram stem cells – the building blocks of the human body.

Returning them to what scientists call their naïve state provides the raw ingredients to make something different and useful. So a skin cell could be stripped of its skin qualities and reprogrammed to become any other sort of cell.

The second advance was to build a growing environment where these cells could thrive. After many years of trial and error they created their incubator device that mimics the womb.

They then combined both these achievements to grow a synthetic embryo from naïve mouse stem cells, dispensing entirely with the need for a fertilized egg.

“The incubator has the embryos in glass bottles on a wheel that is spinning,” says Prof Hanna. “The embryos are swimming inside fluid that has all the nutrients needed to support adequate development.”

The vast majority of the 10,000 cells they attempted to grow were not successful. But around 50 developed into embryo-like structures. They had a “95 per cent similarity” to natural mouse embryos in terms of genetics and the shape of their internal structures, and their organs gave every indication of being functional.

Even before any of this technology is adapted for direct use on humans, it provides huge benefits. Certain experiments involving mice are currently unfeasible because they would require thousands of embryos. Prof Hanna’s team is, technically, able to produce mouse embryos by the million.

Caption: Prof Jacob Hanna in his lab at the Weizmann Institute.
Credit: Courtesy.

Must sell now! your Home in Ramot Bet -Jerusalem