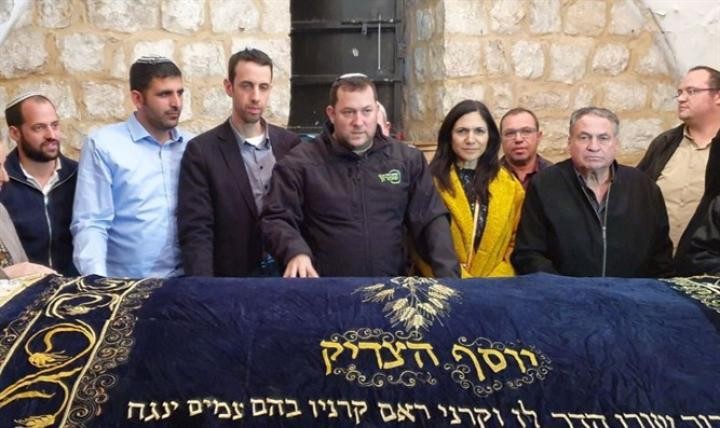 Rachel's Tomb, Tomb of Patriarchs and Joseph's Tomb may be left out of sovereignty map. Dagan: 'We can't abandon our holy places.' It appears as if Joseph's Tomb, the Tomb of the Patriarchs, and Rachel's Tomb—holy places which generations of Jews dreamed of seeing with their own eyes one day, may end up beyond Israeli sovereignty.

Samaria Regional Council Head Yossi Dagan said it was a mistake Jews around the world would never forgive. "It's something we can't—and won't accept," he proclaimed.

"The holiest places in the Jewish faith can't be abandoned by a right-wing government or any Israeli government for that matter. This is a rejection of the most fundamental principles of the Jewish people's return to their homeland. Rachel's Tomb, Joseph's Tomb and the Tomb of the Patriarchs will not be abandoned."

Dagan said the current outline presented a problem for all of the settlement blocs. "The truth must come out: If Netanyahu draws a map that leaves out Elon Moreh, he is, in fact, giving up on Elon Moreh. When you have 19 isolated settlements, it looks like a second disengagement," he asserted.

Dagan mentioned 19 settlements that, according to information obtained by heads of the Yesha Council, will be secluded within PA-controlled territory following the application of sovereignty, including Itamar, Yitzhar, Elon Moreh, Har Bracha, Mevo Dotan, and Homesh.

Dagan also stated that leaving those settlements isolated endangers both the lives of local residents and Israel's capacity to defend herself, as most of these communities are situated on high ground overlooking the coastal plain.

"Not only would this be a second disengagement," said Dagan, "but it would also bear the same consequences. Only this time, the missiles will fall on Tel Aviv instead of the South, and Israel will no longer be able to defend her borders. Such a move would be irresponsible and I expect the Prime Minister to reject it outright and not allow the State's most vital interests to be harmed."

For the past three weeks, the Samaria Regional Council has been leading a campaign to apply sovereignty without establishing a terrorist state and creating isolated settlement blocs. According to Dagan, "Sovereignty can be applied even without the agreement of the United States. Trump may condemn us but he won't harm our interests because he is a friend of Israel and friends need to understand that sometimes disagreements arise. Certainly at a time like this, six months prior to elections and with his support base dominated by Evangelicals, [he will allow it to take place]."

CompuTip - Wallpaper of the Week N-305

Breath better and Live longer with a home Air Purifier

CompuTip - Wallpaper of the Week J-305