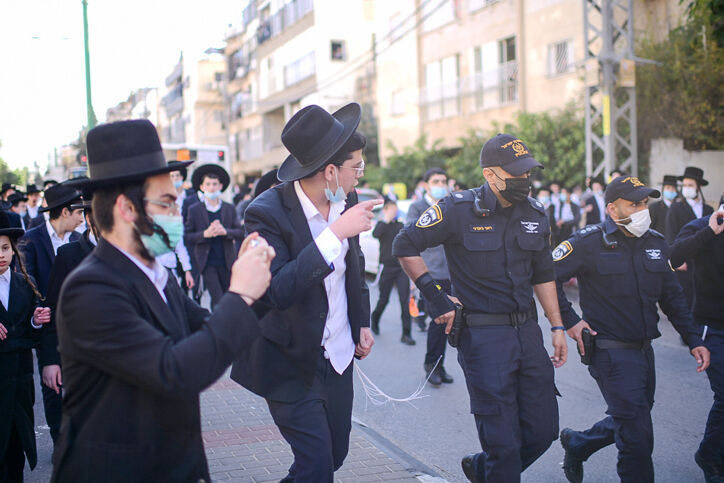 After weeks of being implored to “stick it to the haredim,” the police finally gave in to the media’s not-so-subtle demands, bringing the country the closest it's ever been to a civil war.

The night of Jan. 21 will be etched into our collective memory as one of the lowest points in haredi-Israeli relations, and the closest we have ever gotten to (still thankfully very far from) a civil war.

From the conduct and startling anti-Jewish onslaught of a group of radical haredim to the response from the police, which opted for a kind of collective punishment aimed at teaching all of Bnei Brak’s residents a lesson, the clash put an abrupt end to a very delicate and special moment in which we suddenly saw a rare wave of reckoning and internal criticism within haredi society.

This wave was shattered with the sound of the stun grenades in the heart of Bnei Brak that saw moderate haredi spokespeople convening among themselves and re-emerging later on to defend the public that was under attack. There will be a need to discuss the events that saw the city of Bnei Brak—the Tel Aviv of the haredim—suddenly transformed into the radical ultra-Orthodox Jerusalem neighborhood of Mea Shearim.

How did we get to this point?

We cannot discuss how this came about without mentioning the role of the media’s hegemony in fanning the flames and pushing for violence. Last week provided an excellent civics lesson on the power of the media to lead dramatic processes in Israeli society and tear it apart. The days leading up to the clash were marked by the mainstream media’s push for the police to “let the haredim have it already.”

If we want to understand the event, we cannot ignore the connection between the media’s incitement campaign that demanded the police lay into the haredim and the police “obeying” its command, beating up even innocent haredi citizens who were not to blame for the actions of a small group of disturbed and malignant counterparts.

That’s how it works. The hegemony is unaware of its hegemony, and so are we. That’s why we absolve it of all responsibility, but it has great power to steer the policies of the police and other institutions.

Report after report, broadcast after broadcast, the demand was made that the Israel Police clash with the haredim, and that is what ultimately took place. While the media hegemony is not the only, or even central, factor responsible, its role in getting us to this point in haredi-secular relations, and at a time when there was a chance for things to turn out differently, cannot be ignored.

The most frustrating part of the decision by police to look the other way at haredi violations of coronavirus restrictions, much as it did with violations by those protesting against Prime Minister Benjamin Netanyahu, is that it is part of a smart policy that takes into consideration that sometimes, there is no other choice.

Anyone who has seen the images from that night in Bnei Brak, or other attempts by the police to enforce the coronavirus guidelines through force, can clearly see that what is taking place contributes nothing to the battle being waged against the pandemic. The opposite is true: Clashes such as these increase the risk of the virus’s spread, because every time the police try to forcefully disperse a small gathering at a synagogue, half of Bnei Brak shows up for a mass-infection event that puts not just all of the haredi residents and their families, but the police officers and their families, unnecessarily at risk.

So why is the media hegemony pushing for that in the first place?

Caption: Israel Police officers clash with haredim during a protest against the enforcement of coronvirus lockdown restrictions in Bnei Brak on Jan. 24, 2021.
Photo by Tomer Neuberg/Flash90.

Palestinian premier: ‘If ICC indicts Israel, we can take US firms to court’

Courage was the reason campus anti-Semites were beaten