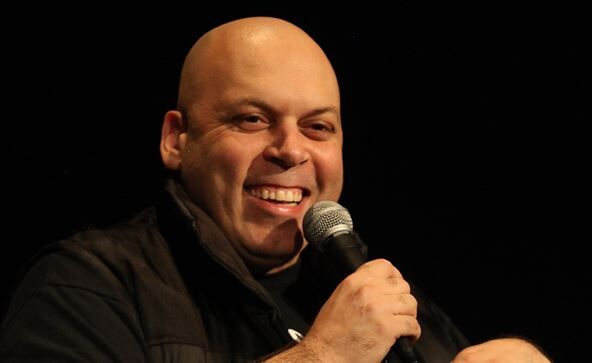 Amer Zahr, Israel-basher and self-styled comedian, recently outed himself as an Israeli citizen while spreading lies about a routine sticker placed on his Israeli passport by authorities at Ben Gurion Airport.

The lies are no laughing matter, however, as Zahr falsely claimed that a yellow sticker with a bar code and series of numbers indicated he was a security threat, spreading the falsehood to his close 100,000 followers on Instagram.

On Monday, he described flying out of Israel’s Ben-Gurion Airport. Zahr claimed that a yellow sticker with a “6” means you’re a “security threat,” “i.e. not Jewish,” posting a photo of the sticker affixed to his passport.

Instagrammers were quick to challenge Zahr.

“Please stop spreading lies. The yellow sticker is for everyone. At least be honest with your content. Thanks,” commented SashaJade1.

Danibptak responded, “I’m Jewish, Brazilian and have a lot of these stickers. Are you crazy??”

And Ilya7703 wrote, “I’ve had a yellow sticker on my passport when traveling and guess what I’m Jewish. You’re just lying to push an agenda. Give up your citizenship if you hate Israel so much.”

Although Zahr’s humor is popular with fellow Michigan Palestinian Congresswoman Rashida Tlaib and has introduced Bernie Sanders at campaign events, his Israel-bashing record is no laughing matter.

Zahr has urged people to stop condemning anti-Semitism, claimed that Israel uses Palestinian prisoners as “lab specimens,” accused Israel of apartheid and ethnic cleansing, and has defended Rep. Ilhan Omar’s anti-Semitic rhetoric. He supports the Boycott, Divestment and Sanctions campaign against Israel and advocates a single bi-national state of Jews and Arabs.

And yet, he enjoys all of the rights of an Israeli citizen, nonetheless.