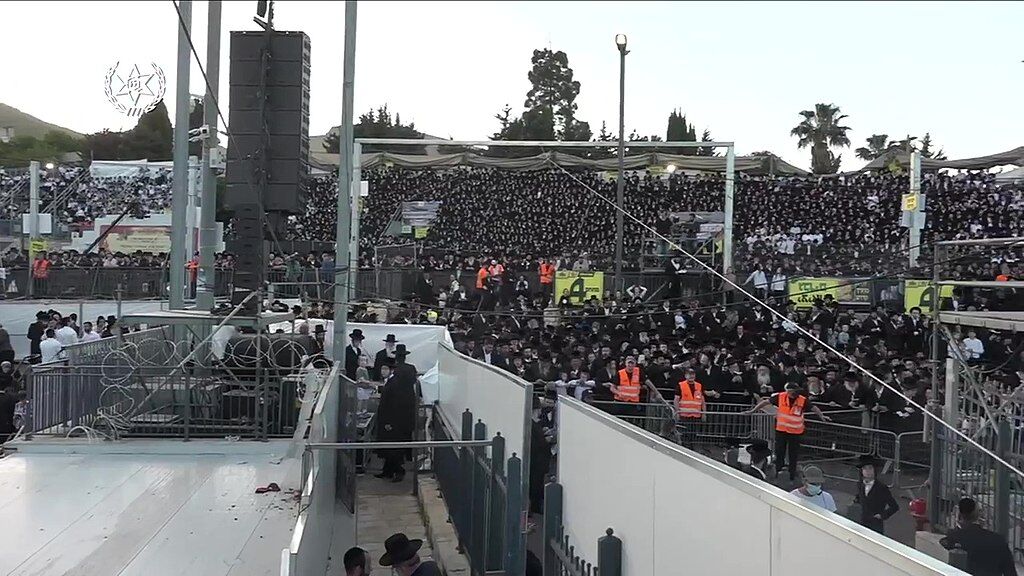 The April 30, 2021 disaster at the Lag B'Omer festival left 45 dead and 150 wounded. With this year’s gathering only days away, the plaintiffs’ lawyer contends the state has learned nothing from the tragedy.

The families of those who died in the 2021 Mount Meron disaster have filed a lawsuit against the government, emergency services and several private organizations that greenlighted the Lag B’Omer festivities that ended in the tragic death of 45 people and left 150 others injured. The plaintiffs are demanding 4 million shekels ($1.2 million) in compensation for each family.

The victims included six Americans, two Canadians, an Argentine and a Briton, and ranged in age from 13 to 65.

The April 30, 2021, stampede took place during the annual pilgrimage to the tomb of Rabbi Shimon bar Yochai in northern Israel, which an estimated 100,000 worshippers attended.

The deadly incident took place after celebrants poured out of one section of the mountainside compound, down a passageway with a sloping metal floor wet with spilled drinks, leading to a staircase continuing down.

Witnesses say that people tripped and slipped near the top of the stairs, while those behind, who were unaware of the blockage ahead, pressed forward. This resulted in people being trampled, crushed and asphyxiated, according to the official investigation into the disaster.

The lawsuit names the Israel Police, the public security, interior, religions services, economy and tourism ministries, the National Administration for Holy Places, the Israel Fire and Rescue Services, Magen David Adom, and the Merom HaGalil Regional Council, as well as the Ashkenazi and Sephardi religious administrations on Mount Meron, and the two engineering companies who approved the bleachers and ramp on the premises.

The suit was filed two days ahead of the first anniversary of the disaster, and on the heels of the police announcing unprecedented security measures for this year’s festival, slated to be held on May 18.

The plaintiffs’ lawyer, Eran Becker, accused the state of gross negligence, saying that the various safety hazards and code violations on the premises were known for a decade, but a political power struggle over control of the holy site resulted in its prolonged neglect and eventually, the tragedy, “which could have avoided and should have been prevented.”

“To date, there is no clear determination as to who is responsible for safety in these incidents. The state has continued to ignore the dangerous situation, showing indifference to the potentially devastating results. The next disaster is only a matter of time,” he said.