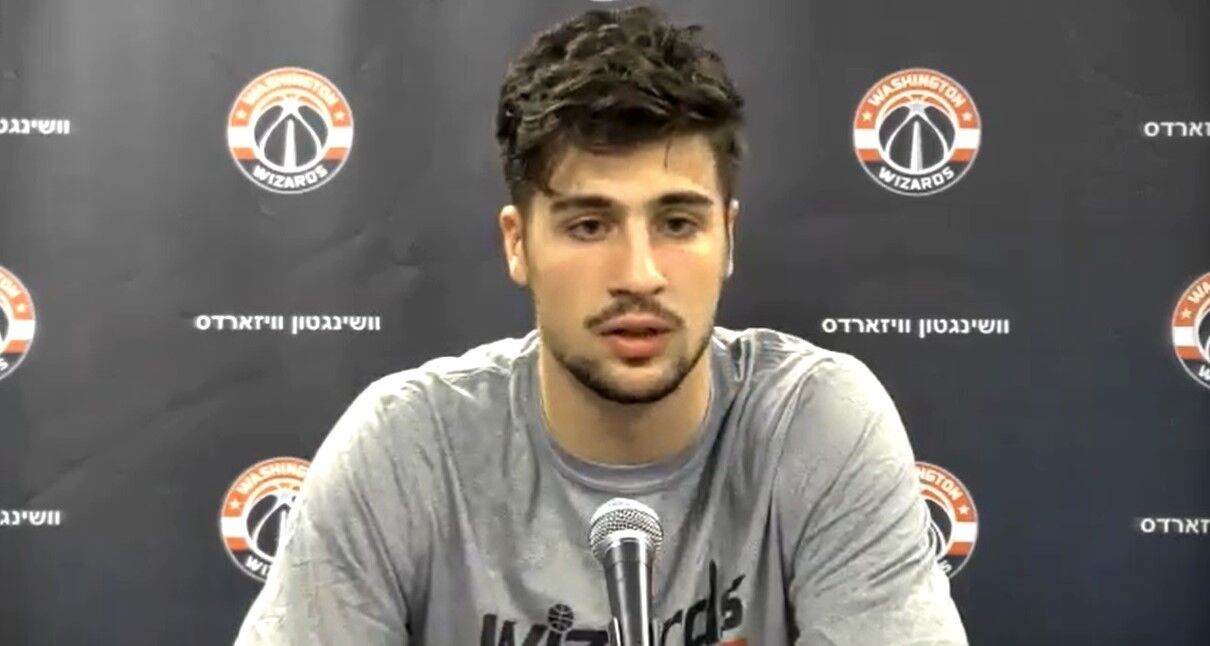 The 20-year-old scored four points, had three rebounds and one assist in only 16 minutes of play. Nevertheless, the Wizards lost to the Knicks 117-99.

Deni Avdija, the only Israeli player in the NBA, returned to action on Saturday night after a longer than expected recovery and rehabilitation from an ankle injury earlier this year. The Washington Wizards faced the New York Knicks in a preseason game; it was the second preseason game for the Wizards but only the first for Avdija. He scored four points, had three rebounds and one assist in only 16 minutes of play. Nevertheless, the Wizards lost to the Knicks 117-99.

Despite the loss, Avdija, 20, was happy to be back in action, saying “it feels good to be back. It is a good first step to get it going, to get two baskets, to get in the rhythm.”

He made a layup on a fast break from teammate Raul Neto, 29, and he made a second basket after a pass from team star Bradley Beal. “You need to start with something,” he said. “It felt good.”

Wizards Coach Wes Unseld was generally pleased with Avdija’s performance, though he pointed out some areas in need of improvement. “For the most part, he was good,” he said. “He had some missed assignments. And using his voice will be a constant theme for him. We have to prod him a little bit to do it.”

In the Oct. 9 game, Unseld worked to have Avdija play continuous minutes. “It was Deni’s first crack at it. We wanted to make sure he had extended runs and didn’t want to chop up his minutes too much.” Unseld has reported throughout the pre-season that Avdija is ready to play but wants to ease him in slowly. He will continue to monitor his minutes.

While Avdija is pleased with how hard he worked on his rehabilitation and conditioning, and how much his coaches and trainers have invested in him. He acknowledged that it has been difficult being away from the game—since April 21, when he got hurt—for so long. “I missed basketball. I missed being on the court. I don’t take anything for granted. I enjoy every moment of being with teammates, coaches and fans. Hopefully, we’re going to have fun this season.”

Avdija noted that he enjoyed playing in Washington in front of actual spectators. “The atmosphere changed; we have some fans now,” he said. “I can see people in the stands. Those things felt good.”

He also feels more relaxed not being a new player. “I wasn’t as ‘shocked’ as in my first year. Some players I came up against last year, it wasn’t easy. In the second year, you know where you are—you know the arena, you’ve seen all the teams and all the defenses in the league. I feel more experienced—mature, stronger and better.”

Yet there are challenges ahead as he eases back this season. Avdija is aware of what he needs to do to get ready for the 82-game regular season, which runs from October to April.

“The first thing I wanted to experience was the pace of the game. I have to get used to the pace and physicality and playing defense, and having energy running up and down and going through plays. I’m not going to lie—it wasn’t easy for me,” he acknowledged. “It’s not easy coming in after six months. My body needs to adjust.”

The Wizards have two more preseason games before starting their regular season on the road against the Toronto Raptors on Oct. 20.