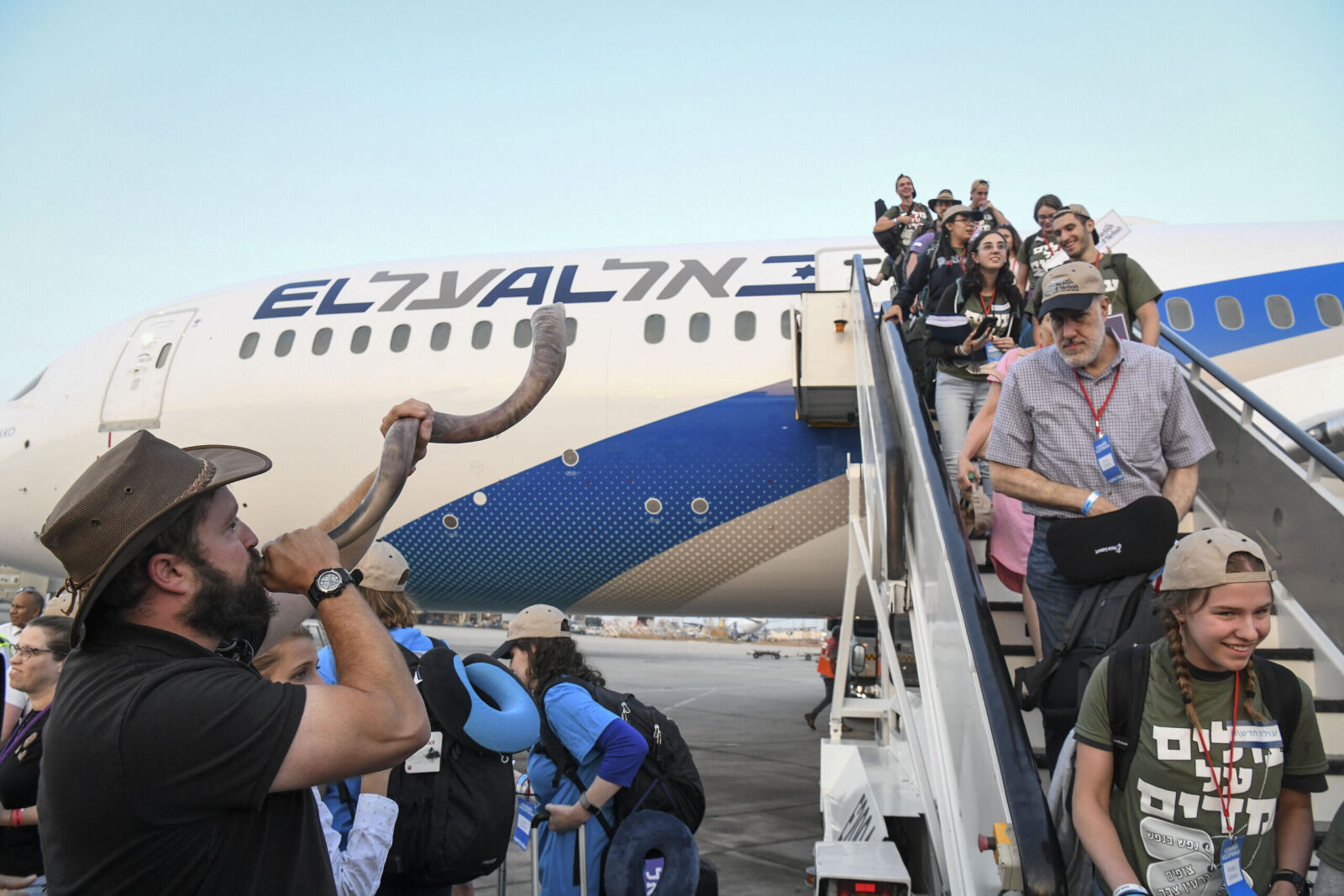 Will the “new refuseniks”—idealistic young U.S. Jews with Soviet roots—ultimately have to consider leaving America, as we left the USSR?

Young Jews of Soviet origin have recently burst onto the national scene as staunch American defenders of Israel and unapologetic dismemberers of anti-Zionist (read: anti-Jewish) propaganda. Izabella Tabarovsky has referred to them as “the new refuseniks.” Organizations such as Club Z, Students Supporting Israel (SSI) and others devoted to fighting for Israel have been propelled into existence and largely populated by children and grandchildren of Soviet Jews. This phenomenon is a celebration of new wellsprings of Jewish endurance and resistance. It is also a rueful reminder of how much the landscape of American Jewish life has changed over the past decade.

As I learned about these new immigrant voices of Jewish strength and dignity, I was overcome by a mix of pride, nostalgia and sadness. I found myself traveling down memory lane to my own refusenik past, and especially the two years leading up to my family’s flight from the former USSR. I was 18 and then 19 in 1986 and 1987, and my parents could no longer contain my youthful desire to join them and other refusenik activists.

Even after 35 years in America, the refusenik legacy continues to define my outlook on politics and society. When I was a teenage refusenik, the identity of the vast majority of Soviet Jews was a product of both destiny and choice. The choice was made for—and forced upon—us through a combination of nationalist policy; suppression of almost anything self-consciously Jewish; stick-and-carrot assimilationism; and state-sponsored anti-Semitism. But there were Soviet Jews—zealots, fighters, nonconformists—who dared make their own choice in forging their identity and the identity of their children.

In English the term “refusenik” is an imperfect calque of the Russian “otkaznik” (literally: one who was refused). It has gained both a translingual political irony and a greater degree of political activism in translation: It was the Soviet system that refused to honor its constitution and respect human rights. Refuseniks only refused the ticket to Soviet paradise, a paradise of silenced, stifled and strangled voices. In demanding to be allowed to emigrate—and in living out Israel’s commitment to gather all the Jews—Soviet refuseniks openly challenged the Soviet regime.

They also showed their fellow countrymen how to fight for their inalienable rights. In defiance of Soviet double-speak, refuseniks said plainly and clearly that they wanted nothing to do with that system and that country: not to ameliorate it (as the dissidents aspired) or bring it down, but to disavow it and take leave. This refusenik legacy, with its militant spirit and its rejection of the prescribed historical narrative of Jewish Soviet happiness, now lives in the countries and communities where it is impossible to imagine daily life without ex-Soviet Jews and their children and grandchildren, mainly the United States and Israel.

Which brings me back to “the new refuseniks” and the prospects for Jewish life in America. What were these young American Jews refused, and, by the same token, what have they refused?

It’s easier to answer the first question: Over the past four or five years, they, like other Jewish students, were refused numerous opportunities to be themselves, to express their Jewishness fully and completely in the public mainstream—in the high school classroom, on the college campus, in the social media. These young Jews saw their very Jewishness, with its deeply ingrained commitment to Israel, repeatedly cancelled. It was pounced on by some of their classmates and teachers as their schools and colleges stood silent and while some of the mainstay Jewish organizations and congregations looked the other way.

It’s harder to answer the second question, as refuseniks do not simply refuse to accept the status quo. In order to bring the legacy of refuseniks to its full semantic fruition and historical logic, the “new refuseniks” would not only have to fight for Israel and against anti-Semitism. They would ultimately have to consider leaving America.

I imagined these high school and college students who have mastered the political tools and the Krav Maga moves of fighting anti-Zionists and Jewish detractors of various intellectual shades and ideological stripes. And I couldn’t help but wonder if deeming these young zealots the “new refuseniks” doesn’t in fact augur an eventuality that their Soviet-born parents and grandparents may not be prepared to accept. I’m speaking about ex-Soviet Jews uprooting themselves again, leaving behind their nests in America and Canada, and making aliyah.

Let me backtrack and briefly recollect my own Jewish American journey. In the spring of 1987, after years of living in refusenik’s limbo, my family received permission to emigrate. My parents and I decided to settle not in Israel but in the United States. At the end of the Reagan era, the future of Jews in America looked particularly bright, especially so for a 20-year-old acculturated Russian Jew from Moscow. Well do I remember then the prevalent thinking: in America anti-Semitism had been relegated to the farthest margins and only festered in the dirty skin folds of the country’s underbelly. For many years, my personal experience with anti-Semitism in America had generally confirmed my original expectations.

There was the occasional comment, pronounced sotto voce, about Jews not wanting Christmas trees in front of town halls. There was some hate mail I received in connection with my role in the Jewish Studies program at my Catholic university. And there were venomous remarks coming from academic colleagues, the predictable spits of intolerance disguised as “legitimate criticism” of Israel. The texture of daily life hasn’t changed for me as a Jew, and yet, as Saul Bellow might have put it, it somehow feels different being a Jew in America. I have been experiencing these changes increasingly since 2017.

If I were to describe them to someone not too familiar with the situation, as I recently did to an Israeli relative as we watched the sunset over Bograshov Beach in Tel Aviv, I would say that the breathing room for American Jews is shrinking. The Jewish living space in America is being transgressed by actions and reactions coming from both the extreme political right and from the extreme political left. There’s Charlottesville and the bacchanalia of Trump-indulged white supremacy. But there are also rabidly anti-Zionist Democratic members of Congress spreading their tentacles over America’s political mainstream and employing a particularly crude version of Marxist-Soviet anti-Semitism. These right-wing and left-wing extremists have no problem unleashing their rage by scapegoating America’s Jews.

A politically conservative cousin of mine, a great friend of Israel, told me a few months ago: “You would feel more comfortable in the Republican Party.” As an ex-Soviet Jew and a former refusenik who holds liberal values central to my worldview, I cannot be cajoled into an alliance with the party of Trump, even though I realize that in Congress some Republicans enact real support for Israel. At the same time, after having voted Democratic in all the elections since Clinton-Gore ’93, I find it difficult to support the Democratic Party, whose far-left wing is at war with the soul and body of the Jewish people.

I jubilated at Trump’s defeat, but I also “fear[ed] the worst,” to quote Robert Frost’s “Peril of Hope.” I feared the new Jewish American normal of living “betwixt and between.” Having more or less fended off the threat of totalitarianism coming from the radical right, the country now faces the rising tide of totalitarianism from the radical left. The flames of anti-Semitism—whether it disguises itself as “anti-Zionism” or unabashedly attacks Jews based on ethno-socio-cultural parameters—were emblazoned on American mainstream culture and media during the recent military and social turbulence in Israel.

What a year and a half of COVID-19 had compounded and pressurized, the May 2021 Gaza-Israel military conflict threw into the sharpest relief. It’s getting harder and harder for American Jews to make their home in the traditional quarters of the political landscape. Here, I’ve come to the bitterest reflection. I type these lines feeling more politically lonely than I’ve ever felt since my family made America our new country back in the summer of 1987.

I regard with awe those Dostoevskian, idealistic Jewish boys and girls, “the new refuseniks.” They are young and buoyant with hope that they will succeed in protecting their Jewish living space and staving off the onslaught of anti-Zionism. I recognize that they are from a different American generation, a generation to which my own teenage daughters also belong. But what of their grandparents and parents, the old refuseniks? How can they, how can we, also feel hopeful? Perhaps the loneliness I feel could be thought of as the loneliness of an exile or a poet. And I confess that at times I’ve associated it with an acute pandemic-induced funk. But I don’t think what I’m feeling is about culture or epidemiology.

I’ve come to think of my existential condition as the loneliness of an American refusenik. This refusenik feels an urge to lean, yet again, on Ivan Karamazov’s inflection, and to return the proverbial ticket to paradise—the hard-earned ticket to the American dream. This time, however, living in Israel will no longer be a Soviet Jew’s hesitant choice, but an American refusenik’s manifest destiny.

Maxim D. Shrayer is an author and a professor at Boston College. His recent books include “Voices of Jewish-Russian Literature” and “A Russian Immigrant: Three Novellas.” Shrayer’s newest book is “Of Politics and Pandemics.”