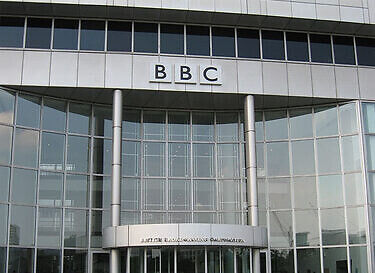 For years, it has uncritically recycled Palestinian propaganda as innately credible and true, while treating demonstrably factual Israeli statements as mendacious propaganda.

In recent weeks, there have been indications that the British government intends to try to bring the BBC to heel.

The prime minister, Boris Johnson, is responding to public irritation with what is seen as the BBC’s left-wing group-think over a range of issues ranging from Brexit to Black Lives Matter and from conservatism to Greta Thunberg.

He believes that the BBC no longer reflects the lives and attitudes of ordinary people in “middle Britain,” but amplifies instead the “wokeish” worldview of the intellectual and administrative classes. I regularly appear on the BBC, but only as the representative of a conservative viewpoint to provide what producers consider to be “balance.” But the left-wing mindset is so pervasive it overwhelms any such voices.

Now the prime minister reportedly intends to install as the BBC’s chairman someone who is prepared to challenge its embedded leftism.

If it’s doubtful whether this as yet unknown individual will have any degree of success, it’s vanishingly unlikely that it will change the BBC’s appalling treatment of Israel.

For years, it has presented Israel in the most distorted way, portraying it falsely as the rogue state in the region while downplaying or ignoring the attacks on Israelis and the incitement and anti-Semitism that are daily features of Palestinian Arab life.

The most recent example of this BBC mindset concerns a Jordanian-born Palestinian terrorist, Ahlam Tamimi. In August 2001, she handed a guitar case filled with explosives to an accomplice who detonated it in the Sbarro pizzeria in Jerusalem, murdering 15 people, seven of them children, and wounded more than 130.

Tamimi has repeatedly gloated over what she did. She was given 16 life sentences, but was released in a prisoner swap after only 10 years. Since then, she has lived in Jordan, where she hosts a talk show on the Hamas-affiliated Al-Quds TV.

Her husband, Nizar Tamimi, is himself a terrorist who participated in the murder of Israeli civilian Chaim Mizrahi in 1993 and who was forced by the Jordanian authorities to leave Jordan for Qatar.

The United States wants Ahlam Tamimi to stand trial on federal terrorism charges in Washington. It has repeatedly but unsuccessfully pressed Jordan to honor the extradition treaty signed between the Clinton administration and the current king’s father, King Hussein.

Last week, BBC Arabic TV broadcast an item which sympathetically presented the story Tamimi wanted to tell about herself.

This six-minute item, titled: “Ahlam Tamimi, your voice is loud and clear,” was framed as a sentimental human interest story which whitewashed the murderous activities by both Tamimi and her husband, and presented them as victims of censorship and the Americans.

A few days previously, a Jordanian radio host had reportedly cut her off while she was making an on-air plea to King Abdullah II to let her husband back into Jordan.

The BBC program concluded with a video of Ahlam Tamimi addressing the king for a second time, enabling her to make the plea which Jordanian radio had censored.

The media watchdog CAMERA UK has observed that the program made no criticism of either of the Tamimis. None of those who were murdered in Ahlam Tamimi’s terror attack was mentioned. The item said she was merely “accused of involvement” in the Jerusalem bombing (despite her own public admission of the crime) and failed to mention the reason for her husband’s imprisonment at all.

The true wickedness of the Tamimi item is that it was broadcast on the BBC’s Arabic service. The BBC’s foreign-language services have a global reputation for broadcasting supposedly factual, trustworthy information to countries where objective news is in short supply.

Yet this item gave a platform to a heinous terrorist to spout her propaganda, thus confirming the lies about Israel and the West that incite the Arab world to hatred and violence. More specifically, it added to the mythology around her in Jordan which, despite its peace agreement with Israel, has a population consumed by hatred of Israel and the Jews and for whom the murderous Tamimi is a rock star.

This is hardly an isolated example. CAMERA UK, which focuses closely on the BBC’s anti-Israel bias, reports that since the beginning of the year the BBC News website covered only 5.3 percent of the terror attacks which took place against Israelis. In six of the first nine months, during which period there were 656 terror attacks against Israelis, the BBC reported on none of them.

CAMERA UK also observed how the BBC framed the Abraham Accords between the UAE and Israel in the most negative light. An edition of World Service radio’s flagship news and current affairs program Newshour downplayed this deal, said it hadn’t moved the dial at all on Israel “keeping millions of Palestinians under occupation,” and allowed a Palestinian spokesman to make baseless accusations about the “occupation” and “siege in Gaza” without challenge.

Last month, the Jewish Chronicle reported that the City of David organization had complained to BBC executives about Rosie Garthwaite, a senior BBC producer working on a new documentary about Israeli activities in eastern Jerusalem. Its vice president wrote she had “repeatedly presented us with one-sided and inaccurate statements” and that the program “intends to vilify Israel, Jewish history and Jewish charities and present a number of false and misleading claims.”

The paper also discovered that Garthwaite admitted sharing “inaccurate” pro-Palestinian propaganda on social media and had shared several other false or controversial claims about Israel, including attacking “British duplicity” over the signing of the Balfour Declaration, wrongly suggesting Gaza’s “one” border was controlled by Israel and retweeting an article from Middle East Eye describing the troublemaker Ahed Tamimi as an “icon for Palestinian resistance.”

These are but a tiny sample of the BBC’s institutionalized hostility towards Israel. For years, it has uncritically recycled Palestinian propaganda as innately credible and true, while treating demonstrably factual Israeli statements as mendacious propaganda.

It systematically downplays or disregards Palestinian attacks on Israelis and generally treats any eruption of violence as a story which only “kicks off” (as one BBC reporter said gleefully during an escalation of hostilities) when Israel retaliates with force. Israeli victimization is simply not seen as a story at all.

When Israel is forced to defend itself, the BBC frequently portrays its armed forces—the most ethical and human rights-obsessed military in the world—as monstrous child-killers and aggressive destroyers.

The immediate and demonstrable effect on the British population is hatred of Israel and a spike in attacks on British Jews. It is no exaggeration to say that when it to comes to Israel, the issue is not BBC bias. It is BBC incitement to baseless hatred.

The BBC is regarded around the world as a byword for objectivity and accuracy. That’s why its departure from those ideals is so pernicious.

Perhaps the most chilling thing about it, though, is this. BBC executives are genuinely, painfully aware of the news outlet’s unique power and reach, and of their duty under its founding charter to uphold objectivity and fairness and hold the line for the middle ground.

But they are simply unable to process the fact that they view Israel, among other issues, through a profoundly distorting ideological prism. And that’s because they believe implacably that the positions they hold are unarguably objective and fair, that they do represent the middle ground, and that therefore by definition those who claim the BBC is biased are themselves extremists and can be safely disregarded.

In other words, BBC group-think is a hermetically-sealed thought system. Which is why, if whoever takes over at the top wants to restore the once iconic BBC to elementary standards of objectivity, fairness and decency, they will have their work cut out for them.

Melanie Phillips, a British journalist, broadcaster and author, writes a weekly column for JNS. Currently a columnist for “The Times of London,” her personal and political memoir, “Guardian Angel,” has been published by Bombardier, which also published her first novel, “The Legacy,” in 2018. Go to melaniephillips.substack.com to access her work.

Netanyahu: ‘We’re increasing intensity and speed of our attacks’

The collapse of Israel’s dream-palace of normalcy

Hezbollah and its masters in Tehran bring darkness to Lebanon

UJA-Federation of New York to give $200,000 in COVID-relief aid to India

The rioters do not represent all Israeli Arabs