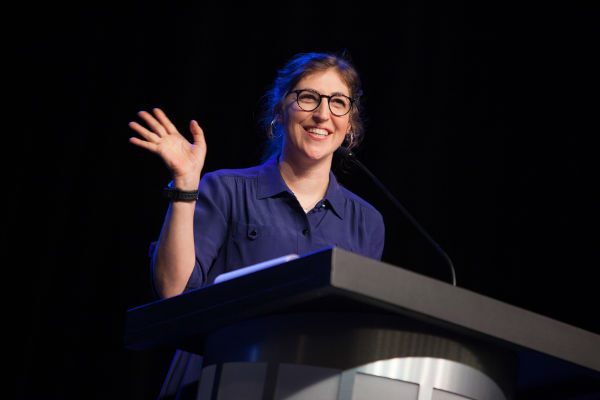 Mayim Bialik became the first orthodox Jewish woman to host an American TV game show when the producers of Jeopardy! tapped her and Mike Richards to host the popular program.

Richards, one of the show’s producers, will host the daily game show while the 45-year-old Bialik will host prime time and spin-off specials. The web site TMZ reported that Jeopardy! executives wanted to make Bialik the sole host, but she had other commitments.

“According to our Sony Studios sources … ‘The Big Bang Theory’ star became a frontrunner with bosses at Sony to permanently host the game show after guest hosting in March. On top of that, we’re told the crew loved working with her AND she also tested highest in focus groups,” TMZ wrote.

“Our sources say several Sony execs were ‘very interested’ in Mayim for hosting duties on the daily syndicated program, but because of her other commitments — she stars and executive produces ‘Call Me Kat’ on FOX, and hosts a podcast — they knew it wasn’t going to be possible.”

Jeopardy! is best known for demanding contestants to phrase their answers in the form of a question.

“Really really honored and astounded and excited for this – it’s beyond anything I ever imagined could happen,” Bialik tweeted after the announcement on Wednesday. She also paid tribute to her grandparents who immigrated from Eastern Europe.

Bialik, who got her first acting part at the age of 13, is best known for her roles in the TV shows Blossom, Big Bang Theory, and Call Me Kat. The latter show was renewed by Fox for its second season. Those shows, as well as Jeopardy!, are pre-taped so that she doesn’t have to work on Shabbat.

Bialik also completed a PhD in neuroscience from UCLA in 2007. She has often spoken out about anti-Semitism, BDS, science and religion, and personal observance.

She and Richards are replacing Alex Trebek, who hosted Jeopardy! for 37 years. Trebek died of cancer in 2020.