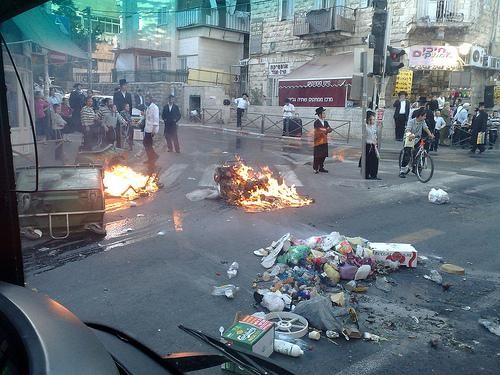 The protests blocking streets in Israel on Thursday were organized by Peleg Yerushalmi, some five percent of the Chareidi public. They are a marginal group, not tolerated by mainstream Chareidim. Chareidi yeshivot and other institutions will not hire such people, and their association with us (in the mind of the broader public) is causing untold damage to the wider ultra-Orthodox community.

This group have created an issue – that they are fighting to be able to sit and study Torah. Chareidim can already do that, and have done that since the foundation of the State. As a Chareidi, I want to thank the State of Israel for creating the various laws that have allowed this, even though it is a hugely contentious issue. I am not here to discuss the merits of this law here, or its fairness to others, only to point out that there has always been such a law.
But, there are many Chareidim who are not sitting and studying in a yeshiva. The late Rav Yosef Shalom Elyashiv, the great sage of the generation, was clear that these people have a choice – they can leave Israel or go to the army.

Indeed, an increasing number of Chareidim have chosen to go to the army. The army has special frameworks for them which includes Mehadrin Kosher food, prayer times and an hour of Torah-study every day.

The two Chareidim arrested for draft dodging were of this latter group, i.e. not studying in yeshiva. The police do not raid yeshivot and drag students to the army.

But the extremists have gone further in stoking the fires. They refuse to even go and get their exemption when learning full time.  They are deliberately making themselves illegal. This is a new idea, not acceptable to the main-stream Chareidim. Chareidim always got their exemptions legally. They didn’t challenge the State. They didn’t promote anarchy.

This new group represents a dangerous distortion of the beautiful and wise and sensitive Judaism I know. Theirs is a religion of us verses them, of protests and intimidation, of things that are anti-Torah. Mine is a Judaism of kindness and giving, of unity and spirituality, of softness and gentleness.