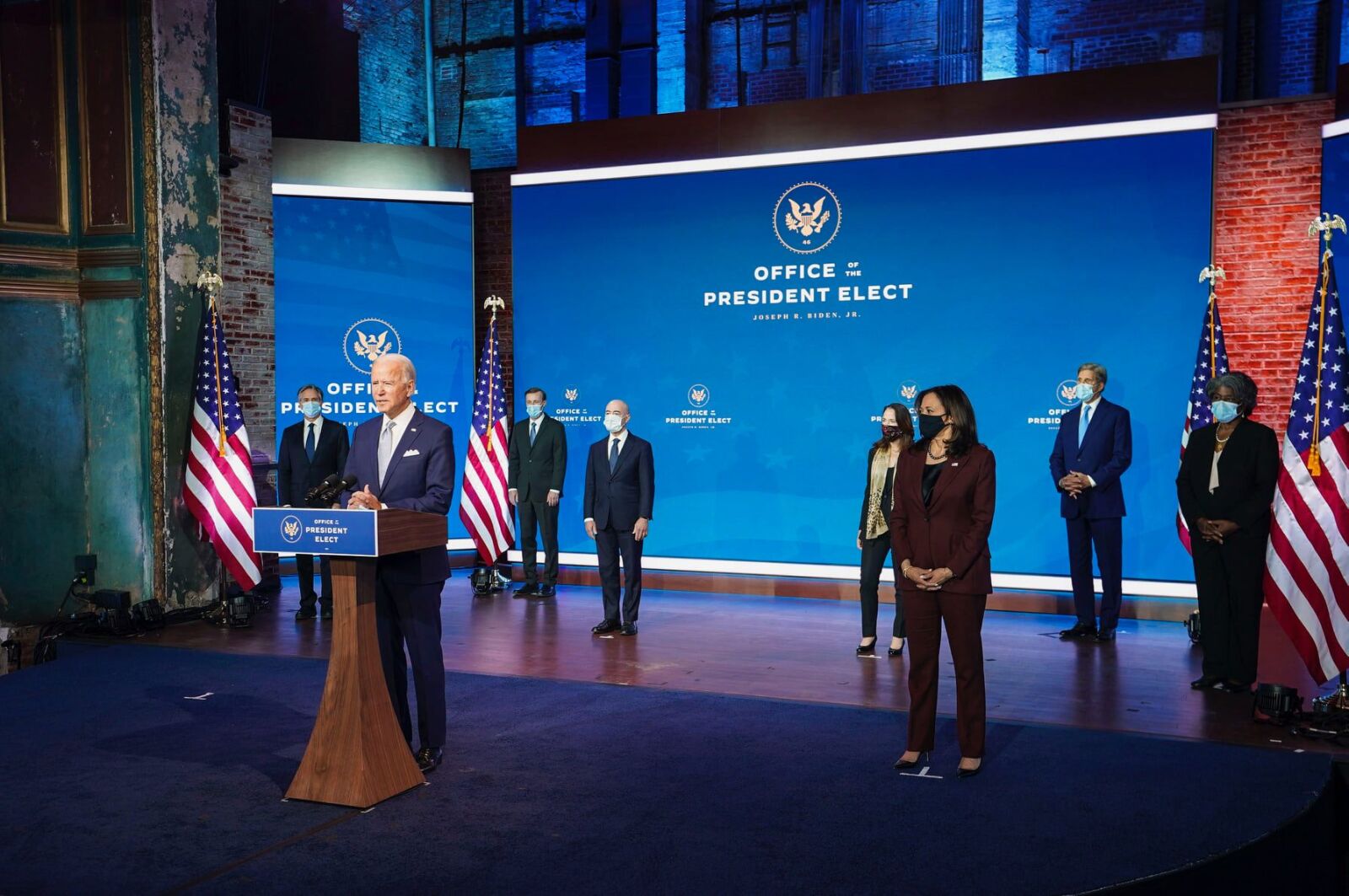 Joe Biden’s team consists of Obama alumni who know how to behave. But while their manners will be impeccable, they seem unlikely to be able to learn from their past errors.

Their sigh of relief was heard around the globe. The foreign-policy establishment’s nightmare is finally over, and the keys to the American government are back in the usual hands. After four years of President Donald Trump’s “America First” agenda being carried out by people who were outsiders just like their boss, President-elect Joe Biden is restoring the status quo. His selections were all members of the old club that had been running things before Trump blew into Washington in January 2017 determined to change everything.

But while that means champagne toasts at the United Nations, international agencies and Western European capitals, as well as reassuring editorials in liberal outlets like The New York Times and The Washington Post, it’s no guarantee that Biden is destined for success. That’s especially true if success for American foreign policy is defined by accomplishments that enhance the security of the United States and its allies, rather than in whether it is viewed favorably by those who don’t actually have America’s best interests at heart.

With a lineup of Anthony Blinken as U.S. secretary of state, Jake Sullivan as national security advisor, Linda Thomas-Greenfield as U.S. ambassador to the United Nations, Avril Haines as director of national intelligence, Alejandro Majorkas as secretary of the Department of Homeland Security and John Kerry as special presidential envoy for climate issues, the focus will be on reinstating not only the policies of the Obama administration in which they all served with Biden. It will also primarily represent a shift in tone.

That shift will mean more than just the absence of Trump-style bluster that outraged some U.S. allies and, above all, the sensibilities of diplomatic insiders and “wise men.” It also means adhering to conventional wisdom about issues like the Middle East peace process, in addition to how best to deal with potential threats from rival powers and rogue states.

The self-congratulatory remarks from Biden and his team reflected their belief that their return to power is a restoration of sanity and order after four years of chaos. Like so many of the critiques of Trump, their statements seemed at times to be rooted in notions about manners and class more than disagreements about policy.

And since it was Trump’s style and discourse, more than his actions, that was so hateful to the media and to voters who are part of the educated classes, it is unsurprising that Biden’s choices were cheered by these same groups.

Many Americans longed for Trump’s exit from the White House not just because they falsely believed him to be a threat to democracy. Nor was it only due to their credulous acceptance of the conspiracy theories about him promoted by both the Democratic Party and their mainstream media cheering section about Trump being a Russian agent of influence.

They also longed for the time before Trump when the United States was not regarded as the clown car of countries, and the laughingstock of international forums and European elite opinion.

That this golden age that Trump’s bombastic self-regard, coarse discourse, politically incorrect opinions and open disdain for the European and American governing and educated classes supposedly destroyed is a myth is beside the point. Other than brief moments of pro-American euphoria—such as the months during which Americans liberated Western Europe from Nazi Germany, the 1969 moon landing, the 1989 fall of the Berlin Wall or the immediate aftermath of the 9/11 attacks—there has been very little that united enlightened international opinion like detestation of America and all it represents.

That the United States has been hated more for its enormous successes as the most prosperous, the freest and the imperfect yet greatest force for good in the world than its admitted failures is very much to the point. Thus, Trump’s open disdain for the good opinion of the same people that Biden’s team seeks to ingratiate was actually common sense rather than rogue behavior.

As with just about everything else about Trump, his often ill-considered, off-hand remarks and tweets were mistaken for the policies he pursued. Far from an isolationist, Trump pursued a course of sensible American self-interest that sought to strengthen alliances that were good for America security, avoided unnecessary conflicts and stood up to actual threats that Europeans refused to face, like that of Iran.

While some treated Trump’s pro-Israel policies as an exception to his otherwise foolish foreign stands, his rejection of President Barack Obama’s belief in creating more daylight between the two allies actually symbolized exactly what “America First” meant in practice. Rather than going along with the experts’ conventional wisdom in which they continued to push Israel for concessions while enabling Palestinian rejectionism and terror, he threw out the rulebook. Moving the U.S. embassy from Tel Aviv to Jerusalem and confronting, as opposed to appeasing, the Palestinians was quintessential Trump. And not only did it not blow up the region, it actually led to normalization agreements between Israel and Gulf Arab states—something that Kerry and the rest of the old Obama crowd said could never happen.

That happened not in spite of the bad manners shown by Trump and his unconventional foreign-policy team, but because they dared to trash the experts and offend the Europeans.

What can the well-behaved Biden team do to match that? All they can promise us is, as Blinken noted, more cooperation with allies not named Israel or Saudi Arabia.

What will that do for American interests? Not much.

They will claim that what they do reflects American values and shared concepts about the need to nurture a global community rather than Trump’s transactional approach.

Rejoining the Paris Climate Accord and the Iran nuclear deal will be very popular in London, Paris, Brussels and Berlin, as well as in the halls of the United Nations. That will be in line with their predilection for multilateralism, and their ideological stands on climate change and avoiding confrontation with Islamists. But neither will make the U.S. stronger or richer or the world safer.

Nor will a return to the familiar tactics of muscling the Israelis to promote a two-state solution that the Palestinians still don’t really want widen the circle of peace that Trump’s more sensible and transactional approach helped create.

The change in attitude won’t make Russia, Turkey or Iran less aggressive or solve insoluble problems in Europe or the Middle East. And there is little indication that Biden’s team has any appetite for confronting China or seeking a shift in trade policies that will bolster America’s manufacturing base, as Trump at least tried to do.

It’s true that Biden’s appointees are a disappointment to the Bernie Sanders wing of the Democratic Party. The appointees may be left-leaning, but they are for the most part not the sort of radicals that will gratify the Democratic Socialists and BDS-supporters of “The Squad.”

By contrast, Biden’s team represents the sort of establishment thinking that always considers the illusion of momentum towards illusory goals of peace and cooperation to be its chief object rather than actually accomplish something to advance Western interests. The mentality that gave us the Iran nuclear deal is rooted in this superficial approach. It is why appearances and manners matter so much to them.

A well-behaved and internationally minded U.S. administration that seeks the approval of their diplomatic partners is exactly what the educated classes and Biden’s corporate donors crave. It can only be hoped that it will avoid egregious disasters like the Iran nuclear deal and not concede American interests—or those of Israel—in the process. But if good manners and the good opinion of people who don’t actually care about America or the Jewish state are what you want, then that is exactly what you are likely to get in the next four years.

Jonathan S. Tobin is editor in chief of JNS–Jewish News Syndicate. Follow him on Twitter at: @jonathans_tobin.