May 12, 2021 | News | Arab-Israel Conflict | Opinion | People | National
Who’s behind the disturbances in Jerusalem? 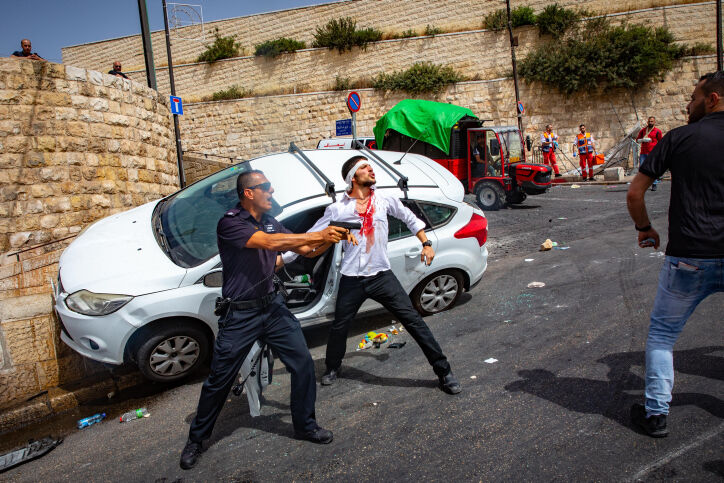 Jerusalem Center for Public Affairs via JNS
By Pinhas Inbari

Jordan, unfortunately, can be identified as one of the cooks stirring the pot.

If events in eastern Jerusalem were up to the local residents, they would try to contain the violence erupting around the Temple Mount, but it is not in their hands alone. Many cooks are stirring the pot.

What is really happening? Could the events on the Temple Mount lead to a new intifada, as events at the site were said to have sparked the “Al-Aqsa intifada” in 2000, or to regional escalation elsewhere? Who are the most active players?

Regardless, it is essential to note that the violence in Jerusalem was not spontaneous; it was clearly pre-planned. Firebombs were produced by Palestinian organizations, mounds of rocks and projectiles were stored in the mosques on the Temple Mount, along with fireworks that were used as weapons.

This was mainly the work of Hamas, but it was prompted by other Middle East players, as well. What we hear from eastern Jerusalemites does not coincide with what we hear from the external elements.

As tumultuous as the recent events at Al-Aqsa have been, we rarely heard nationalist slogans from the Palestinians, and saw relatively few Palestinian Authority and Hamas flags. Demonstrators called for “blood and fire to defend Al-Aqsa” and for Iran to “bomb Tel Aviv,” but they voiced no slogans about the establishment of a Palestinian state or Jerusalem as the capital of Palestine.

The local shebab (youth) fought for local reasons—first to reopen the amphitheater-type seating in front of Damascus Gate that the police had closed in preparation for Ramadan, and then in connection with a legal dispute related to real estate ownership in Jerusalem’s Sheikh Jarrah neighborhood.

An outside agitator: Jordan

Jordan, unfortunately, can be identified as one of the cooks stirring the pot. Its intelligence chief, who came to P.A. headquarters in Ramallah to persuade P.A. leader Mahmoud Abbas to drop the idea of holding elections, also “scolded” him for allowing many entities, such as Israel, to take over properties in Jerusalem. Immediately afterward, Jordan’s foreign minister arrived with documents to protect the Arab residents of Sheikh Jarrah facing an eviction order filed in court by Jewish NGOs. The United Arab Emirates and Turkey are also busy accruing real estate in Jerusalem. Jordan is spurring Abbas to shake his indifference and take action.

Indeed, we saw Abbas’s Fatah activists in Sheikh Jarrah and the Temple Mount, but what may be more worrisome was Fatah websites issuing a statement on behalf of the so-called “Mujahideen Battalions—the military wing of the Palestinian mujahideen”—about mobilizing to defend Al-Aqsa. It appears that a fictitious organization was invented to take responsibility for attacks planned by Fatah. The publishing of this incitement on Fatah’s website was no coincidence.

The Fatah broadcast appeared to be a response to a statement issued by the commander of Hamas’s military-terrorist wing in the Gaza Strip, Muhammad Deif, in which he threatened terrorism to defend Al-Aqsa.

The motives of Hamas and the Muslim Brotherhood

Regarding Hamas, it is important to note that Al-Quds (Jerusalem) and Al-Aqsa are the prominent motifs in the Muslim Brotherhood’s propaganda. They see Jerusalem as the future capital for the Muslim Caliphate—challenging the preeminent position held by Mecca in Islam.

The Saudis noticed that the slogans of the Brotherhood, the P.A. and Turkish President Recep Tayyip Erdoğan claim that the Al-Aqsa mosque was the first Muslim qibla (direction of prayer)—that is, it holds preeminence to Mecca. The issue of Jerusalem’s status vis-à-vis Mecca is among the main disputes between Saudi Arabia and the Muslim Brotherhood.

From within Hamas—a standout or man who surrendered his authority?

It should be noted that the leader of Hamas in Gaza, Yahya Sinwar, remains relatively silent. Today, the loudest Hamas spokesman is Deif, who is joined by members of Hamas residing outside of Gaza, like Ismail Haniyeh. They seek to lead the operation to “defend Al-Aqsa” through terrorism in Israel, Judea and Samaria, while Sinwar “settles for the action” of firing rockets at Israel to send a message that Gaza, not Jerusalem, is the main objective.

He wants to put Gaza at the center, while the Muslim Brotherhood wants to put Jerusalem at the epicenter. For Sinwar, Gaza is more important than Jerusalem, and he wants to prove that Gaza is leading the Palestinian problem, not leaders in the West Bank.

After the P.A. elections were postponed, the issue of Jerusalem became Abbas’s source of authority, and therefore he would not let it go.

It is also the source of the legitimacy of the king of Jordan, as the “guardian of the Muslim and Christian holy sites in Jerusalem,” including the Haram el-Sharif (the Temple Mount), a title held by the Hashemite kings since 1924. If he cannot protect Jerusalem, the Hashemite crown has no legitimacy to rule over Jordan either.

King Abdullah and Abbas have become allies, and they hope that the events of Jerusalem will undermine the Abraham Accords between Israel and other Arab countries.

It should also be noted that the Al-Aqsa plaza has become a source of tension between the two parts of the Islamic movement in Israel. Through the defense of the Al-Aqsa mosque, each side wants to prove its superiority over the other.

While the southern branch, headed by Israeli parliamentarian Knesset Mansour Abbas, cooperates with the religious authority on the Mount, the Waqf, Raed Salah’s northern stream challenges the Waqf. Members of the northern branch curse the moderate MK Mansour Abbas and carry the Palestinian flag with the Turkish crescent affixed.

Pinhas Inbari is a veteran Arab affairs correspondent who formerly reported for Israel Radio and Al Hamishmar newspaper. He currently serves as an analyst for the Jerusalem Center for Public Affairs.

Caption: An Israeli policeman fends off an angry Arab mob swarming an Israeli motorist, pelting his car with stones and driving him off the road, outside Jerusalem's Old City, May 10, 2021.
Photo by Olivier Fitoussi/Flash90.