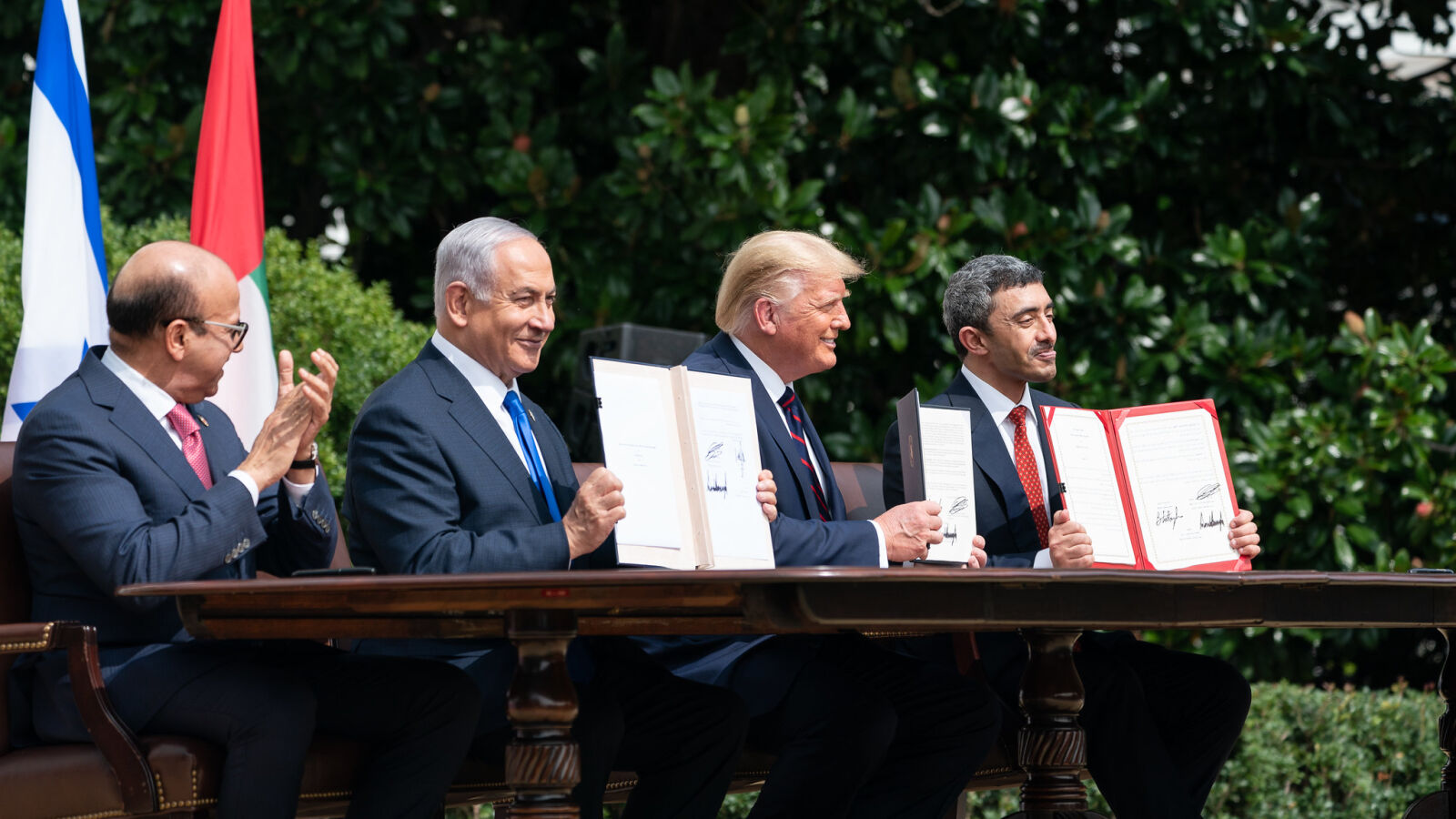 The U.S. president’s policies towards Israel and the greater Middle East may well withstand the tests of history.

Mainstream media and pundits from across the political spectrum have been quick to assert that the violent riot on the U.S. Capitol building on Jan. 6 has permanently tarnished the Trump presidency.

It remains to be seen what Trump’s historical legacy will actually be as a turbulent 2020 seems to be carrying over into a turbulent 2021, in which the stability of America’s democratic foundations will be put to the test.

Yet for all the global and domestic chaos last year, one major geopolitical accomplishment stands out above all others: The Abraham Accords.

The normalization agreements signed between Israel and the United Arab Emirates, Bahrain, Morocco and Sudan—with the tacit approval of Saudi Arabia—are seminal events that outgoing Israeli Ambassador to the United States Ron Dermer, who helped negotiate the accords called, “the beginning of the end of the Israeli-Arab conflict.”

An Israeli position of strength

The accords came about for several reasons. First is the continuously growing economic, diplomatic and military strength of the State of Israel. Under the leadership of Prime Minister Benjamin Netanyahu, Israel has emerged as a regional superpower with a burgeoning economy, superior military intelligence and cyber security, powerful air force and advanced missile-defense systems.

While Arab states continuously conspired to defeat the Jewish state in the early decades since Israel declared independence in 1948, it is clear to all in the region that Israel is here to stay. The Jewish state has proven that it will do whatever it takes at any time to defend its existence and guarantee its survival.

Similarly, as an advanced technological power, Israel continues to develop solutions to the world’s most pressing concerns, including medical and pharmaceutical research and development, the ability to desalinate seawater for drinking, and creating clean and efficient forms of energy, including solar power.

Second, the Palestinians have done little to advance their own cause since the signing of the now-defunct Oslo Accords of the early 1990s. While Israel developed into a regional power, Palestinians have squandered billions of dollars in foreign aid, eschewed economic partnerships with Israel and funded a corrupt kleptocracy led by Palestinian Authority head Mahmoud Abbas, who is now in year 17 of a four-year term.

Gulf states increasingly began to recognize that pouring more funds into the Palestinian cause was a bad investment, especially compared to the growing lure of Israeli commerce and technology.

The third reason is that Gulf states recognized that under Democratic Party leadership, the United States was no longer a trusted broker of peace in the region. Former President Barack Obama’s rapid abandonment in 2011 of former American and Israeli ally, Egyptian President Hosni Mubarak, and subsequent support for Mubarak’s Muslim Brotherhood replacement Mohammed Morsi sent a chilling message throughout the region that alliances with the United States were by no means permanent. Obama’s professed respect for Turkey’s President Recep Tayyip Erdoğan, another of the region’s most malign actors, sent a similar message.

Perhaps the greatest accomplishment of the Trump administration was to sever that unholy alliance.

The Obama doctrine was on full display when America entered the ill-fated 2015 Iran nuclear deal—the Joint Comprehensive Plan of Action, or JCPOA. The flushing of Iran with $150 billion, including billions of dollars delivered in hard cash, put the entire region on notice. Iran was essentially rewarded for its relentless pursuit of regional hegemony, funding and arming terror proxies in Yemen, Iraq, Syria and Lebanon, and simultaneously pursuing the development of illicit nuclear weapons and ballistic missiles. Gulf states quickly recognized that new regional alliances were necessary to counterbalance Iran’s malign influence.

It was Netanyahu’s bold opposition to the JCPOA and Iran’s malign influence that demonstrated that Israel was capable of taking its own national security and regional security seriously, despite the misguided efforts of the Obama administration. This opposition included a highly controversial but now prescient address to a joint session of Congress in 2015, as well as a full-throttled campaign of attacks on Iranian military installments and personnel—some from the air, others on the ground and yet others covert. The most high-profile episode proved to be the confiscation of an archive of nuclear plans from a secure military location in Tehran and its airlift to Israel in 2018, which Netanyahu soon made public to the world.

New approach to the Middle East

While Biden supporters, Republican elites and mainstream media are now quick to call everything that Trump laid his hands on an outright disaster, his administration’s approach to the Middle East was innovative, refreshing and will ultimately stand the test of time.

Led by the efforts of presidential senior adviser Jared Kushner, Secretary of State Mike Pompeo, special envoys Jason Greenblatt and Avi Berkowitz, Treasury Secretary Steven Mnuchin and U.S. Ambassador to Israel David Friedman, the Trump administration worked to change longheld paradigms in the region. The approach was straightforward: hold malign actors responsible by withholding aid and denying economic opportunities, reward those who pursued and advanced peace, and apply the forces of a free market to forge economic alliances between countries with similar challenges and interests.

After laying the groundwork during the first three years of the Trump presidency, the results in 2020 were monumental, culminating with the signing of four separate accords in rapid succession between former longtime enemies of the Jewish state.

Unlike many of the other accomplishments of the Trump administration, which may now be reversed by an incoming Biden administration, the new alliances are likely to be permanent. Furthermore, Trump has indicated that as many as 10 countries were considering similar accords. Future signings remain likely.

Back into the JCPOA

Meanwhile, Iran continues its illicit nuclear-weapons program at full speed, recently announcing that it will cross the threshold of 20 percent enriched uranium, putting it on a fast track towards the amounts required for a nuclear payload.

The entire region is now on notice. The same distrust of the Obama administration by Middle East nations now genuinely seeking peaceful coexistence is likely to only grow in the months ahead. And the rapid accomplishments of the Abraham Accords, including billions of dollars in new commercial enterprise, demonstrate an alternative path forward.

Israel benefited to a great degree by the policies of the Trump administration. During his four-year tenure, America recognized Israeli sovereignty in its capital city of Jerusalem and over the strategic Golan Heights. Trump delivered on the nearly unanimous bipartisan legislation, passed originally in 1995 to move the American embassy to Jerusalem. And America recognized that suburban Jewish housing in Judea and Samaria are not causes for conflict in a region filled with terror supporters.

Israel now braces for an incoming administration that may seek to punish Trump allies, re-enter the JCPOA, restore the standing of the Palestinian Authority, and allow the United Nations and the International Criminal Court to pass resolutions aimed at harming the standing of the Jewish state. Yet just as Netanyahu successfully parlayed the original Iran nuclear deal into Israel’s most stunning diplomatic accomplishments in decades, Israel is now in much stronger position to face the challenges looming on the horizon.

Israel’s left-leaning media, which campaigns relentlessly against the Jewish state’s longest-serving prime minister, now seeks to heap Netanyahu’s unparalleled legacy with the murky legacy of his close American ally. Yet Netanyahu will likely be judged favorably for working closely with the American president to improve Israel’s standing over territories it has long controlled, and across the greater Middle East.

And regardless of how Trump’s domestic and foreign-policy record will be portrayed into the future, his administration’s policies towards Israel and the greater Middle East may well withstand the tests of history. Israel, as well as UAE, Bahrain, Morocco and Sudan have much to be grateful for.

Could A New Israeli App Help Tackle COVID-10 Tracing In the Workplace?

What would hiring Robert Malley say about Biden’s plans on Iran?

‘Freedom for Humanity:’ A Cautionary Tale

Tu B’Shevat: An annual reminder to appreciate the beauty of the land of Israel

On the same day he preached unity, Biden went the other way